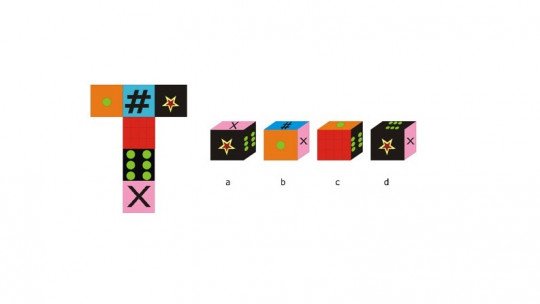 The human mind is something very mysterious , so we have tried to discover what are the mechanisms involved behind its functioning. Cognitive psychology has performed several experiments in which they have tried to elucidate the unknowns behind our thinking.

One of the questions that this branch of psychology has tried to solve has been how we humans manage to process and interpret images that are presented to us inverted or turned and still see them for what they are.
Roger Shepard and Jacqueline Metzler posed this in 1971, and approached it experimentally, conceiving the concept of mental rotation .

Let’s see what this idea is all about, and how these researchers went deeper into it through laboratory experimentation.

What is mental rotation?

In 1971, at Stanford University, Shepard and Metzler conducted an experiment that would catapult them to fame within the field of cognitive sciences . In this experiment they presented the participants with pairs of three-dimensional figures with different orientations. The task for the participants was to indicate whether the two figures presented in each trial were identical or whether they were the mirror image of each other.

As a result of this experiment it was seen that there was a positive relationship in terms of the angle at which the figures were presented and the time taken by the subjects to answer. The greater the degree of inclination of these images, the more difficult it was for them to indicate whether or not the figures were identical.

Based on these results, it was hypothesized that, when images are presented whose angle is not the one usually shown (90º, 120º, 180º…), what we do mentally is rotate the figure until we reach a degree of inclination that is “normal” for us . Based on this, the more inclined the object is, the longer it will take to rotate it mentally.

Shepard and Metzler, from all these findings, assumed that the rotation process involved going through a series of steps. First, the mental image of the object in question was created. Then, this object was rotated until it reached the inclination that would allow the subsequent comparison and, finally, it was decided whether or not they were two identical objects.

Shepard and Metzler, by means of their already famous experiment, started to tackle mental rotation experiments investigating different variables. During the 1980s a new concept emerged from the experimentation of these two researchers, the idea of mental imagery . This term refers to the ability to mentally manipulate the position of objects, after having made a representation of them in our mind.

Thanks to modern neuroimaging techniques, it has been possible to see how object rotation tasks affect the neuronal level. In the last two decades, using the technique of evoked brain potential, it has been possible to record the brain responses of participants while performing this type of task. It has been observed that in mental rotation tasks the activity of the parietal regions, which are involved in spatial positioning, is increased.

This experiment has been replicated using rotated and inverted letters, hands, numbers and other symbols to see how long it took subjects to respond and how knowing the symbol presented influenced the speed at which it was answered satisfactorily in the trials.

Other research has tried to see if there are relationships between gender, age group, race or even sexual orientation and how efficiently mental imagery tasks are performed.

In the 1990s, we investigated whether there were differences between men and women in this type of task, given that better visuospatial performance has traditionally been associated with the male gender. It was observed that if explicit instructions were given on how to perform the mental rotation, men had better scores than women , although these differences disappeared if no explicit instructions were given, with both genders having the same performance.

With regard to whether there were differences depending on the age group, it was found that young people presented fewer difficulties than older people in carrying out this type of task , provided that there was a time limit. In case there was not this limit, the precision of both age groups did not seem to be very different.

Based on the studies carried out during these years, it is known that the fact of presenting the specular or identical image also influences the time it takes to respond. The time it takes to decide whether the image presented is identical or, on the contrary, the mirror image of the other, is greater when the figure is indeed specular.

This is because, first, the person has to rotate it to put it at the right angle. Then, he has to rotate it in the plane to see whether or not it is a mirror image of the other image presented to him. It is this last step that adds time, as long as the images are not the same.

Reviews of Shepard and Metzler

After conducting their famous experiment, these two researchers received some criticism regarding the results of their experiment .

Firstly, some authors of the time stated that it was not necessarily necessary to resort to mental images to carry out this type of task. It can be said that in that decade there was some opposition to the idea that mental images could be used, and quite a lot of attention was given to the idea that thought was, almost without exception, a product of language.

Despite this type of criticism, it should be noted that in the original experiment the subjects were not told to imagine the figure explicitly, they simply resorted to this strategy on their own.

Other authors stated that the fact that it took longer to answer to figures with a higher degree of rotation was not necessarily due to that fact, simply that more saccadic movements were made to ensure that they answered correctly .