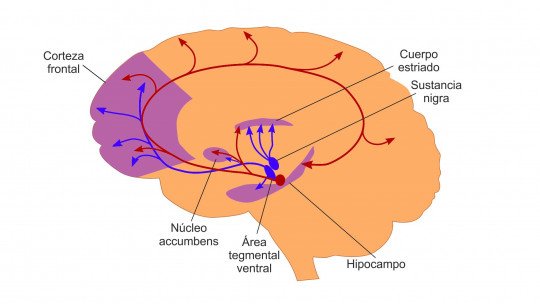 The human nervous system is composed of millions of neurons, which connect to each other forming complex neural networks.

The different networks are usually responsible for transmitting different information, allowing the operation of various systems with distinctive functions. One of the most important routes for our survival is the mesolimbic route , which we will analyze in this article.

The mesolimbic pathway: one of the main dopaminergic pathways

The mesolimbic pathway is understood to be one of the main dopaminergic circuits in the brain , which connects the midbrain with the limbic system going from the ventral tegmental area to the nucleus accumbens, connecting with other structures such as the amygdala and even the prefrontal cortex.

The mesolimbic pathway has been identified with the brain reward mechanism , including most of the structures that are part of it. Thus, it is a circuit of great importance for the development and functioning of the human being, being fundamental in the capture and experimentation of sensations of pleasure and gratification.

This allows us to get closer to stimulation, allowing for example that we want to eat or maintain relationships because of the experience of satisfaction. In the same way, the correct functioning of this path allows us to learn by reinforcing our behavior, seeking to repeat the same actions in those stimulating situations similar to those that caused the activation of the sensations of gratification. In this way, it allows us to learn and condition our behavior to a great extent. It also has an important participation in aspects such as the management of emotions and the physiological reactions that derive from them, behavioral control, impulsivity and motivation.

The mesolimbic pathway is not a structure in itself, but a set of structures that work together to form a network through which information circulates.

There are numerous cortical and subcortical structures that form part of this pathway, the following being some of the most noteworthy.

Part of the basal ganglia, the nucleus accumbens is one of the most important structures of the brain reward circuit and the mesolimbic pathway. This nucleus largely controls the release of dopamine in the brain. It is in this area where most drugs act, as well as one of the most linked to the processes of habituation and acquisition of addictions. It participates in the integration of emotion and motivation to transform them into actions, besides contributing in the management of aggressiveness, memory and behavior planning (through its connection with the prefrontal).

The amygdalin complex is an important part of the mesolimbic pathway, linking emotion with the physiological and behavioural responses characteristic of its experimentation. It is the main nucleus in charge of emotional management, especially in the case of fear (which partly explains the sensations of fear generated by hallucinations in subjects with schizophrenia) and aggression. It also influences sexuality and the feeling of satiation.

The hippocampus is one of the regions of the limbic system that is most associated with memory and learning, allowing the formation and recovery of memories and associating them with the emotional assessment that is made of the experience.

Part of the limbic system, this core groups the set of fibers that connect the thalamus and the amygdala. It is linked to stress management and sexuality (there are differences between sexes and sexual identities in this area).

The prefrontal cortex is one of the areas that govern the cognitive aspects of behaviour , allowing the use of skills such as planning and inhibition of impulses. The mesolimbic pathway also connects with this part of the cerebral cortex.

A malfunctioning of the mesolimbic pathway, either due to its hyperfunctioning or to its hypofunctioning , has frequently been linked to the experience of different mental disorders and behavioural alterations. Specifically, some of the disorders to which this pathway has been most linked are the following.

1. Schizophrenia and other psychotic disorders

The main disorder with which it is associated, in schizophrenia it has been observed that the presence of an overactivation of the mesolimbic pathway due to an excess of dopamine is linked to the appearance of hallucinations and other positive symptoms, such as restlessness, impulsiveness and chaotic and disorganized behavior.

But not only in schizophrenia, this pathway has also been found to be linked to the symptoms of other psychotic disorders such as chronic delusional disorder, schizophreniform disorder or acute psychotic disorder, among others. In fact, the mesolimbic pathway is the main objective to which most neuroleptics aim, and it is essential to work with it in order to solve problems of a psychotic nature.

As indicated above, the mesolimbic pathway is also part of the brain’s reward circuit, and is thus associated with experiencing feelings of pleasure. In this sense, it is important to explain the addictive process of drug addicts, which is due to the facilitation and agonism of dopamine that a large number of substances tend to generate.

In abstinence, the level of dopamine produced by the brain naturally, unlike in schizophrenia , is insufficient to maintain a normative functioning, which causes symptoms such as discomfort and generates craving.

As a fundamental part of the brain’s reward circuit, the mesolimbic pathway also participates in the feeding process and is linked to the sensations of pleasure we feel when we eat. The activation of this pathway is strongly linked to the presence of eating disorders that involve a loss of impulse control, as occurs with binge eating in cases of bulimia and binge eating disorder.

Although obesity is not in itself a mental disorder, the excessive intake of food in spite of having been satiated or as a response to the perception of anxiety and stress is also largely due to the pleasure obtained thanks to the activation of this pathway.

The dysfunction of the mesolimbic pathway has also been linked to the presence of problems related to aggressiveness and impulse control. In general, it is also linked to compulsive behaviour, and this pathway may be affected by other disorders such as OCD or paraphilias.