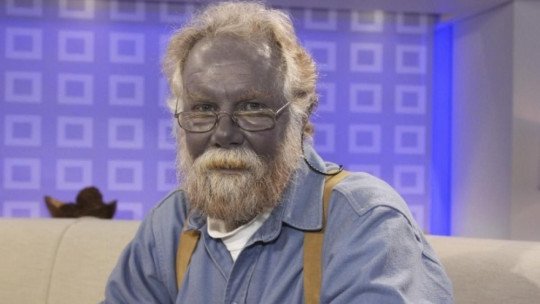 Our skin is an often undervalued and unrecognized organ , which protects our body against a large number of harmful elements such as bacteria, fungi and solar radiation.

This important part of our organism, however, in addition to protecting us sometimes also warns us of the presence of alterations in other areas of our body that can have serious implications for our health. This is what happens, for example, in jaundice, in which the skin acquires yellowish tones.

Another disorder in which an anomalous staining of the skin appears is methaemoglobinaemia, an alteration of blood origin in which the skin turns a blueish colour and which, depending on its type, can have fatal consequences.

Methemoglobinemia: what it is, and symptoms

Methemoglobinemia is a rare blood disorder characterized by an excessive level of a subtype of hemoglobin called methemoglobin. This particular type of hemoglobin does not have the ability to carry oxygen , and at the same time interferes with the hemoglobin that is able to do so in such a way that the latter cannot release it into the various organs and tissues normally. This reduces the oxygenation of the organism.

One of the most obvious and easily visible symptoms of this disorder is cyanosis, or blue skin coloring (although the tones may vary, it is usually a deep blue color). This probably derives from the aforementioned decrease in oxygenation of the organism . And not only the skin: the blood also changes color losing its characteristic red to become brownish.

However, skin coloration is not the only problem that can arise: if the excess methemoglobin is too great, the lack of oxygen in the rest of the body can lead to organ problems and even death. It is not uncommon for respiratory problems to appear as well, and this is usually one of the main causes of hospitalization.

Typologies according to their causes

The causes of the appearance of this disorder can be multiple, and can appear both congenitally and acquired.

Acquired methaemoglobinaemia is the most frequent and usually appears derived from the consumption or exposure to oxidising drugs or chemical substances such as bismuth nitrate, as well as elements used for the treatment of some ailments such as nitroglycerine or some antibiotics.

As regards congenital methaemoglobinaemia, it is generally due to genetic transmission or the appearance of certain mutations. We can find two basic types.

The first of these is generated by the genetic inheritance of both parents, both of whom are carriers (although most of them have not expressed the disorder) of a mutation of certain genes that cause a problem in the enzyme citrochrome b5 reductase . This enzyme does not act properly in the body, resulting in an oxidation of haemoglobin.

The other option within congenital methaemoglobinemias is the so-called haemoglobin M disease, in which this alteration appears because the haemoglobin is structurally altered at its base. In these cases we are dealing with an autosomal dominant disorder in which it is enough for one of the parents to carry the gene and transmit it to generate the alteration (something similar to what happens in Huntington’s Chorea).

Treatment of this condition

Although it may seem hard to believe, methemoglobinemia is a medical condition with curative treatment in some cases.

In most cases the prognosis is positive and the patient can make a full recovery. Treatment mainly involves generating a reduction in methaemoglobin levels and an increase in haemoglobin with oxygen-carrying capacity, by injecting methylene blue (except in those patients at risk of G6PD deficiency, where it can be dangerous) or other substances with similar effect.

If this does not work, hyperbaric chamber treatment can be used. Vitamin C consumption may also be helpful, although its effect is less.

In the case of acquired methaemoglobinaemia, the removal of the substance that has generated the alteration is also required. Milder cases may not require more than this, but people with respiratory or cardiac problems do require the treatment described above.

The changes with these treatments can be spectacular , changing the color of the skin at great speed.

However, in the case of congenital methemoglobinemia type 2 the disease is much more complicated and its prognosis much more severe, with the death of the child being common during the first years.