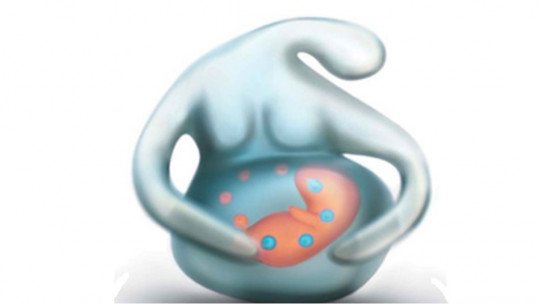 Most of us know that during pregnancy, the mother passes on different substances such as food and oxygen to the fetus. They allow the latter to nourish itself and survive. In this transmission the fetus receives cells from the mother, which participate in its survival, growth and maturation. But since the late nineties it has been detected that the transmission of genetic information is not unidirectional, but it is possible to find that the baby’s cells also pass and interact with the mother’s cells in the mother’s body. In other words, something called microchimerism occurs.

Microchimerism: cells in a foreign body

The concept of microchimerism refers to the situation in which a person or creature has in its organism cells from other individuals , having inside it a small percentage of DNA different from its own. These cells establish a relationship with the subject’s own genetic cells, and it is possible to create a link between both types of cells, which gives rise to both positive and negative consequences.

Microchimerism occurs in both humans and other animal species , such as rodents or dogs. It is a mechanism that has probably existed for millions of years, although it was discovered at the end of the last century.

Although the first signs of this phenomenon were discovered through animal transplants, the microchimerism that most often occurs in nature between two multicellular organisms is that which occurs during pregnancy .

During the gestation mother and child are connected by the umbilical cord and the placenta, and through this connection they exchange some cells that pass to the body of the other and are integrated into it. It is suspected that it has a higher incidence than thought and even some experts consider that it occurs in all pregnancies. Specifically, it has been found that from the fourth week of gestation onwards fetal cells can be found in the maternal organism , and in general it is considered that from the seventh week onwards it can be identified in all pregnancies.

This relationship between mother and child cells is not temporary and is lost after a few months or years after birth: the presence of the child’s cells in the mother’s body has been observed for more than twenty years after delivery. These cells are found in the heart, liver and even the brain and interact with the subject’s own cells.

The cells from the other organism become integrated into one’s own structures and tissues , including the nervous system. Different experts have wondered about the effect that these cells can have on behaviour, and it is possible that it is also associated with the emergence of affection between mother and child. It could be speculated that the fact that part of one’s own DNA is in the other may imply a higher rate of protection at the behavioural level, generating a greater level of bonding and the perception of greater similarity.

It is relevant that it is not even necessary for the pregnancy to be successful for such an exchange of cells to take place: even in women who have lost the baby cells with a different DNA have been found, which seems to correspond to that of the baby.

Studies so far have generally been conducted on mothers who have given birth to male children. Not that microchimerism does not occur between mother and daughter, but it is much easier to locate cells with a Y sex chromosome in a female body rather than trying to differentiate two XX cells.

Effects on the mother

It may be logical to think that in the interaction that takes place between mother and child, it will be the mother’s cells that will bring beneficial effects to the baby, as the mother’s body is already formed and the baby’s body is in the process of formation. But the truth is that the transmission of cells from the baby to its mother also can have great effects on its health .

It has been shown, for example, that fetal cells often help to heal wounds and internal injuries, as well as play a role in reducing symptoms of disorders such as pain in osteoarthritis both at the time of pregnancy and in the long term. It also improves the immune system and facilitates the development of future pregnancies.

It has also been proposed that the presence of these cells may help to explain why women have a greater resistance capacity and a longer life expectancy, noting that many women who had given birth and possessed such microchimeric cells usually have a better life expectancy (possibly because of an improved autoimmune system, although this is mere speculation at the moment). It has also been detected that it reduces the probability of cancer and that they tend to participate in the regeneration of tissues , observing their involvement in the recovery from heart or liver diseases.

However, microchimerism can also have a negative impact. It has been observed that some women’s immune systems react to these cells as if they were invaders, linking them to the emergence of some autoimmune diseases. These are more common in the mother than in the fetus. They could also be linked to some types of cancer , despite the fact that their existence itself is a protective factor against this type of disease.

Effects on the baby

The transmission of stem cells makes the body of the future baby very important. Interestingly, this is the microchimerism that has received the least attention, focusing more on the effects this transmission has on the mother. A probable explanation for this is the difficulty of establishing differences between what the subject’s own organism and cells achieve per se and the concrete influence of the mother’s cells.

It has been detected that the presence of maternal cells in the son or daughter’s body helps, for example, children with diabetes to fight their condition. On the other hand, such transmission has also been linked to the emergence of diseases such as severe immunodeficiency, neonatal lupus syndrome, dermatomyositis and biliary atresia.

As we have indicated, microchimerism occurs naturally during pregnancy, and this is the main form of existing microchimerism, but in addition to this process, it is possible to find this phenomenon in other types of situations , and we can speak of an acquired microchimerism .

We are talking about organ and tissue transplants or blood transfusions, in which a part or a product from one organism is inserted into another. The donated organ or blood contains the DNA of the donor, which enters and interacts with the body of the subject who receives it . In this case the relationship is not symbiotic between individuals, since it is the person who receives the donation who receives the advantages and disadvantages of this phenomenon.

However, this type of microchimerism has its risks, since the body can recognize the foreign DNA as something external that is invading it and react by attacking, which would lead to the rejection of the organ, tissue or blood. This is why it is important to consider the type of blood and the compatibility between donor and recipient, as well as the use of medication that will allow such rejection not to occur.

This should be done by administering drugs that reduce the role of the allorreactive T cells (i.e., lymphocytes that react to the presence of DNA other than your own), so that tolerance to the graft is facilitated. A common way to do this is to inhibit the replication of these lymphocytes.