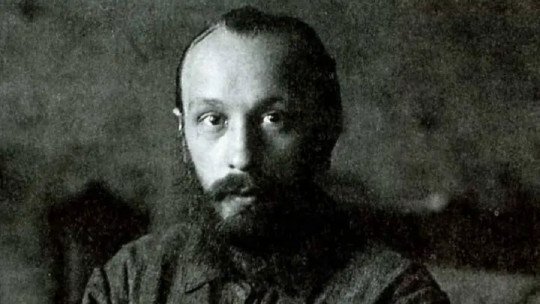 The name of Mikhail Bakhtin is not very well known . In fact, he himself did not wish to become a famous person and was always surrounded by an aura of mystery and anonymity, either out of his own will and desire or because the political situation in his native Russia did not allow him to do so.

In spite of this, the truth is that in his time he became a great referent and even created a group of intellectuals and artists who revolved around Bakhtin. Moreover, after the fall of the Soviet Union, his work became better known and he managed to become popular in the first world

Of course, the figure of this philosopher of language, theorist and literary critic is of great interest today, especially his theory of dialogue. In this article we see a biography of Mikhail Bakhtin , with his life and his contributions to the study of language and literature.

Mikhail Mikhailovich Bakhtin (also written Bakhtin or Bakhtine) was born on November 17, 1895 in Oryol, formerly the Russian Empire. He was a member of a declining aristocratic family. Due to the profession of his father, who was a bank manager, Bakhtin moved several times during his childhood, living in cities like Vilnius and Odessa.

At the age of 9, he began to show the symptoms of osteomyelitis that would accompany him throughout his life and which would cost him the amputation of a leg several decades later. This first experience with suffering, especially with the fact that his body was severely affected, marked him for life and influenced his work.

After the Russian Revolution, Bakhtin had the opportunity to make contact with great figures of the culture of the time. He met with scholars, philosophers, thinkers and artists of various arts who, over time, would form what would be called “Bakhtin’s circle”.

This circle, as its name indicates, was centered on the thought and work of Mikhail Bakhtin and united its members with an interest in German philosophy. This group organized public lectures, evening dialogues and plays.

In the circle the social and cultural problems that Soviet society was suffering from were approached from a philosophical perspective . Although the Russian Revolution promised a great liberation for the proletariat at first, with the passage of time the new regime degenerated into the dictatorship of Stalin.

The work of Bakhtin and those around him focused on social life in general, emphasizing how artistic creation was taking place at that time as a form of expression of society’s concerns and worries. Particular importance was taken of how the language reflected the conflicts between the new social classes that had emerged as a result of the change in government.

According to the circle, linguistic production is, or at least should be, dialogical insofar as it is a social interaction. That is, just as in a normal conversation between two people, who speak and listen to each other, the powers that be and the people should engage in dialogical communication.

Traditionally, the most powerful classes, either in the economic or in the political aspect, try to impose a single discourse , trying to define it as the exemplary, which also implies trying to impose a single vision. On the other hand, the less favoured classes only receive a message given in the form of a monologue, of an imperative. In other words, they have no say in how the government should be run or, in the most serious cases, they risk being “silenced”.

During the regime of Joseph Stalin, several maneuvers were carried out to eliminate any criticism of the government of the already well-established Soviet Union. The Bakhtin circle was the victim of this persecution, and several of its members were executed. Mikhail Bakhtin himself suffered in the flesh from these interventions, but for his “fortune” he was simply exiled to Kazakhstan.

Despite his prolific literary activity and his great knowledge, the fact that he was persecuted by the Stalinist government caused him to lose face when he returned to public life in the 1940s.

During those years he worked on a thesis focused on laughter, which later became one of his most important works, Rebelais y su mundo . This work is one of Bakhtin’s great contributions towards a more parodistic type of literature.

Despite the bad reputation he had acquired for being critical of the regime, he gradually regained his prestige and years of intense literary production followed, living in Moscow during the 1940s.

After living in Moscow, Mikhail Bakhtin moved to Saransk, another Russian city where he had the opportunity to work as a teacher in a specialized institute of pedagogy in the region. From 1957 to 1961 he worked as head of the department of Russian and world literature , until his health problems forced him to retire.

Bakhtin’s work is embedded in Russian formalism. During the 1920s his work focused mainly on ethics and aesthetics.

Among the great works of this Russian theorist, four works are of crucial importance for understanding the complex theory of Bakhtin:

1. Towards a philosophy of the act

Although this essay has not been able to be fully recovered, it seems that in it Bakhtin explained his particular way of understanding how human beings understand the world around them and interpret it.

This work suggests what would later be characteristic in the ethical and moral vision of this Russian author . It defends the idea that explains the understanding of each human being as a unique being.

According to what has been recovered from the work, it explains how people understand that we act both actively and passively in our own existence, whether physical or emotional.

It also stipulates that our perception of uniqueness exists only to the extent that we think about it and that, since we are irreplaceable beings, we must update this idea that we are unique.

These premises are complex and, as his literary career evolved, he became more specific about what all this meant.

In this work he explains that, on an individual level, people are not completely definable on the outside . According to the idea behind this explanation, it is not possible to describe a person in a true way if you are not that person, since you cannot feel aspects such as their emotionality.

According to Bakhtin, Dostoyevsky, in his works, tried to portray the characters of his works against the way many writers did, avoiding treating them as if they were objects that could be approached from different perspectives.

Moreover, it is thanks to Dostoyevsky’s work that Bakhtin proposes the concepts of polyphony and dialogue .

Polyphony, referred to in the literary field, is the fact of exposing several characters of a novel and having them explain their inner world, without the need to resort to the narrator or the main character if there is one.

3. Rabelais and His World

It is a work in which he analyzes the social system of the Renaissance focusing on language. Its objective was to see what was the balance between the language that was allowed at that time and the one that was not.

This work, which is posthumous, is a collection of essays by Bakhtin in which he deals with themes related to language . It introduces and details concepts such as heteroglossia, dialogue and chronotope.

The term dialogic, especially related to Bakhtin’s dialogue and which has become the most remarkable idea of his long professional career, is somewhat complex to explain. It refers to the fact that the information handled by two people who are having a conversation is not something static.

People, in their communicative interactions, modify together with the meanings of the words they use , either because the receiver wants to give it a concrete meaning or the receiver misunderstands it. Also, the words can be used in an alternative way to the meaning that has been socially assumed.

Heteroglossia refers to the fact that different records exist between people. This is especially applicable to novels, in which the register of the characters and that of the narrator do not necessarily coincide in aspects of the use of colloquialisms, solemnity, the use of the first and third person…

Finally, chronotope is how space and time references are made in language and discourse. That is, what are the terms and expressions used to describe and indicate places and times, whether in the novel or in an article about a real event.