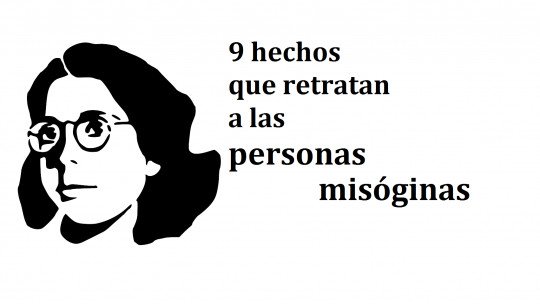 Misogyny is a concept that serves to refer to the more or less disguised hatred towards women and girls .

It should be kept in mind that misogyny is only an idea that describes real behaviors of real people, and therefore only exists through the acts of certain people.

Characteristics and attitudes of misogynist people

Recognizing misogynist persons is necessary to relativize their behavior and to educate respect for all persons, regardless of their physical characteristics.

Below you can see what are the main characteristics, attitudes and propensities of misogynist individuals . 1. Reification of the woman’s body

Perceiving women as objects is one of the main characteristics of misogynist people . The reification makes that, on the one hand, women are considered as objects used to obtain pleasure and to raise children, and on the other hand, it reduces their value as human beings, making that in the eyes of misogynist people, women are only valuable because of their “functions” and not because of their human condition.

It should be noted that objectifying is not recognizing a person’s physical attractiveness, but reducing his or her entire identity to aesthetic or functional properties, as one would do with any tool in the home.

Another characteristic of misogynist people is their tendency to selectively use a morality similar to the puritanical one regarding sexuality ; specifically, they apply it only when judging women’s behaviour. That is why they denigrate women who dress or act in a way that they consider provocative, while ignoring this phenomenon in the case of men.

The logic behind this type of thinking is simple: since the value of women is basically related to aesthetics and their ability to give offspring, anything that can be interpreted as a tendency to “share” these two qualities with someone other than the couple dilutes the value of the one who does. The man, however, has value beyond his appearance and his reproductive role, so it is okay if he expresses his sexuality in a more or less visible way.

Tendency to encourage others to reify

Misogyny is not something you get used to living in isolation, but rather is linked to a way of seeing things that you try to share with others . This makes it common, for example, for misogynist people to encourage others to make derogatory or unpleasant comments about strangers passing by.

4. Use of male violence

The use of male violence, whether physical, verbal or symbolic, is the most obvious manifestation of misogyny. This type of violence is systematically directed against women because it is such, and is one of the main reasons why feminism claims the need to guarantee women’s rights.

Misogynist people tend to seek responsibility for male violence from victims. They understand that these episodes of aggression are either because the woman is not careful enough or provokes others with her way of dressing, or simply because it is assumed that the accusations of violence are false without having consistent evidence to suggest that possibility.

In this way, a double objective is achieved. On the one hand, it hides violence against women , and on the other hand, it legitimizes the power over women’s bodies by defending the idea that they must adapt to very defined gender roles.

It is not surprising that misogynists tend to reject the idea of relating to women beyond the professional sphere or economic transactions. Today there is even a movement called Men Go Their Own Way which claims a lifestyle away from women and traditional marriage .

Whenever there is the possibility of imposing one’s will on a woman, misogynist people do it . This does not mean that they use force; they can simply make capricious or absurd requests for the simple pleasure of seeing how she obeys. Somehow, contexts where men have power over women (such as at work) are exploited to use it far beyond what is justifiable. Similarly, it acts as if there is a tacit agreement that women obey, even in informal contexts where there is no superior or inferior position.

Under the influence of misogyny, feminine leadership, or anything that implies giving visibility to women beyond their traditional roles, is seen with bad eyes . This can be expressed both in the business and organizational environment and, for example, in the criticism of fictional works. Last year, for example, there was some controversy when part of the Internet community called for a boycott of the film Mad Max: Fury Road for giving the lead and the role of hero to a character played by Charlize Theron.

In this way, a traditional view of things is defended in which the most relevant decisions are always taken by men, and attempts to change this are seen as strident attempts to draw attention to themselves.

9. Tendency to relate lower forms of culture to the feminine