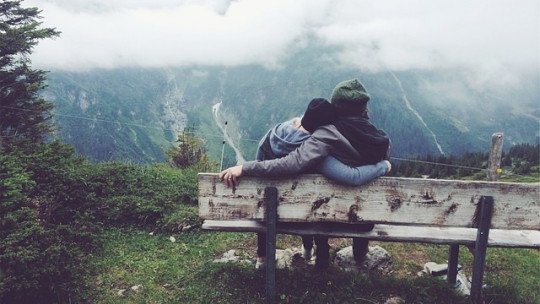 The formation of mixed couples , that is, those in which there are significant cultural differences between its members (such as country, religious beliefs, language or ethnicity), has increased considerably in recent times.

This growth is primarily attributed to the increased possibilities of meeting people from other countries due to the intensification of international mobility and the massification of communication through the Internet. In addition to the above, a series of social transformations have been taking place in the area of love that allow people greater freedom and autonomy in making their marital choices.

Migration in which one of the main motivations is to form a couple or a family is called by some social researchers as migration for love .

This migratory typology is described as a diverse and complex phenomenon that transcends the simplifications and prejudices with which it is usually conceived from common sense.

Different ethnographic researches highlight that women express much more frequently than men their feelings and the desire to initiate or establish a couple relationship has been one of the main reasons for a geographical displacement . This is attributed to the fact that structural conditions still exist for the man to function as a provider in a family and for the woman to prioritize the care of children and the home, leaving her professional development in the background.

It is therefore more common for a woman to leave her country and migrate to her partner’s country or to accompany her partner in a labour migration.

Migration for love is then described as predominantly female and is mainly directed from regions of the Caribbean, Latin America , Eastern Europe and Southeast Asia to wealthy countries in Western Europe, North America and the Asia-Pacific area. The ease of mobility for European citizens within the EU has also led to a significant increase in the formation of intra-European binational couples.

Modes of mixed couples and their motives

The differences between people from different cultural backgrounds can be smoothed out or intensified if they share or differ in other characteristics such as: urban or rural lifestyle, educational level, professional environment, social class, etc. Sometimes, despite the fact that people come from different countries, they share many other factors resulting in more elements of affinity than distinction .

For anthropology it is a fact that in all cultures people tend to bond with members of their own group and that bonding with others is an exception. The choice of a partner who belongs to another culture can be interpreted as a transgression of one’s own culture and family ideals, since a foreigner will transmit values different from one’s own.

In binational mixed couples, the borders of the countries are transcended , but the most usual is that the borders of socioeconomic class and educational level are still maintained. It is also possible to observe the existence of a kind of hierarchy of cultural distances, in which certain nationalities or groups of migrants are considered more or less susceptible to being chosen as partners. In this hierarchy would be located the nationalities that would be considered totally incompatible to those that are admired in their practices and customs.

The exchange of status Although in smaller proportions, sometimes in mixed couples socio-economic or educational level boundaries are also transcended . In these cases, an exchange of status may occur. This is the case of people from rich countries (high status) with a low level of education (low status) who marry people from poor countries or belonging to marginalized minorities (low status), who have a high level of education.

The exchange can be for any element that can be considered as a guarantee of status in a person: beauty, age, social category, a nationality that has a certain prestige, etc.

Sociology highlights that statistically men tend to marry more frequently in a hypogamous way than women . That is, with a couple with a lower socioeconomic level. And, therefore, women tend to marry more frequently in a hypergamic way, that is, with a man who has a higher socioeconomic level. This is also true for mixed couples, although the educational level reached by women in recent decades is making the statistical difference less and less wide.

It has also been observed that as the level of education increases, so does the likelihood of partnering with people from different countries. Increased inbreeding (i.e. the tendency to bond maritally with people from the same culture) occurs more intensely in people with strong religious observance.

The mixed couple as resistance to transformations in gender relations

It is relevant that, according to different investigations, the motivations that have to do with gender are expressed by men and women who decide to establish a couple relationship with a foreign person.

Gender-related motivations are much more evident in the case of men from rich countries who are looking for a partner abroad, as well as in women from those countries where these men focus their search. In relation to the above, it is stated that the material and sentimental independence acquired by women in the most industrialized countries has generated resistance from some men with respect to this new female model.

This resistance leads them to seek a partner in a marriage market different from that of their own country, opting for nationalities in which women are assumed to maintain a more traditional role. That is to say, that they maintain as a priority the family and the home over their profession , and that they would accept gender relations based on a certain degree of submission and dependence. Such a stereotype is granted, for example, to women from Latin American or Eastern European countries.

The search for a more traditional woman is more pressing in men over 40 years, in the younger the prototype of the submissive woman and housewife is less desirable, influencing more other factors as motivators to establish a relationship with a foreigner.

Some men justify their desire to seek relationships with more traditional women by the conflicts and tensions they feel generated by the independence gained by women in their previous relationships.

Nostalgia for more polarized gender roles is also present in some women in industrialized countries who say that part of their interest in a foreign partner is the desire to relate to men whose way of being is closer to a certain stereotype of traditional masculinity: chivalrous, romantic, passionate, seductive.This type of stereotype is granted for example to men from Mediterranean or Latin countries. The polarization of the genders in these cases is seen as a value of complementarity and also as part of the sexual stimulus.

Marriage to a foreigner as a quest for equality

Paradoxically, for many Latin American or Eastern European women one of the main motivations for establishing a relationship with a foreign man is the desire to acquire equality quotas and emancipation that they do not find in their own context. These women describe the gender relations in their countries as more subordinate and inequitable than what they assume to be the case at the destination of their migration.

Men in their own country are described as more macho, controlling, possessive, unfaithful and aggressive. They see these aspects as ingrained in their own culture, and believe that they occur in much less intensity in the men of the destination country. Some of the women also express a desire to distance themselves from previous experiences of abuse and alcoholism by their former partners. In these cases, gender polarization is seen as a manifestation of oppression and inequality .

The physical aspect: the ideal and the exotic

The predominant physical aspect in some nationalities is the object of attributes that nourish the fantasies of men and women , constituting also a factor that influences as a motivator to establish a relationship with a foreigner. This is, in part, the attributions on the sexuality of certain population groups.

The above-mentioned research on international matchmaking agencies operating on the Internet is evidence of this. This is the case, for example, of those specialized in Latin American or Eastern European women that highlight the physical characteristics that are supposed to be valued by possible “boyfriends”. One would be the ideal Nordic type (tall, blonde, blue eyes, slender) or the exotic type referred to Latin American women (brunette, curvaceous and sensual).

Marriage as a way to improve living conditions

The cultural model of couple that predominates in the West is based on the ideal of a relationship established by free love and spontaneous, distanced from any calculation or interest. For this reason, the motivations of a material nature, which are sometimes interwoven with the sentimental ones, are usually much more veiled in the speeches of women who decide to formalize a couple’s relationship with a foreigner.

On many occasions, the countries from which people who migrate for love come are characterized by high rates of job insecurity or other aspects that promote the search for better living conditions. Marriage to a foreigner is one strategy among others to be able to establish oneself in a place that offers better opportunities.

Despite this expectation, people with high levels of education encounter bureaucratic obstacles to their work and are forced to do unskilled work .

One of the situations that many love migrants face is resistance from family and friends of their partners who accuse them directly or indirectly of marrying for economic gain or to legalize their residence in the country. Many of them report that they constantly have to prove that their marriage is based on feelings and that it has not only been instrumental. Some women consider the arrival of the couple’s first child as a milestone of legitimacy .

In this connection, it has been observed that women who migrate for love do not usually seek to establish links with migrants of the same nationality at the destination. Such distancing is sometimes encouraged by their local partners in response to the desire to make a difference to economic migration and the stigmas surrounding it.