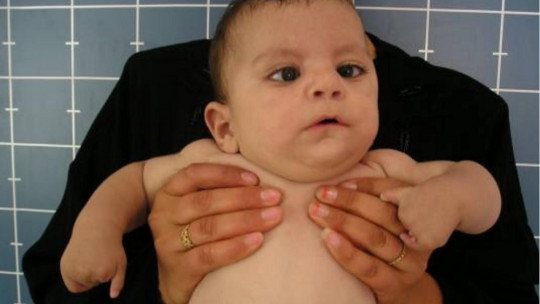 Moebius syndrome, also known as Möbius syndrome , is a rare neurological disorder whose symptoms already appear in newborn babies. It is a condition that affects the movement and control of several muscles in the face and also causes other major problems in other parts of the body.

Below we will see what is known about the causes of Moebius syndrome, what its main symptoms are and what type of treatments are recommended to treat patients with this neurological pathology.

What is Moebius syndrome?

It is known as Moebius syndrome a congenital neurological disease that is considered very rare because of the scarcity of known cases of patients with symptoms that fit the diagnostic criteria.

The main effect of this pathology is the absence or underdevelopment of nerves linked to certain facial muscles, which usually results in total or partial facial paralysis and, in some cases, deformations in various parts of the body.

As we have seen, the main symptoms of this pathology have to do with the deficient control of the muscles of the face , although they are not the only manifestations of the disease. This is a more detailed explanation of the signs of the pathology:

1. Problems when trying to move muscles of the face

The deterioration of the cranial nerves, especially those of the VI and VII, means that the movement of the eyelids cannot be well controlled and the repertoire of facial expressions is limited . The face seems to have remained &quot;frozen&quot;.

Problems in the motor nerves cause many muscles to degrade when not used .

To function well, the eyes need a high degree of coordination in the work of small muscles in the face, so small flaws in these movements are very noticeable in this part of the body. In addition, the deterioration of cranial nerve VI can produce strabismus .

Another typical symptom of Moebius syndrome, which also often causes dysarthria (difficulty in pronunciation and speech in general.

5. Malformations of the feet

Many people with Moebius syndrome place their feet incorrectly when walking , orienting the soles inwards, which ends up generating malformations.

This consequence derives from the difficulties in the movement of the muscles of the face, something that has a great impact on social life by not using normal facial expressions.

Swallowing is difficult because of the tongue movement problems. Choking and coughing are frequent.

By not closing the mouth properly, it dries out and germs proliferate . This, for example, can lead to infections, malformations or cavities and other dental and gum problems.

The malformations of the jaw and the inability to close the mouth properly cause some complications when breathing, especially during sleep.

Causes of this pathology

Moebius syndrome is known to affect especially cranial nerves VI and VII , although it can also damage other cranial pairs coming out of the brain stem. However, the exact biological mechanism that produces this degradation is not known (partly because it is a rare condition).

However, there are some theories as to what might be happening to the health of patients with this neurological disorder.

For example, although the heritability of this syndrome is low, which means that it usually occurs in babies of parents who do not have symptoms or parents who express them, the REV3L and PLXND genes may be involved .

It has also been discussed that Moebius syndrome could be produced by problems during intrauterine development associated with environmental or genetic alterations, such as the cessation of blood supply to the embryo’s brain.

Currently, there is no known method of intervention that guarantees a definitive cure for Moebius syndrome with a good margin of probability. Therefore, the treatments used with patients presenting this pathology are oriented not to cure, but to mitigate the negative impact of the symptoms and to aid in socialization and labor integration.

In this sense, interdisciplinary work is needed among different health professionals, such as neuropsychologists, neurologists, speech therapists, pediatricians and clinical and health psychologists, among others. In psychotherapy, work can be done through cognitive-behavioral therapy to modify limiting beliefs and improve the self-esteem of patients, as well as to train them in social skills, which together with the work of speech therapists will help to break the isolation that these people often suffer.

Surgery can also be used to correct any malformations that may occur, although always trying to correct bad postural habits so that they do not appear any more in the future.