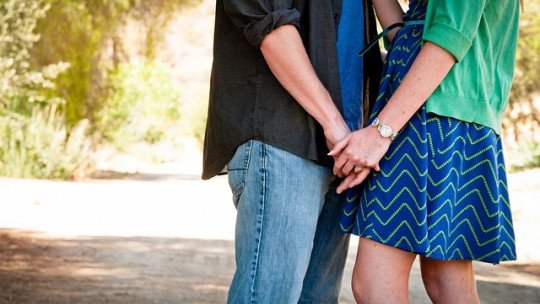 Let’s talk about one of everyone’s favorite topics: infidelity . Traditionally, adultery has been seen as a kind of unnatural error, something like a set of small cracks on the surface of what human behavior should be. Thus, the concept “extramarital relationship” has been associated with a failure on the part of individuals to appease their impulses and form a family.

In general, infidelities have been considered an exception, something that does not represent the human essence. However, one might ask whether this approach is realistic. Have you ever wondered whether there is any mechanism in our brain that guides us towards monogamy ?

The quick answer to this question is: no, there isn’t. In general terms, that we humans are not monogamous in the same way that some animals are is beyond dispute. First of all, we must distinguish between sexual monogamy and social monogamy . Sexual monogamy is something strongly determined by genes, and consists of the practical impossibility of reproducing with more than one partner. This type of “fidelity” is something that is very far away from us and, really, it is doubtful that anyone would have much interest in experiencing this form of monogamy. For example, some species of lantern fish: when they reproduce, the male remains physically attached to the female, which is much larger, and she digests her partner until she is completely absorbed.

Sexual monogamy, then, is a rather rare phenomenon in nature, since almost all species that reproduce sexually and care for their young with a specific partner, copulate with others at the minimum of change and then continue to dedicate themselves to family life with their usual partner. In these cases we speak of social monogamy, that is, a pattern of behavior guided by circumstances and not by genetics.

In our case, it is more or less the same. The most we can say is that we are animals who sometimes practice social monogamy, but not sexual monogamy. This is the only type of monogamy to which we aspire, since we have the option of living fidelity as a pact , something that is reached between two people by their own decision, but does not occur spontaneously in the members of our species (or at least not in a generalized way).

Although they are not well regarded in some cultures, extramarital relationships are relatively frequent in our species compared to other animals: gibbons, albatrosses, seahorses, etc. Therefore, to consider them as an exception would be to deliberately ignore a large part of reality. Moreover, the failure to comply with genetic monogamy is not the exclusive heritage of men, since it frequently occurs in both sexes.

If adultery scandalizes us so much it may be, perhaps, because it is a violation of the rules, not because it has no reason to be. It can be discussed whether infidelities (understood as the break-up of a deal with a partner) are something desirable or not, but it cannot be denied that they are totally grounded in reality: there are even contact agencies that make infidelity an added value in their marketing campaigns.

But then… how and why did married life originate in our evolutionary history? What is the point of a gap between sexual monogamy and social monogamy? Evolutionary psychology has certain hypotheses about this.

In general, when we study the patterns of human reproduction we find a great variability depending on each culture, but we do not see a strong genetic predisposition that leads us to have children with only one person, as we have seen. However, some evolutionary psychologists believe that in previous stages of our evolution as apes there may have been a tendency towards monogamy that natural selection assigned to us because of its usefulness. What was the main usefulness of having a stable partner, according to them?

The chances of having many sons and daughters who survive us. A rather sullen analysis, yes. According to this approach, romantic love, which is associated with a feeling of obligation towards one’s partner, is actually born from a kind of selfishness invisible to our eyes. Social monogamy would be, in short, an agreement based on one’s own interest and on the surrender of a trust that is to some extent undeserved.

It should be noted that in itself, adultery need not be a disadvantage from the point of view of natural selection. For example, it has been seen that women with children from extramarital relationships may be more successful in reproduction in certain contexts; that is, they may be more likely to have offspring. So we cannot even say that infidelity is unhelpful from the point of view of natural selection. But there is another thing we have to take into account if we want to study the fidelity pact: the differences attributable to sex .

A mother knows that all the efforts she can make to conceive and raise offspring will be matched by the perpetuation of her genes. Compared to the male, a female is certain that the sacrifices she can make so that her offspring survive will not be in vain. Males do not have this assurance (in their case there is more reason to doubt whether the offspring they protect are their own or not) but, on the other hand, they do not become more vulnerable during the gestation period. Precisely because of this, according to the logic of natural selection , a male has less value than a female as a reproductive couple, because the latter, in addition to being fertilized, takes care of the offspring for a long time. If half of the population of a species invests much more time and effort in raising offspring, evolutionary psychologists will tell us, the individuals who make up that half of the population will become a resource for which the other half of individuals will compete fiercely. In addition, if the survival of the offspring is compromised by their fragility, it may be in the best interest of the male to always be around to provide resources and offer security. Hence, an emotional state similar to romantic love, relatively long-lasting and involving the exclusivity of a couple, may be useful.

One of the most stark conclusions about the origin of social monogamy focuses on the important role of something similar to jealousy. According to a study published in the journal Science , monogamy tends to appear in mammal populations when the females are far apart from each other and their density over the territory is low, which would make it difficult for the males to monitor all of them and prevent intruders from fertilizing them. So, if this is true, care of the young by the males would be a kind of necessary evil.

Another study, published in PNAS , suggests that monogamy may have emerged to prevent male infanticide. This could have been so because, in many polygamous mammals, it is frequent that with each change of dominant male he kills the offspring of the previous dominant male in order to make the females sexually receptive again. This is all horrible, isn’t it? If you like, you can rethink the monogamous habits of the lantern fish. See if that gets you back on your feet.

You may have noticed that all of the above is painfully reasonable if we think of the human being as an animal that is guided by certain impulses . In the vast majority of vertebrates the young already have the ability to move on their own within a few hours of birth, and some are completely independent. In comparison, our babies are born myopic, unable to coordinate arms and legs and with difficulty even keeping their heads off the ground. They need all the attention they can get, and the help of one body may not be enough.

However, many psychologists and anthropologists believe that it is the cultural dynamics, and not genetics, that explain the assignment of parenting tasks. That’s why we’re so unpredictable, they say. There are many people today who, despite experiencing romantic love and the need to be attached to a person, do not even consider having babies. Other people do not even believe that this form of attachment exists. This may be true because the great brains originated by this “pairing” process would have made possible the emergence of a type of thinking that is abstract enough to diversify the forms of love: love for community, love for friends, etc.

All these links are characterized by the creation of groups of people close to each other who can help raise the children. Although the couple formed by the biological parents is not always the one in charge of raising the youngest, there is almost always a protective social circle around the baby, and it may even be that in certain contexts this modality of raising is more beneficial, as proposed by Skinner in his novel Walden Two . In these situations, love can be seen as the glue that holds together this circle of people dedicated to breeding and that substitutes for each other. In the end, the roles of “protective figures”, like any other role, are interchangeable.

One of the problems of evolutionary psychology is that it provides explanations for human behavior that most people do not like and which, moreover, are insufficient on their own. For this stream of psychology, much of the behaviour is explained as being a result of adaptation to the environment (i.e. ensuring that our genes are passed on to the next generation). For example, we come to see relationships between men and women as a game in which we seek to use the opposite sex to make the perpetuation of our own genes, or of the genes that most resemble ours, more likely. In addition, we have to keep in mind that the object of study of this discipline is something that cannot be experimented with: the evolutionary history of the species.

Somehow, evolutionary psychology provides possible explanations for certain patterns of behavior, but it does not identify and explain them completely. Human beings are characterized by being acculturated, and learning explains much of our psychological aspects.

However, although evolution does not determine our behavior, it can explain certain very general tendencies, and it can also help to formulate experimental hypotheses in the species to which we belong right now: the Homo sapiens .

It is true that the attachment or love we feel towards people who are not our children could also be understood as part of an evolutionary strategy to ensure the transmission of our genes. However, it could also be understood as a phenomenon that escapes explanations based on biology. In spite of this, if we want to descend from such an idealistic conception of love to immerse ourselves in the swamp of crude scientific explanations, we must admit that there is nothing in nature or in our genetics that seems to go against occasional infidelities . It is possible, even, that natural evolution sees these encounters with good eyes.