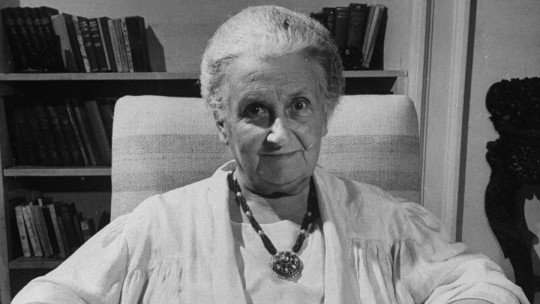 The Montessori educational method, which was developed in the early 20th century for use with children and pre-teens, has become very popular and widespread since its inception.

In this article we will describe the 8 fundamental principles of the Montessori method , among which we can highlight the prepared environment and self-education.

What is the Montessori method?

Maria Montessori (1870-1952) was an Italian doctor and educator whose work, mainly focused on educational philosophy and pedagogy, is an antecedent of constructivism and continues to have a strong influence today.

The educational method proposed by Montessori emphasizes the need to favour the natural development of the students’ aptitudes through self-direction, exploration, discovery, practice, collaboration, play, deep concentration, imagination or communication.

This pedagogical philosophy is a clear departure from traditional educational methods since it is based on spontaneity and on the choice of students rather than on rigid systems and based on the fulfilment of certain criteria of academic evaluation. For Montessori, respect and promotion of the child’s independence is key.

In turn, Montessori’s proposal is considered a theoretical model of human development. In this sense, it is necessary to frame the principles of the following section in the nuclear postulates of his theory: people we construct ourselves psychologically through the interaction with the environment , and we have an innate tendency to personal development.

Although the Montessori method has been applied in different ways because of its popularity, it is possible to find at least 8 fundamental principles of this pedagogical style based on the work of Montessori herself and the most popular later developments.

Montessori’s educational philosophy has a markedly constructivist character. It is understood that people in general learn better through direct contact, practice and discovery than through direct instruction. However, certain subjects, especially from the age of 6 onwards, require occasional master classes.

2. Preparation of the educational environment

The Montessori method uses a “prepared environment”; this means that it is adapted to the needs of the students according to their age. In addition, it should encourage movement and activities, be clean and orderly, aesthetically attractive and have natural elements such as plants inside and outside the classroom .

3. Use of specific materials

One of the most important components of the prepared Montessori environment is the inclusion of certain materials that were developed by Montessori herself and her collaborators. It is preferable to use natural materials, such as wood, than more artificial ones.

Despite the fact that the prepared environment entails limitations in the range of activities that students can access, it is still greater than that of traditional education and during most of the class time there is freedom to choose any material, game or educational content from those available in the classroom.

Montessori spoke of “self-education” to refer to the active participation of students in their own learning. In this sense the role of the teachers is more related to preparation, supervision and help, as we will see later on.

A very relevant aspect of the Montessori method is the fact that it is recommended that the classrooms contain a high number of students and that these are of different ages, although they are divided by age groups because of the specificities of development in each period. Generally the separation is done in groups of 3 years (e.g. 6 to 9).

This is because Montessori advocated that there are sensitive periods when children have an easier time acquiring one or another type of skill and knowledge. Thus, in early childhood it is important to develop language or the senses, while abstract thinking is encouraged especially from the age of 6.

Since students are free to choose how they are educated, they will often choose to collaborate with their peers. This allows peer tutoring , is especially relevant in relation to play (which plays important roles in sociocultural development) and should be promoted by the teaching staff.

Another of the most characteristic features of the Montessori method is the presence of uninterrupted 3-hour classes. Since they are mainly based on self-direction by the students, they should be much less bored than in traditional teaching; the aim is to favour the achievement of a state of concentration that enhances learning.

8. Teacher as guide and supervisor

In the Montessori method the teacher guides the students’ learning process by avoiding to hinder their self-education process . Thus, their roles are related to preparing the academic environment, observing the children to promote individualized learning, introducing new educational materials or providing information.