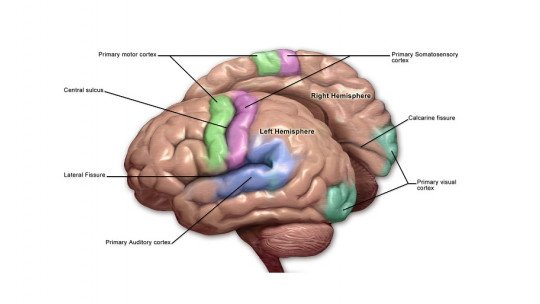 Say hello. Smile. Kiss. Run. Eat. All these actions have at least one aspect in common: they require some kind of movement by the subject to be carried out. The ability to move is something fundamental for survival , as it allows us to react to stimuli and actually execute any kind of behaviour, including those necessary to allow our survival. But movement does not just happen, it requires some planning, coordination and precision.

At the level of the brain, this control is mainly carried out by the motor cortex of the brain , although it is also influenced and mediated by other brain structures. Throughout this article we can see what the motor area is, where it is located and what parts it is made up of, as well as some of the main problems that are generated when it is injured.

Motor cortex of the brain: location and function

The motor or motor area of the brain is called the part of the cerebral cortex whose main functions are to allow the generation, maintenance and completion of voluntary and conscious movements by the subject.

This brain region is located in the upper rostral part of the brain, at the back of the frontal lobe, just before the central or Rolando’s cleft and the somatosensory area. It is in this area where the Penfield motor homunculus is represented, a representation which indicates the parts of the cortex centred on the movement of certain muscles among which some particularly innervated ones such as the hands, the tongue or the face stand out.

Main regions of the motor area of the brain

Within the motor cortex we can find different regions, all of them of great importance when it comes to managing movement. Among them the main ones are the following.

The main structure in charge of movement is the area that will generate and send the order of movement to all the voluntary muscles of the organism. It is the part of the brain that sends the order to the muscles to contract or tense , generating the movement.

This area has an important role in programming and planning the movements and sequences to follow in order to be able to carry out the movements in a precise and coordinated manner. In spite of this, and the fact that the electrical stimulation of these areas can produce movement, it is not in itself the one dedicated to carrying them out, but it focuses on organizing the movement before the primary motor can carry it out.

In order to carry out a movement, it will be necessary first to act on these areas, and then to pass the information to the primary motor area and once there, send the movement order. They are very connected to the association areas. Within the secondary motor area we can find two regions of great relevance.

Located in the motor cortex, in front of the primary motor cortex and near the Silvio’s cleft , is the area or premotor cortex. This area is especially linked to the programming and guidance of movement, storing motor programs learned through experience. This also includes the movement necessary for speech. It usually acts on those motor responses guided by an exogenous stimulus.

Part of the secondary motor cortex, the supplementary motor area is associated with the planning, scheduling and coordination of complex movements, as well as the initiation of movement. It also participates in aspects such as the adoption of postures and also has an influence on uncoordinated movements.

In different classifications, Broca’s area is included within the motor areas of the brain, since allows the production of language and the muscular movement necessary for it. It is situated at the edge of the supplementary motor area.

In some classifications this area appears as one of the motor areas, because it transforms visual and other sense information into motor instructions .

As indicated above, the motor cortex is a brain region of great importance when it comes to carrying out virtually any action. That is why an injury in these brain areas can have severe repercussions in the life of patients.

One of the problems that can generate the injury or destruction of the cortex or motor area is paralysis and loss of mobility, either in a specific part of the body, in a hemicorpe or in the whole body. Hemiplegia or quadriplegia may occur. If the lesion is only in one hemisphere, the paralysis will occur contralaterally: in other words, if the right motor cortex is injured, the left hand will be paralysed.

With regard to the secondary motor areas, the effects of an injury on them often alter the ability to perform movements in a coordinated and sequential manner. We are talking about the emergence of possible apraxia, or aphasia or dysarthria when we refer to problems in the production of the movements necessary to communicate. Agraphia can also be produced by not being able to carry out the necessary movements to write correctly, problems in eating or even visual problems when the movement of the facial organs and muscles is not correctly controlled.