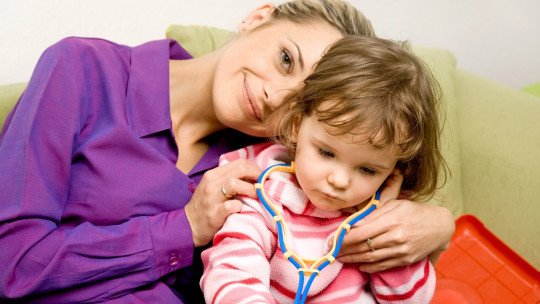 Unfortunately, many children are abused every day in our society. There are several forms of child abuse and multiple classifications. In general terms, we can specify the following types of abuse: physical, psychological, sexual and negligence.

In 2002, an epidemiological study was carried out in Spain which confirmed the existence of 11,148 child victims of abuse in the family setting. 86.37% of these minors suffered negligence, 35.38% psychological abuse, 19.91% physical abuse and 3.55% sexual abuse .

However, as in almost any epidemiological study, there are “submerged” data and only the tip of the iceberg is visible. In this article we are going to talk about a form of child abuse that is very difficult to diagnose, we could even call it “hidden child abuse”: the Munchausen Syndrome by Proxy .

What is Munchausen Syndrome by Proxy?

Munchausen’s Syndrome by Proxy (MPS), or according to the DSM-5 Factitious Disorder applied to another, is a particular form of high-risk child abuse that is difficult to diagnose, as it often goes unnoticed for a long time, even years. This is a syndrome that has seen its incidence increase due to greater knowledge of it and professional awareness.

Following DSM-5, it is a disorder characterized by falsification of physical or psychological signs or symptoms, or induction of injury or illness, in another, associated with deception. It is a mental disorder that typically is seen in adults who are in the care of other dependents to them (usually defenseless, which has its logic). Victims of this disorder are often minors, and it is considered a form of child abuse.

The child’s parents (generally, according to epidemiological studies on the subject, the mother) simulate the existence of illnesses or cause symptoms in the child with the aim of receiving medical assistance, some of which are of high risk and cost. It seems that one of the objectives of the parent is to misrepresent their child to others as a sick, vulnerable, dysfunctional and/or troubled person.

Experts in the study of this disorder claim that the parent continues to cheat even without receiving any visible benefit or reward in return . The most serious consequences of this syndrome are serious physical and psychological complications for the child and ultimately his or her death.

The symptoms or signs are usually inconsistent, often unexplained, and resistant to any treatment , as they are deliberately and recurrently executed by the parent. Some examples are:

As we have commented previously, the diagnosis of this syndrome is a challenge for the clinician : it is difficult to detect it when the mother tends to go to different hospitals, since for health professionals the facts observed will be isolated. Despite the fact that paediatricians are trained to assess the credibility of certain accounts, they do not tend to put forward as an initial hypothesis that it is such an elaborate lie.

History of Munchausen Syndrome by Proxy

PMS is a variant of Munchausen’s syndrome , a term first introduced in 1977 by English pediatrician Roy Meadow. This professional described at that time patients who had this syndrome as people who had spectacular, strange medical histories, with inventions and lies, in order to get medical attention.

Interestingly, that same year two authors, Burman and Stevens, described a case in which a mother suffering from Munchausen’s Syndrome (now Factitious Disorder) was displacing it in her two young children. They called this phenomenon “Polle’s Syndrome” , synonymous in its day with Munchausen’s Syndrome by Proxy.

The causes of Munchausen syndrome by proxy are still unknown . Studies on the subject that have interviewed perpetrators suggest that they suffered abuse in childhood, or suffer from a Factitious Disorder.

The causes are not known, but progress has been made in the study of the motivations of the parents involved . In the first place, the person suffering from this syndrome does not act with the aim of obtaining material or economic benefits. Paradoxically, they may invest large amounts of their money, effort and sacrifice in the “care” of their victim, despite the fact that they are inflicting great harm.

In summary, their motivations lie in an excessive need for attention, care, compassion, pity and/or recognition by medical personnel and others for their great dedication to the victim. Furthermore, it seems that a relationship of pathological ambivalence towards the victim (of care vs. possible hidden rejection) is produced.

What should be done in these situations? How should professionals who detect such a case proceed? Can the parent who has this syndrome continue to care for his or her child?

There is no single appropriate course of action, especially when there may be a judicialization of the problem. Ultimately the one who can receive more collateral damage is the minor (the other children in the family should also be assessed, if they exist).

In these cases, the best interest of the child will always be the most important thing . Clinicians should ensure that the diagnosis is certain and that the child is safe in the most serious cases (by separating him/her from the family, for example), by contacting social services. It is very important to collaborate with other professionals and carry out a multidisciplinary intervention.

Confession on the part of the perpetrator is not frequent . This is why the treatment is often complex due to the difficulties of the father in recognizing his problems and trying to give them a coherent explanation. Necessarily, the parent with Munchausen Syndrome by Proxy must commit himself to psychotherapy, family therapy and/or the taking of psychotropic drugs.