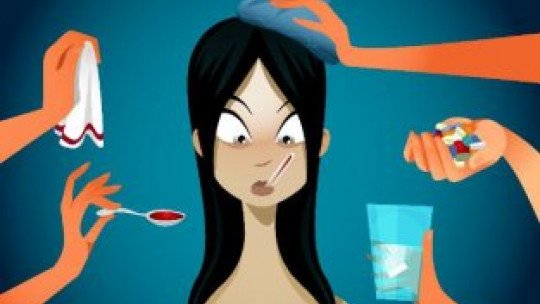 Baron of Münchhausen, a German baron who served Antony Ulrich II and later joined the Russian army, lends his name to this disturbing syndrome because the baron, upon returning to his birthplace, told unlikely and invented stories about his adventures away from home, including riding a cannonball and going to the moon.

One of the first cases of Münchhausen Syndrome was born, which has gained some popularity through its appearance in the House series but is, in the end, a totally real phenomenon.

What is Münchhausen Syndrome?

This factitious disorder consists of a constant and intentional simulation of diseases, usually very convincing and spectacular. To this end, the patient can injure himself, ingest toxic substances and even inject himself with bacteria such as Escherichia coli. The person affected has the motivation to assume the role of the sick person and feel cared for and assisted .

This mental disorder usually begins in early adulthood, is more common among men and especially among people who work in a medical service environment, many of whom have knowledge and an ability to access materials that facilitate the reproduction of the syndrome.

The symptoms are limited by the patient’s knowledge or fantasy . Although these are very varied, the most common are allergic reactions, respiratory problems, convulsions, diarrhea, fever, fainting, vomiting, and even hydroelectric disorders. In addition, people who have this syndrome also tend to require large doses of analgesics and narcotics.

Patients with Münchhausen Syndrome often visit different hospitals complaining of the same ailments they have described at the previous hospital they attended; in addition, their medical knowledge and the accuracy of their symptom representation means that doctors have to repeatedly perform different tests and diagnostic methods on them. They never object to any test, no matter how painful it may be, and they are especially submissive when it comes to hospitalisation in a health centre .

This disorder can be of different intensity depending on the person affected. For example, in Cuba, serious cases have been described in which the patient has been inoculated with the HIV virus.

The patient from Münchhausen can be described in the following points:

The diagnosis of the patient from Münchhausen is based on the elimination of other psychiatric syndromes once the patient has been found to have such a disorder .

On the one hand, medical specialists must rule out other pathologies with very similar characteristics, such as somatization disorder, where there are physical symptoms without a medical illness to explain them. The main difference between somatization disorder and Münchhausen’s Syndrome is that in the former there is a real physical symptomatology, although of unknown origin.

On the other hand, the hypochondriac patient exaggerates some symptoms that he thinks he has, while in Münchhausen Syndrome, despite continuous complaints, the patient is fully aware that his symptoms are simulated. We must also distinguish it from the classic cases of hysteria, where both the production and the motivation of the symptoms are unconscious.

Normally, once other diseases have been ruled out, the diagnostic criteria are these:

2. Desire to have tests, interventions, exams … even if they are told they are unnecessary.

3. History of many hospitalizations.

4. Evidence of self-medication or self-harm such as: cuts, scars, bruises

5. He is usually considered a bad patient as he does not collaborate in the treatments and puts medical decisions in judgment.

Treatment of the syndrome

This phase has special difficulty, since the person who presents Münchhausen’s Syndrome, once he feels discovered, tends to become aggressive . After this, he disappears from the clinic and goes to another one where he again explains his symptoms.

In the treatment of patients with this syndrome there are two alternatives:

One option in which the main problem is that the patient, as we have already said, leaves the hospital to go to another one, or accepts a psychiatric treatment that he will stop following and to which he will not return.

In this strategy the patient is treated psychiatrically but without his knowledge. The goal is that, instead of simulating symptoms, patients learn to seek the attention of others in a different way. In addition, they must learn to cope better with stressful situations and ignore the thoughts that make them seek the role of the sick and hospitalization, all with the help of psychologists and psychiatrists.

Finally, professionals must contribute to the improvement of these people’s self-esteem , and counteract phobic, insecure and dependent behaviours.