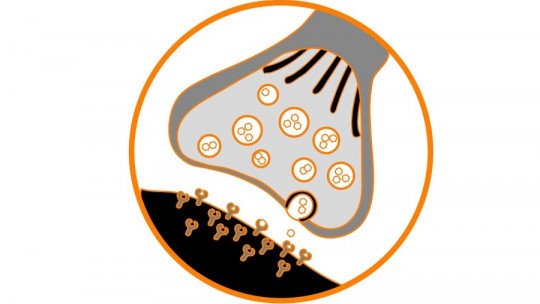 Muscarinic receptors are acetylcholine sensitive receptors that have been linked to various neurodegenerative diseases, especially Alzheimer’s and Parkinson’s disease.

Up to five different types of these receptors and the genes involved in their coding have been identified. In the following we will look a little more deeply at where the muscarinic receptors can be found and what functions they perform.

What are muscarinic receptors?

They are called muscarinic because they are more sensitive to muscarine than to nicotine , unlike their counterpart nicotine receptors, which are very important in the autonomic nervous system. Many substances, such as scopolamine and pilocarpine, influence these two types of receptors by activating them as agonists or selective antagonists.

Muscarinic receptors are found in various places in the body, both in organs and tissues, and within the central nervous system. Among the most prominent tissues where these receptors can be found are smooth muscle and heart tissue, as well as some exocrine glands.

In the brain, receptors of this type are found in the synaptic terminals , regulating the release of neurotransmitters, both from own receptors and those of other neurons.

Acetylcholine is a neurotransmitter that can be found in the brain, although it is also found in other parts of the body such as neuromuscular junctions and ganglia. In the case of muscarinic receptors, they perform the following functions.

Acetylcholine is always used as the neurotransmitter within the autonomic node . The nicotinic receptors of the postganglionic neuron are responsible for the rapid initial depolarization of the neuron.

After this process, there is a hyperpolarization of the neuron, followed by a slow depolarization, which means a recovery period for the post-ganglionic neuron. This process is mediated by the M1 and M2 muscle receptors.

Muscarinic receptors are present at the junction of innervated tissues and post-ganglionic neurons of the parasympathetic system , since acetylcholine is also found in this subsystem of the autonomous system.

Some parts of the sympathetic system use cholinergic receptors. This is the case with the sweat glands, whose receptors are of the muscarinic type.

In the somatic nervous system, nicotinic receptors are used for acetylcholine in the neuromuscular junctions.

Up to five different types of muscarinic receptors have been discovered, which are called “M” followed by a number between 1 and 5. M1, M3 and M5 receptors attach to Gq proteins, while M2 and M4 attach to Gi/o proteins.

By studying the chromosomes, geneticists and molecular biologists have discovered five genes that are involved in the coding of the muscarinic receptors , being named in the same way as the receptors but with the lowercase letter “m”. The genes m1, m2, m3 and m4 code for the M muscarinic receptors from 1 to 4. M5 is a type of receptor subtype that has not yet been detected pharmacologically.

This receptor is found by mediating the slow post-synaptic excitatory potential (ESPS) of the ganglion in the postganglionic nerve. It is common in the exocrine glands and the central nervous system. It is mostly linked to Gq-type proteins.

M2 receptors are found in the heart, where they slow the heartbeat, keeping it below normal rhythm . They do this by slowing down the rate of depolarization.

In human beings, when we are resting, vagal activity dominates over sympathetic activity. If the M2 receptors are inhibited, then the heartbeat increases.

The M3 receiver can be found in various places on the body. They are found in the muscles that are responsible for the contraction of blood capillaries and also in the lungs . As with M1 receptors, M3s are Gq-type proteins.

The M4 receptor is primarily found in the central nervous system and has inhibitory functions . If stimulated with muscarinic agonists, bronchospasm can be caused.

The location of the M5 receivers is not completely known. As with M1 and M3 receptors, M5 is coupled to Gq proteins.

Different brain functions are known in which acetylcholine and its receptors, including muscarinic ones, are involved. This can be observed in some pathologies, related to alterations in cholinergic transmission, being the case of neurodegenerative diseases such as Alzheimer’s or Parkinson’s disease remarkable.

In 1976 the first biochemical abnormality associated with Alzheimer’s disease was known. The enzyme choline acetyltransferase (CAT) in the hippocampus and the cerebral cortex of the patients was found to be at levels well below normal . This enzyme catalyses the synthesis of acetylcholine from its precursor substances: choline and acetylcoenzyme A.

The fact that there is less activity in the CAT indicates that there is a loss of cholinergic nerve terminals that release acetylcholine in brain regions which, once degenerated, are associated with the symptoms of Alzheimer’s. The regions of greatest deficit are the Meynert’s basal nucleus and the temporal lobes.

In the case of this particular disease, the M2 receptor and the nicotinic receptors, which are also sensitive to acetylcholine, are altered, while the M1, which is present in the hippocampus, is more or less preserved. Other neurotransmitters are also involved in Alzheimer’s disease, such as serotonin, glutamate, GABA, norepinephrine and somatostatin.

Biochemical abnormalities with respect to acetylcholine in the hippocampus have been linked to the best known symptom of the disease: memory loss. The cholinergic terminals of the hippocampus are very important for memory formation and therefore the cognitive defects of the disease are related to problems in the function of the muscarinic receptors in this region and the synthesis of the neurotransmitter.