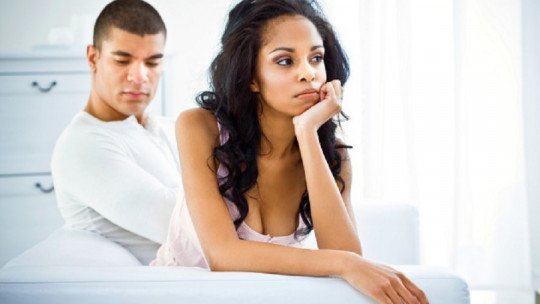 A relationship that is maintained over time is going to experience, sooner or later, some kind of conflict. Although almost no one finds them pleasant, in reality their existence is healthy, as it allows them to express emotions and thoughts and to negotiate patterns of action and intermediate points.

However, it is necessary to know how to manage them, and this may not be so easy. This is influenced by previous partner experiences, different styles of problem management or even different personality traits.

Some people for example find that after an argument with their partner they get angry and don’t talk to him . Why does this happen? How do you react? Throughout this article we will try to give some answers to these questions.

The Law of the Ice: He gets angry and doesn’t talk to me

In all relationships, and especially in couples, it is relatively frequent that for some reason conflicts, small fights and disputes appear, in which both members of the couple end up getting angry .

In some people, an argument means that one party stops talking to the other and ignores it. When used voluntarily, this way of proceeding is called the popular law of ice .

This is a pattern of behavior in which the person who gets angry stops talking to the other person for a while, during which it is possible that not only is there a silence at the behavioral level, but that the subject who practices it becomes mentally and emotionally isolated. The absence of communication may be complete , or it may be limited to short, dry and even monosyllabic responses. It is also probable that in addition to silence there are contradictions between verbal and non-verbal communication.

This behaviour, which bears great resemblance to the phenomenon of ghosting, can have different objectives and is born partly from a personality that can either be immature or arise from an attempt to suppress the emotional reaction that arises in oneself or one’s partner. It can be used in a defensive or aggressive way (either to protect oneself from harm coming from the other or to provoke it in the other).

It is usually used only for the duration of a conflict or for a more or less short period of time afterwards, but sometimes incommunication can remain for long periods.

This way of acting is actually highly unadaptive because it will generate pain and dissatisfaction, and in fact it has been observed that it contributes to deteriorate the satisfaction with the relationship and the couple’s bond. Moreover, it does not allow work on the aspects that have generated the anger, so the reason for the conflict may remain latent.

Some common causes of this reaction

As we have seen, not talking to the couple after getting angry with them can be motivated by many different things. Among them, some of the most common are the following.

One of the defensive causes of this type of behaviour is that which occurs when the subject who is ignoring is not able to cope with the emotions aroused by the discussion or the presence of the partner with whom he has just argued.

In these cases the subject seeks an escape or avoidance from emotions that he does not know how to manage properly, either for fear of doing or saying something that will harm the relationship or that will make him have to give in to something he is not willing to do. It usually happens in very rational people who are not very connected to their emotions, or in those who are highly emotional but have difficulties in managing them.

Sometimes stopping one partner from talking to the other after getting angry is an attempt to end the discussion. In this case we are dealing with a defensive behaviour that does not allow to solve what has caused the conflict, although it may seek to resume the conversation in a calmer situation or after preparing some kind of argument.

In some cases the cessation of communication seeks restitution or compensation from the other, usually in the form of a request for forgiveness. This is an aggressive position that seeks to modify the other’s actions. It is very similar to the following point, with the difference that in this case the aim is not actually to do harm for the sake of it but rather for the other to realize that the subject considers that a certain level of discomfort has been generated.

Another of the most common causes of this behavior is an attempt by the unaware to get what they want. The silence becomes uncomfortable and painful so that the one who receives it may feel bad and modify his behaviour in order to please the other.

We are basically dealing with a type of behaviour with a hint of psychological violence in which one of the members may be forced to do something that he or she does not want to do, in such a way that personal freedom is restricted.

Another cause of the appearance of the law of ice is an attempt to harm the other person as a punishment or sanction for a possible affront, whether real (an argument or a confessed or real infidelity) or imagined (for example, jealousy). In this case we are facing a behaviour of somewhat immature characteristics that does not allow a progress and a resolution of the conflict, besides being able to have abusive characteristics in some cases.

Effects on the sufferer

The fact that your partner gets angry and doesn’t talk to you often affects the person who suffers from it, regardless of the objective of the person who is ignoring it. As a rule, the person will feel rejected , something that can generate pain and suffering. Being ignored by someone we love is a source of stress.

This pain can even be physical: it is not uncommon for headaches, neck pain or intestinal discomfort to occur. It is also possible that feelings of guilt, sleep problems and blood pressure and vascular disorders may occur. Even in some cases endocrine deregulation and changes in glucose levels may occur.

In addition to the above, performance and execution problems may arise due to the concern that this behavior can generate, as well as demotivation and loss of desire to do things. It can also generate anger and resentment against the person who ignores us, as well as lose some hope for that person and even rethink some aspects of the relationship or the convenience of maintaining it or not.

A form of abuse

So far we have discussed different reasons why one partner stops talking to the other partner in anger, which can range from an attempt to take time to manage one’s emotions to a form of punishment for some kind of perceived (whether real or not) wrong.

However, there are occasions when the couple’s communication actively ceases or decreases, not in the context of a specific conflict, but as a control mechanism that is constantly used throughout the relationship.

In other words, we have to take into account that although it can be used in a punctual way without having as a real objective to do harm, it can be one of the expressions of the presence of psychological abuses. In fact, if it is done intentionally we are facing a type of passive violence towards the couple that seeks to manipulate or vex them through their invisibility.

In these cases we would be faced with the use of the presence or absence of communication as an instrument used on a regular basis to make the other person feel unimportant.

How to react to this situation

Being in this situation can be highly frustrating and we may not know what to do. In this regard, it is advisable to first try not to respond with the same behaviour as this can lead to a symmetrical escalation of the conflict, a worsening of the situation and a deterioration of relationships.

First of all, we should ask ourselves what causes the anger or what may have caused the couple to stop talking to each other. The idea is to try to see things from the other person’s perspective , even if the fact that he or she ignores us generates anger or discomfort, in order to understand why he or she may be reacting in this way. In the same way, we must also evaluate whether our own behavior can be responsible for it, and if so, try to repair the possible damage caused.

It is essential to try to approach the other in a positive way and try to make it seem that the lack of communication is causing suffering in us, as well as making it difficult to resolve the conflict. The aim is to encourage communication that allows both members to express their feelings and thoughts freely and without fear.

Now, there is no need to be overly insistent: sometimes it may be necessary to let the other subject reflect on the situation. Forcing things can be counterproductive.

It should also be noted that we must respect ourselves , and in the event that the behaviour persists and our attempts are unsuccessful for some time it may be necessary to set limits on what we are willing to tolerate. It is even possible to rethink even the terms of the relationship. We must also be able to move away from the situation and put it into perspective, so that it does not cause us suffering or reduce its impact.

In the case of abusive and toxic dynamics that seek to manipulate the ignored and harm them without further ado, it is not appropriate to give in since this can give rise to the use of this method as a dynamic for achieving one’s own purposes. Likewise it is also necessary to set limits and move away from this type of relationship .

In some cases it may be useful to consider professional help, such as couples therapy, or individual therapy for one or both members. Also strengthening our communication skills and emotion management can be very helpful.