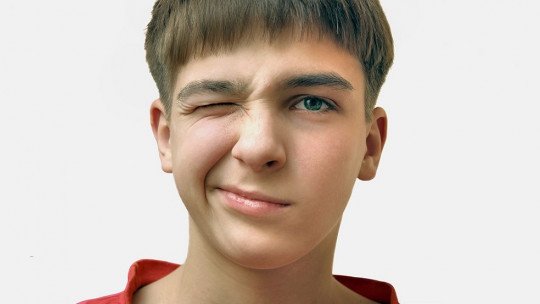 All of us have experienced throughout our lives situations in which, due to our level of stress or nervousness, a series of mild but usually quite annoying nervous tics have appeared .

Although this is usually temporary and doesn’t have to be linked to any medical condition, tics can become chronically established, triggering symptoms of distress and anxiety that tend to make them worse.

What is a nervous tic?

Tics are all those involuntary body movements that appear as a consequence of a nervous contraction . These movements can appear in a multitude of muscle groups that, on other occasions, the person does move at will.

As a rule, the person can more or less control these tics, not without a great deal of effort on his or her part. However, they are more likely to occur repeatedly and in a more severe or intense manner.

Also, both the intensity and frequency of tics will be much higher in in highly stressful situations .

Some of the involuntary movements traditionally associated with nervous tics are

These nervous tics usually first appear in children, especially around the age of five, and are more common in men than in women.
In most cases, tics remain limited in time, fading and disappearing over the course of a year or so. Nevertheless in some cases they can become a chronic disorder , especially when they are associated with some type of physical disorder or alteration.

All those people who suffer some kind of nervous tic usually report a high degree of anxiety and irritation in relation to them, both because it tends to draw attention to those around him as it is not pleasant to experience sudden movements at the most inopportune times. This anguish can lead to feelings of anxiety and stress which can make the situation even worse, since the more anxiety there is, the more likely it is that nervous tics will appear.

What types of tics are there?

There is a small classification for nervous tics , which can be differentiated between phonic or vocal tics and motor tics. In addition, each of these groups can be subclassified into simple or complex tics. Therefore, the grouping would be as follows.

Single-motor category nervous tics are those that occur most frequently in the general population. These use only a limited number of muscles ; such as: movements of the eyelids and eyebrows, hands or arms.

On the other hand, complex motor movements use and combine different muscle groups, resulting in jumps, hits, pirouettes or ecopraxias, in which the affected person performs involuntary imitations of another person’s movements.

As the name implies, nervous tics, both simple and complex, refer to the involuntary and uncontrollable emission of sounds . In the simple ones, the person can perform behaviors such as snorting, throat clearing or nasal stridency, while the complex ones consist of the automatic and uncontrolled repetition of words.

What about Tourette’s Syndrome?

In addition, this condition usually appears in combination with other symptoms such as behaviors of an obsessive-compulsive nature and Attention Deficit Hyperactivity Disorder (ADHD).

The genetic cause of this syndrome has been determined, establishing the hypothesis that it is transmitted in an autosomal dominant manner. However, other genetic conditions may be involved, such as genetic amplification, which refers to the gradual deterioration of the disease over generations.

Usually, this syndrome starts with symptoms of nervousness and restlessness that can be confused with ADHD. Then, motor symptoms appear such as facial tics and small shakes. Finally, phonic tics appear which usually confirm the diagnosis of Tourette’s Syndrome.

Except for the case of Tourette’s Syndrome, whose causes have been established as genetic, it has been impossible at the moment to determine the exact causes of nerve tics not associated with another condition . Like Huntington’s Chorea, which also has tics and a genetic origin.

However, numerous lines of research point to the possibility that brain chemistry, specifically neurotransmitters such as dopamine, serotonin or amino acids such as glutamate, play a fundamental role in the appearance and development of these nerve tics.

On the other hand, there are some specific cases in which the cause of the tic can be determined. These are:

As far as risk factors are concerned, there are a number of situations that facilitate the appearance of nervous tics. These are:

As mentioned above, in most cases nervous tics remit automatically and without the need for any kind of treatment. Nevertheless, in those people in whom involuntary movements interfere significantly with their daily life, there are very effective treatments to attenuate or solve the problem.

The type of treatment most appropriate for the patient will depend on the type of tic, as well as its severity. However, there are three categories of treatment that can be combined for greater effectiveness. These include psychological therapy, medication or deep brain stimulation.

Through techniques such as exposure and response prevention (ERP) or habit reversal therapy , people can identify when a tic is going to appear and prevent it or use movements that are incompatible with it.

Either alone or as a complement to psychological intervention, there are certain medications that are quite useful in reducing the appearance of tics. These medications are:

In those patients in whom the previous treatments have not been effective and the tics represent a serious problem for the quality of life of the patient, deep brain stimulation can be used.
By means of this technique, a device is implanted in the patient’s brain which by means of electrical stimulation manages to reduce the intensity and appearance of the nervous tics.