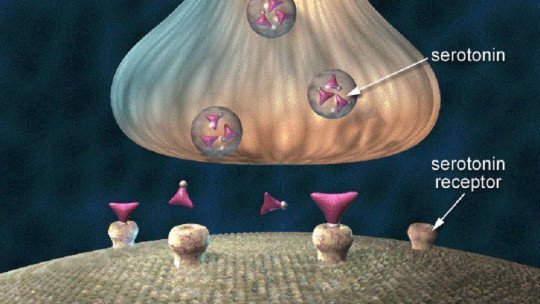 One of the main components involved in this neurotransmission is the neuronal receptors or neuroreceptors . Throughout this article we will discuss their main characteristics and functioning, as well as the different classifications and main types.

What are neuronal receptors?

Within the whole framework that makes possible the transmission of the chemicals involved in the processes of neurotransmission, we find the neuronal receptors or neuroreceptors. These small elements are protein complexes, that is, they are formed by proteins, and are located in the cell membranes of the neuron .

During neurotransmission, chemicals in the intercellular space, such as neurotransmitters, meet the cell membrane, along which the neuronal receptors are located. When a neurotransmitter encounters its corresponding receptor, they will bind together and generate a series of changes inside the cell.

Therefore, a membrane receptor is an essential piece of the molecular machinery that enables chemical communication between cells. It is necessary to specify that a neuronal receptor is a specific type of receptor that only binds exclusively to a series of neurotransmitters and not to other types of molecules.

However, when these are found in postsynaptic cells, the neuronal receptors receive signals that can trigger an electrical potential . This regulates the activity of the ion channels. The influx of ions along open ion channels due to chemical neurotransmission can change the membrane potential of a neuron, resulting in a signal that travels along the axon and is transmitted between neurons and even to the entire neuronal network.

Is it the same as a sensory receiver?

The answer is no. While neuronal receptors are small agents found on cell membranes whose mission is to transmit information by reupturing specific neurotransmitters , sensory receptors refer to the specialized nerve endings found in sensory organs.

Throughout our body (skin, eyes, tongue, ears, etc.) we find thousands of nerve endings whose main mission is to receive stimuli from the outside and transport this information to the rest of the nervous system, thus provoking all kinds of responses and bodily sensations.

Types of neuronal receptors according to form of action

By ionotopic receptors we mean those receptors through which ions can pass . They are considered to be a group of transmembrane channels that open or close in response to the binding of a chemical messenger, i.e. a neurotransmitter, which is called a “ligand”.

The binding site of these ligands at the receptors is usually located in a different portion of the protein. The direct binding between the receptor and the ligand causes the opening or closing that is characteristic of ion channels; compared to metabotropics that use so-called second messengers.

These receptors are usually coupled to G-proteins and, while ion receptors can either excite or inhibit a response, metabotropic receptors have neither inhibitory nor excitatory functions, but exercise a wide range of functions.

Among the main functions of the metabotropic receptors are those of modulating the action of excitatory and inhibitory ion channels, as well as activating a signal cascade that releases the calcium stored in the cell’s reserves.

Types according to neurotransmitter

These are some of the main classes of neural receptors:

They are activated by the catecholamines adrenaline and noradrenaline.

They play an important role in controlling emotions by being linked to dopamine.

Associated with the neuroreceptor GABA, it is essential in the action of some drugs such as benzodiazepines, some epileptics and barbiturates.

They can be divided into ionotropic N-methyl-daspartate (NMDA) and nonNMDA receptors.

They bind to both endogenous and exogenous opioid neurotransmitters and their activation can result in feelings of euphoria, sedation or analgesic effects

They are serotonin (5-HT) receptors and there are at least 15 subtypes within this classification.