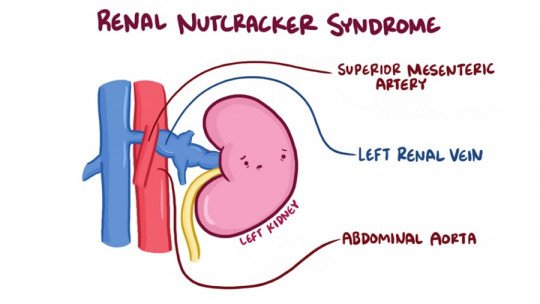 Our body is a highly complex organism, made up of an enormous number of systems that operate in unison to allow us to survive. However, sometimes these systems can be damaged, fail or have their functionality altered or reduced by injury or disease.

With regard to the latter, some are more or less frequent and known, while in other cases we find strange and unusual situations of which there is at least little knowledge due to their low prevalence.

An example of a rare and uncommon disease can be found in the so-called nutcracker syndrome, a renal and vascular disease which we will talk about throughout this article.

Nutcracker syndrome: what is it?

It is called nutcracker syndrome, a rare kidney disease that arises due to compression of the left kidney vein by the surrounding blood vessels and/or other parts of the body.

Such compression generates the entrapment and stenosis of the renal vein, which greatly increases the pressure in that vein. This in turn facilitates the appearance of internal fistulas and renal bleeding.

This syndrome sometimes appears asymptomatically, but symptoms are often seen at the level of the genitourinary system . In particular, it is common for visible hematuria to appear at a macroscopic level, that is to say, for reddish-colored urine to appear when blood is also expelled during urination. Internal and leg varicose veins are also common, as well as pelvic congestion.

It is not uncommon for low-back pain to appear unilaterally , a discomfort whose intensity can vary greatly depending on the case. In addition, in the case of women, dysmenorrhoea or dysregulation of the menstrual cycle may appear.

Dyspaurenia or pain is sometimes observed during intercourse, and it can also generate alterations on an emotional level. Proteinuria, or expulsion of protein through the urine, can also be observed, especially in young people.

Although it is a disease that tends to be benign and does not generate major complications (in fact, the prognosis is almost always very good), the truth is that sometimes complications can appear at the renal level that can compromise life or become very disabling. For example, if recurrent and regular bleeding occurs, it is easy to fall into anemia, nephropathies may appear and blood pressure may be dangerously altered.

The nutcracker syndrome can occur in different ways , the most common being the following (and especially the first).

The most common form of this syndrome is when compression of the left renal vein is given by the aorta and mesenteric artery.

Unlike the previous case, in posterior-type nutcracker syndrome the renal vein is trapped and compressed between one of the two arteries and the spine . The effects and associated symptoms are usually the same.

On this rare occasion, it is the case that the left renal vein is pinched in its anterior branch by the two arteries while the posterior one does the same between the aorta and the spine.

As we have seen, nutcracker syndrome is an alteration that is caused when the aorta and upper mesenteric artery clamp down on and compress the left renal vein, just as a nutcracker would do with nuts (in fact, hence its name).

The symptoms appear when the level of pressure in the renal vein increases, damaging the septa between the veins and the renal system and allowing blood to enter the urine . In turn, this would cause venous circulation to emerge towards territories such as the gonad (something that would influence the symptoms of a genital and sexual nature) and the urethra.

The reason for this clamping is not clear, but it can be caused by alterations at the embryonic level. Although it is more common in the Far Eastern population, it has not been proven that there is a relationship with genetic inheritance , with most cases being sporadic. In the case of children, it can sometimes occur in response to the body changes (which do not occur proportionally throughout the body) characteristic of growth.

In adults, some of the possible hypotheses in this respect propose that it could be caused by anomalies such as duplications of the renal vein, the presence of tumours or inflammations that push the arteries in such a way that they compress the left renal vein, an excessively low body mass (the fat present in this area facilitates more space between the two arteries), hyperlordosis or problems relating to the position of the kidneys during postural changes.

As we have seen before, the nutcracker syndrome is usually benign, although can sometimes be life-threatening .

Sometimes this condition may not require treatment beyond monitoring, observation and control of the patient’s condition, but in other cases it will be necessary to perform some type of intervention, usually surgical.

Among the most frequent and recommended are the implantation of an intravascular or extravascular stent , a device that allows the affected vessel to be kept open. In cases of intense renal bleeding (visible in hematuria), blood transfusions and other interventions may be necessary to preserve the state of health and the maintenance of constants. It may be necessary to perform a kidney auto-transplant or a by-pass in the renal vein.