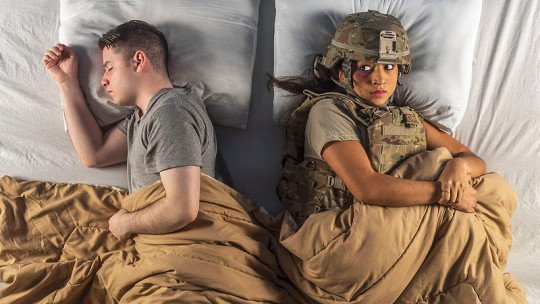 Othello’s syndrome, which is also called monosymptomatic jealousy delirium , is named after William Shakespeare’s drama “Othello, the Moor of Venice”, where the character develops endless suspicions about his partner’s alleged infidelity until he murders her and commits suicide.

This story describes how obsession and stubbornness dramatically destroy the ability to evaluate reality to the point where others are harmed. Below we will look at the characteristics of this delusional disorder.

Steve Wood is a newlywed man who’s now in his thirties. Every time he comes home he undergoes the same ritual. His wife, Debbie, waits for him on the living room couch with a suspicious look on her face and an electronic device in her hand. Without blinking or showing any sign of opposition, he undergoes the same process every day: his wife makes him take a lie detector test .

This is “the most jealous woman in the world,” says Debbie Wood herself, who married Steve Wood only a year ago. This is only one of the many manifestations of Othello syndrome, a delusional disorder based on jealousy .

This disease is characterized by totally irrational behavior. What does this mean? That jealousy goes beyond the actual explanation or reason .

No matter what the evidence or the logic. The person affected by Othello syndrome sees what he wants (or does not want, rather) to see. Usually the illusion causes him to detect patterns in his partner’s behavior that lead him to think about changing his habits.

There are those who suffer from feeling cheated and not being able to prove it , since in the vast majority of cases they are irrational perceptions and totally out of context. The person who experiences Othello syndrome assumes that he or she is the victim of a conspiracy and feels betrayed by his or her partner or by other individuals who, in some way, believe that they belong to him or her.

When we talk about Othello Syndrome, usually patients who suffer it talk about “the other”, without having a defined face or clear characteristics. It is “a ghost”, an indefinite shadow with which the illusion is recreated over and over again without any real indication or clear source of information.

The manifestation of the symptoms may be triggered by small variations in daily life or habits: changing clothes from one drawer to another, buying a different brand of food or being a few minutes late in the usual time of arrival. All this triggers delusional thoughts and jealousy begins to surface.

Unfortunately, Othello Syndrome often results in gender-based violence or even murder. Therefore, at the first signs it is advisable to deal with a professional .

How to recognize Othello Syndrome?

Some aspects that characterize Othello syndrome are the following:

Causes of this delusion

Othello syndrome is a reality whose causes are a mixture between biology and cultural aspects that enhance the importance of possessive love and based on a strong exclusivity . In fact, the pathological jealousy experienced by people with Othello syndrome fits very well with the role of the dominant person who watches over his romantic partner and possible competitors.

However, with regard to the genetic and biochemical causes present in the brain of those who live this kind of delirium, we still do not have much information about this phenomenon. There is little evidence about the physiological reasons behind this disorder, but it is not exclusively a question of behaviour and habits internalised because of habit, at least according to the evidence. According to the latest research, jealousy has an emotional component based on self-esteem.

On the other hand, curiously, this phenomenon also happens among different mammal animals, where the word “self-esteem” is no longer relevant. If we had to give a biological explanation to jealousy, it would probably be a consequence of what happens when the search for the conservation of the family or the descendants is taken to the extreme, added to the fear of loss .

Psychotherapy has to confront the patient’s behaviour and help him to locate the reality beyond his false beliefs about his partner’s infidelity. This process can be hindered when the patient is not aware of his illness and does not accept the possibility of suffering from the syndrome.

In some specific cases, antipsychotic drugs can help with the recovery of impulse control. However, Othello Syndrome is a very complex illness and requires personal therapy rather than the mere consumption of medication , which in any case must be consumed under medical indication and monitoring.

In addition, as they are extremely distrustful patients, supervision by a family member is recommended for adherence to treatment, as they often do not carry it out properly or as the psychologist recommends. Very few patients come voluntarily for consultation or want to undergo treatment. The vast majority seek to rescue their damaged relationship with their partner.