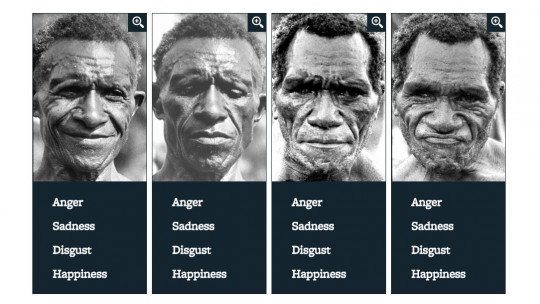 Paul Ekman is not only one of the most media-friendly psychologists (he has participated in the development of the series Míénteme and the film Inside Out), he is also one of the pioneers in one of the most interesting fields of behavioural science: the study of non-verbal language and, more specifically, of micro-expressions .

Knowing more about them could be very useful in improving our understanding of communication and the nature of basic and universal emotions, if they really exist.

Basically, a microexpression is a facial expression made involuntarily and automatically and that, despite lasting less than a second, could theoretically be used to find out the emotional state of the person making it.

According to the ideas of Ekman and other researchers, microexpressions are universal , since they are the result of the expression of certain genes that cause certain muscle groups in the face to contract at the same time following a pattern whenever a basic emotional state appears. Two other ideas derive from this: that microexpressions always appear in the same way in all people of the human species regardless of their culture, and that there is also a group of universal emotions linked to these brief gestures of the face.

Through the study of micro-expressions, Paul Ekman has tried to see basic psychological and physiological mechanisms that are theoretically expressed in the same way in all human societies and would therefore have a high degree of genetic inheritance.

The link between facial microexpressions and the 5 basic emotions proposed by Paul Ekman is based on the idea of adaptive potential: if there is a well-defined set of emotions and a predefined way to express them, that means that other members of the species can recognize them and use this information for the good of their community.

In this way, the situations of danger or those in which the importance of an element of the environment makes individuals become emotionally very active , others will be able to know instantly that something is happening, and will start looking for keys to know in more detail what is happening. This idea is not new; Charles Darwin already advanced it in his writings about emotions in humans and animals. However, more recent researchers have specialized in this field of study, dedicating a good deal of time and effort to analyzing this small area of psychology and physiology. The role of education

It should be said that it is not yet clear whether universal facial microexpressions exist. For this to be the case, the typical behavior of the members of all existing cultures would have to be known in depth, and this is not the case. Moreover, in a laboratory environment it is difficult to make people experience the emotions that researchers want, and not others.

That is why, despite the fact that Paul Ekman has made efforts to investigate the extent to which basic universal emotions and associated facial gestures exist, it is always possible that there is an exception in some remote corner of the planet and the theory of universality falls apart.

However, evidence has been found that, for at least a few thousandths of a second, members of many cultures express their feelings through the same expressions.

For example, in a study published in Psychological Science based on the analysis of films showing athletes playing for a medal at the Olympic Games, it was found that all showed the same type of microexpressions immediately after learning that they had won or lost , although then each modulated these gestures depending on the culture to which they belonged. This is exactly the essence of the microexpressions on which Paul Ekman has theorized: first there appears an automatic and stereotyped reaction to emotional stimuli, and just after that each one takes control of his gestures.

Gestures that betray us

Another of the most interesting ideas about micro-expressions is that, as they are automatic, they cannot be “hidden” or concealed with absolute success.

That is, if a person is trained enough to detect microexpressions, he or she will come to have some knowledge about the other person’s emotional state even if the other person tries to avoid it (unless he or she covers his or her face, of course).

In practice, however, recognizing these microexpressions is not so simple, since in everyday situations there is a great deal of “noise” in the form of information that masks how someone’s small facial muscles move. In addition, specialized equipment is often needed to capture a clear picture of these brief moments.

If the microexpressions are generated following stereotypical patterns, it is logical to think that a method can be developed to systematically identify each one of them. This is why, in the 1970s, Paul Ekman and his colleague Wallace V. Fiesen developed a system to label each type of facial movement linked to an emotional state based on the work of a Swedish anatomist named Carl-Herman Hjortsjö . This tool was called Facial Action Coding System .

However, this does not mean, by any means, that lies can be detected just by identifying microexpressions, and let’s not talk about something like reading thoughts anymore. The fact that these gestures are automatic because of the expression of genes makes, at the same time, the information provided by the microexpressions is tremendously ambiguous, since the details of the context are not “translated” through the muscular movements in the face .

A microexpression can be a clue as to whether someone is sad or not at a certain moment, but it does not tell us anything about what produces that feeling. The same is true of micro-expressions linked to fear. They can be an indicator that there is a fear that the lies that have been told will be exposed, or they can also express the fear that we will believe that what has been said is a lie.

As always, the study of human behavior rarely advances by leaps and bounds, and Paul Ekman’s work on micro-expressions is nothing like a Rosetta Stone of mental states. It can serve, however, to learn more about our genetic predispositions when it comes to expressing emotions , and it can also be studied to learn patterns of empathy and improved communication.However, as microexpressions are by definition automatic and unconscious, it would be impossible to directly influence them.