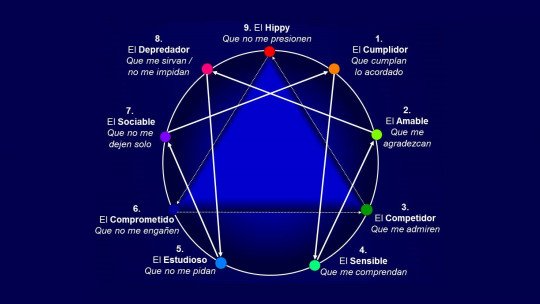 Among the fields covered by psychology, the study of personality types has been attracting great interest and media coverage for decades.

This is partly why, within and outside this science, many proposals for the classification of personality types have appeared which are now quite well known. Among them is the personality enneagram and its classification by enneatypes .

What is the personality enneagram?

The personality enneagram is difficult to define in one sentence, because it has many facets. That’s why the explanation of what it is will come out throughout this article.

Its clearest and easiest facet to address from the outset is the following: the enneagram is a circle with nine lines . This: 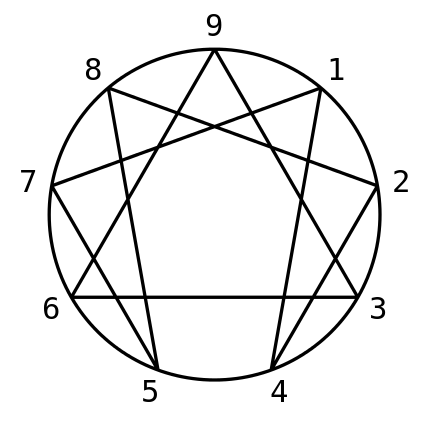 In fact, the term enneagram refers to this geometrical and circular figure with nine points in which the enneatypes are represented.

This figure embodies the second most easily understood facet of what the enneagram is. The enneagram is, in practice, a system of personality classification. As such, poses some categories that theoretically can be used to explain the tendencies and propensities that define the habitual behaviour of people.

These categories with which we try to classify the different personality types by means of the enneagram are the enneatypes, which are numbered from 1 to 9. Thus, each person could be defined by an enneatype, which would include the characteristics in which the person stands out most.

The movements within the enneagram

According to the logic that is usually attributed to the functioning of the enneagram , each person can be explained by the enneagram that best suits him or her . However, if certain atypical circumstances were to occur, the context could cause the person to start acting in a similar way as a person defined by another enneatype would, i.e. his personality would be displaced.

The directions in which one could move from the starting point of one’s Enneatype are explained in the circle with lines, in which the 9 Enneatypes of the Personality Enneagram are represented. Thus, Enneatype 1 (the perfectionist) could move to position 4 (the artist) or 7 (the enthusiast), and each of these other Enneatypes, in turn, could also move to two other Enneatypes. These lines would also serve to point out the possible routes of personal development that each person can take depending on which Enneatype he starts from.

Why the Enneagram is not a Personality Test

What we have so far, as explained, is a system of personality classification and a proposal about how transitions from one personality type to another are made. This, without knowing if there is research that supports the usefulness and robustness of this classification method, and without knowing how each person’s scores on each enneatype could be measured, does not seem far-fetched. But there is a reason why the enneagram cannot be considered a personality test : it is based on pseudo-scientific ideas.

Although the enneagram accounts for different personality types, it is neither a personality test nor, as a whole, a tool that can be used by psychology if certain guarantees of effectiveness are expected. The reason is that it is not a simple system of classification of psychological characteristics but goes much further, because it is based on a system of beliefs based on esotericism and magical thinking .

This means, among other things, that the personality enneagram and the formulation of the Enneatypes not only rest on presuppositions about the functioning of mental processes, but also start from a supernatural vision of what exists and is part of reality.

Thus, for example, it is said that the enneagram can serve to explain our personality, but also to discover the basic mistakes we make in our lives and how we can grow spiritually. This is something very relevant: among the reasons for the existence of the enneagram is that it is an instrument for the spiritual development of the person, serving to identify the essential problems that affect us daily… and all this, without having to give detailed information about what things affect us, in what context we live, with whom we relate, etc.

The reason why these powers are attributed to the use of the enneagram is that it supposedly reflects the way in which invisible cosmic forces structure the functioning of reality and, of course, of ourselves. That is to say, that the usefulness of the enneagram is excused under a layer of metaphysics explained on the basis of imprecisions .

The Enneatypes represent these cosmic forces that govern the functioning of the universe, and to demonstrate this, we appeal to the mathematical curiosities that appear when playing with the numbers represented in the scheme of relationships between Enneatypes represented by the Enneagram. For example, if we divide the number 1 by the number 7 (the magic number), the result will be 0.142857142857, that is, the sequence of numbers that is shown in the figure starting from Enneatype 1 and ending with 7.

These “magic” properties of numbers are universal (they are fulfilled in any situation), and the enneagram finds in these numbers a way to link itself to the essential , which goes beyond context and can only be explained in a very abstract and confusing way.

Like the ancient Pythagoreans, the defenders of the enneagram turn to numerology to try to establish links between the mystical nature of numbers, people and the environment in which they live , exposing mathematical curiosities and assuming the existence of supernatural connections between the structure of the human mind and the functioning of the cosmos.

As a tool, the enneagram is not scientifically useful because it is not designed to be tested and to make it possible to detect faults in its functioning. All it offers are vague explanations that could describe virtually anyone. Therefore, its system of classification of personality types is arbitrary, although that does not mean that one can find satisfaction in seeing oneself through the descriptions of oneself that it offers.

Neither the enneagram was born with the purpose of generating scientifically valid knowledge, nor its method of application has anything to do with the principles that govern psychology as a science. However, among the supposed virtues of this tool is the possibility of offering solutions to major life problems from a system applicable to all people, regardless of their context. In the end, it is assumed that we are all subject to the same cosmic forces.