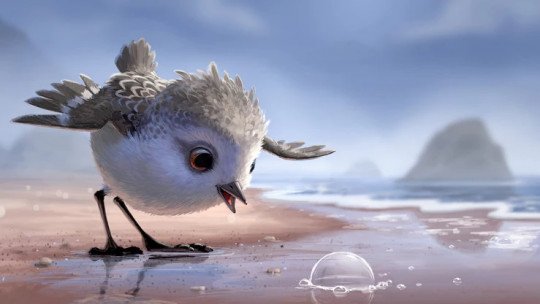 In the summer of 2016, “Piper”, a story that illustrates the life of a baby sandpiper (a common wetland bird) who ventures out for the first time to find food, was covered by many media outlets.

This work directed by Alan Barillaro has been considered by the critics as one of the best short films of Disney Pixar.

Today, the team of the Instituto de Asistencia Psicológica y Psiquiátrica Mensalus presents the award-winning work and shares with us an interesting reflection on this work.

There are many innate capabilities that are reflected in this story, aren’t there?

Right. According to Alan Barillaro, “This is a story about growing up with courage in a world that seems big and intimidating.

The story exposes the courage needed to overcome the fear that uncertainty arouses. This is something that is often repeated in our lives: not knowing makes us feel insecure. Of course, in the face of the unknown, we always have two options: to show curiosity to live it or to fear it in order to avoid it.

The ability to overcome indicates that, after living the experience, we gain something more precious (learning) than what we lose (“comfort”). In this way the goal becomes meaningful. Likewise, fear warns us of what we must protect ourselves from. Well, this system is functional as long as it allows us to keep going and does not hide us inside the nest.

That’s right. In particular, the concept of “feeling small” is very well illustrated. The producer explains: “I love to play with something that people know about, like a beach, and give a new perspective on how a bird that’s only four inches off the ground might feel. A great hit, no doubt. That’s exactly how we can sometimes feel about unfamiliar situations that predict hostility, difficulty and suffering.

It is exciting when the protagonist decides to dive into the water and discovers, besides the richness of the sea bed, the benefit generated by his ability to collect food. How can we understand this message?

The little bird, besides enjoying and feeling capable, connects with part of its identity associated with something that the rest of the birds of its species do.

This “doing as others do” teaches and reminds him who he is, forges the feeling of collective identity and, in parallel, reinforces the feeling of usefulness associated with the ability to get food and share it. This whole “emotional package” makes him an autonomous being.

At the beginning we see how the mother exercises a very interesting function: to accompany the little one without solving the problem…

Yes. This is another aspect that the short shows: the space needed for growth. It is certainly not an easy position. Many parents can see their fears reflected in an idea: “if I leave him alone, will he learn?

Piper’s mother knows that her son needs to understand that the food won’t come to the nest, but that the only way to survive is to go after it. In fact, she doesn’t leave him alone, she accompanies him by example. The parents’ assurance in this regard will either facilitate or hinder the child’s maturation process. “Letting fly” without ceasing to be is the great recipe. A recipe that is not magic and, as all parents know, is not an easy task

“To all the parents who, day after day, do the work of teaching and loving unconditionally.

Source of the short film and the voice of the creator: www.usatoday.com