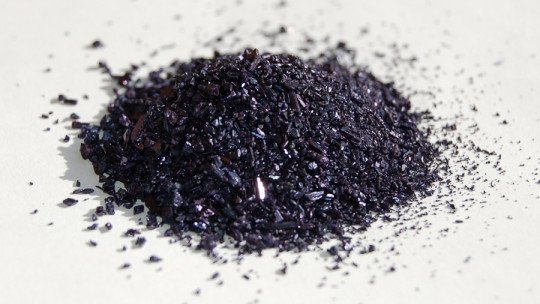 In nature we can find a great quantity of substances and elements, which interact with each other continuously. This interaction often involves some kind of chemical reaction, something that occurs even if we do not see it with the naked eye.

One of the best known and most common chemical reactions in nature is oxidation, which occurs when an element begins to lose electrons due to its interaction with oxygen. This reaction is linked to processes such as aging and cell deterioration, but nevertheless it is very relevant and very useful in different areas of our lives or society. And even often it is sought to generate compounds with great oxidative power. An example of this is potassium permanganate , which we will discuss throughout this article.

What is potassium permanganate?

Violet or dark purple (mainly due to permanganate, although as it dissolves in increasing amounts of solvent it can change colour and even lose it completely), it is a compound that does not form part of carbon and would therefore be classified as inorganic.

Also known as Condy crystals or chameleon minerals , potassium permanganate is a highly valued product in various fields and enjoys multiple possible applications, especially because it is a very powerful oxidizing agent. It can be found on the market in both liquid and solid form, and dissolves easily in water, alcohol or acetone (among others). It is a product that is not per se flammable but extremely corrosive, and it can generate violent and even explosive incendiary reactions if mixed with certain substances.

Some of its main applications

This compound is highly appreciated in different areas and activities, possessing due to its high oxidative power a series of properties that make it a very useful product. Among the functions and applications for which potassium permanganate is used, we can highlight the following

One of the most interesting and common applications of potassium permanganate is the purification of large bodies of water, helping to eliminate bacteria and improving water quality. It is used, for example, in water pipes and drains, and even in water purification.

2. Preservation and disinfection of some foods

Another use of potassium permanganate is linked to the food industry. Specifically, is used to prevent the oxidation of fruits such as bananas and help preserve them even in the absence of refrigeration . In some regions it is also used in a diluted form to wash some foods, due to its antiseptic action.

Potassium permanganate also has applications in industry or chemical research, allowing the transformation of matter through oxidation processes in such a way that different types of compounds and reagents can be obtained.

Although it is no longer used today, in the past potassium permanganate was used along with other components in photography , allowing the chemical reaction resulting from its mixture to use the first flashes .

In addition to the above applications, potassium permanganate also has a number of relevant clinical applications . However, given that the high oxidative power of this compound means that it has great toxic and abrasive potential, it can only be used at a medical or veterinary level when it is completely dissolved in large quantities (at least in proportion to the amount of potassium permanganate) in water or another substance. In fact, medical use is generally found in a ratio of 1/10000.

The indications for this type of solution are usually limited to topical use, being a powerful antiseptic in different skin problems (such as dermatitis), some ulcers or fungal infections on the skin (it is common on the feet). It is also used to relieve the pain of corns, and sometimes even to treat hemorrhoids (in this case you should always consult a medical professional first). Sometimes it is also used as a mouthwash.

It also has astringent properties (i.e. it causes the tissues to shrink and dry out), so it is sometimes used for superficial wounds or skin disorders that cause suppuration. Sometimes it can be used to treat poisoning or intoxication, being used in some gastric washes caused for example by snake bites or white phosphorus. It is also used to treat hyperhidrosis or excessive sweating of different parts of the body.

It also has veterinary uses, usually to treat skin and/or fungal infections in animals such as fish.

Risks, side effects and contraindications

Potassium permanganate is useful in different areas, but the truth is that is a very dangerous compound if it is not used with the caution it deserves . Not for nothing, it is as we have said very oxidizing and even corrosive, so it should not be handled with bare skin.

Its danger increases greatly if it is ingested, and it can be highly toxic and even fatal if consumed in sufficient quantities. In this sense, it can cause severe respiratory problems and even internal bleeding. Its vapours can also cause irritation and inflammation of the respiratory tract.

With regard to the diluted version for medical use, accidental ingestion may cause nausea and intestinal problems, liver or kidney problems, cardiovascular depressions or oedemas . In addition, when used topically it can cause irritations, burns and even ulcers. It should be taken into account that it should not be applied during pregnancy or breastfeeding unless recommended by a physician, and neither should those suffering from kidney disease or with extensive problems or injuries or with ulcers.