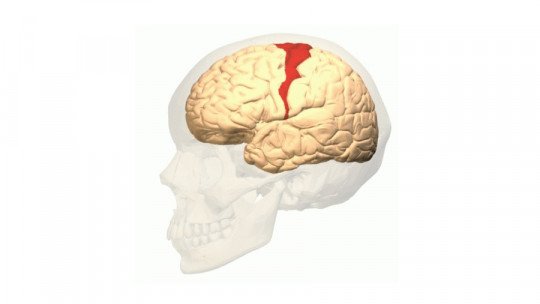 The primary motor cortex is the main motor area of the brain that manages all the actions involved in controlling voluntary movements. It is responsible for transmitting the commands to the muscles to tense or contract and produce the motor action.

In this article we explain what the primary motor cortex is, where it is located, what functions are attributed to it and what kind of alterations can originate if this brain area is damaged.

The primary motor cortex is one of the main brain regions involved in motor functions. It is located in the frontal lobe and along the precentral gyrus , on the lateral surface of the cortex, and extends medially into the longitudinal fissure of the brain forming the anterior paracentral lobe.

One third of the fibers that make up the corticospinal tract arise from the neural nuclei in the primary motor cortex, whose axons also terminate in the motor nuclei of the cranial nerve in the brain stem, the basal ganglia, the reticular formation and the red nucleus; the projections of the latter structure constitute the rubrospinal tract which, together with the corticospinal tract, form the main lateral descending motor system.

The primary motor cortex contains pyramidal cells of the cortical layer V, also called Betz cells , the upper motor neurons responsible for transmitting the commands needed to initiate voluntary movements. As we will see below, another peculiar characteristic of the primary motor cortex is that the motor responses obtained when it is stimulated are organized in a somatotropic way.

The primary motor cortex contains a topographic map of the muscles of the body in which the leg is represented medially, the head laterally, and other body parts in between. Within this map there are different neuron nuclei representing different muscles. However, the areas represented are not proportional to their size in the body, and it has been shown that after amputation or paralysis, motor areas can change to adopt new body parts.

There is a spatial arrangement of motor responses in which adjacent muscles are controlled by adjacent regions of the primary motor cortex. This somatotope map reflects that of the somatosensory cortex . In fact, it is located just on the opposite side of the central groove. These two areas are adjacent and are connected by the cortical tissue of the paracentral lobe.

Neurons in a given area of the primary motor cortex receive proprioceptive information from a muscle or small group of synergistic muscles and send their output back to that muscle or group of muscles via a multi-synaptic pathway through the brainstem and spinal cord. These actions facilitate the planning and precise execution of movements, functions characteristic of the primary motor cortex.

The main function of the primary motor cortex is the management and execution of voluntary movements , by transmitting information through the spinal cord to move the different parts of the body.

Voluntary or striated muscles are so called because an order is needed for them to produce movement, as opposed to involuntary or smooth muscles, whose activity depends on the autonomic nervous system.

Neurons distributed by the primary motor cortex produce a pattern of body representation called the motor homunculus . The extension of each body part over the cortex corresponds to the degree of motor control exercised over each of the parts represented. For example, the hands, lips and tongue are represented by large regions of the cortex, and the toes by a relatively small area.

The primary motor cortex, in its most medial portion, controls the body below the waist. In its lateral portion, it manages the muscles of the body above the waist. And the control it exerts through the pyramidal tract is greater over the muscles of the hand. In contrast to the legs, which function in locomotion, the face, head, and hands are used to transmit signals that express emotions.

And as far as sensory functions are concerned , the primary motor cortex is also responsible for kinaesthetic perception of the movement of different parts of the body, for discriminating vibrotactile frequency or touch response, among others. It also seems to play a role in verbal coding during the processing of non-semantic elements and in topographic memory for visual references.

Disorders associated with damage to this brain area

An injury to the primary motor cortex can cause paralysis of the contralateral muscles . The affected muscles may become flaccid at first, then over the course of several days, the reflexes become rapid and the muscles become spastic.

Control of coarse movements reappears after several weeks or months, but fine movements, especially of the hands, are often lost permanently. Less serious consequences of damage to the primary motor cortex also include: lack of coordination, inability to express oneself clearly and speech difficulties, late responses, etc.

Problems derived from an injury to the primary motor cortex, such as facial paralysis, monoparesis or hemiparesis , seriously affect the quality of life of patients who suffer it, often generating an inability to correctly carry out basic activities of daily living or to communicate correctly with others (due to problems that may arise when walking or gesturing, for example).