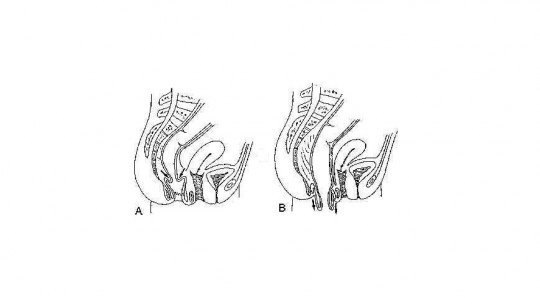 The digestive system is one of the most important parts of our organism , since through food we can obtain the energy and nutrients from the outside environment that we need to keep our body functioning and to survive.

But the digestive system has not only an entry point but also an exit point: the rectum and the anus. These elements, which in addition to the digestive system are part of the excretory system, are fundamental in order to eliminate the organic waste produced by the functioning of our organism and the remains of food that our body is not able to use.

However, sometimes diseases, disorders or alterations may appear that make the excretion of faeces complicated or uncomfortable, or even cause a part of our organism to protrude. This is what happens with rectal prolapse , which we will discuss below.

What is a rectal prolapse?

Rectal prolapse is a medical condition in which the rectum protrudes outside the anus, meaning it slides out. This protrusion may be partial or complete, and it may come out of the anus. The final part of the intestine loses its natural anchorage which makes it remain inside the body, causing the slippage. The rectum is inverted, with the mucosal lining of the rectum being visible from the outside in the form of a red, finger-like extension.

This problem can be quite uncomfortable for the sufferer, as it is common for irritations, pain or defecation problems to appear. It can also generate symptoms such as diarrhea or constipation, secretions or even fecal incontinence (losing the ability to control excretion). Likewise, the prolapsed rectum may become perforated or ulcerated, generating bleeding that may even require urgent intervention. This problem can appear at any age and in either sex . It is especially frequent in children under 6 years of age, being another type of population in which it is highly prevalent in adults over 50 years of age. It tends to be more frequent in women.

Rectal prolapse can occur in varying degrees depending on which parts of the lower third of the intestine protrude . There are different variants in this respect.

Rectal prolapse in which only a part of the lower rectal mucosa protrudes, other parts of the rectum or intestine not being affected. It is the most common in minors.

The most common. The anus remains in its usual position, protruding only the rectal mucosa as the external wall and the deep part of the peritoneum. In this case the prolapse contains inside part of the small intestine , having a sac-like cavity.

The upper rectum and distal sigmoid invaginate or slip from one part of the colon or rectum into another, making the prolapse hidden and not visible from the outside. This is the least common of these problems.

The causes of a rectal prolapse can be very diverse, being the direct cause the loss of support of the lower part of the digestive system . The origin of this loss of support is not always completely clear, but it has been observed that it tends to appear in people who fulfil certain conditions or perform situations of considerable effort.

Possible reasons for this loss of support may include malformations, hyperplasia of the colon, or pelvic problems that allow a hernia to develop. It can also appear in situations of continuous stress of the anus or the abdomen such as diarrhoea or constipation, and even in the face of chronic coughing.

On the other hand, its emergence has been observed in women after childbirth . Likewise, muscle or nerve problems, infections by worms or cystic fibrosis have also been considered possible causes of this condition.

Rectal prolapse is a problem that can be serious, but its treatment can vary greatly depending on the severity of the prolapse or the degree and tissues that protrude. It should always be a procedure performed by physicians.

When we are dealing with a partial and slight prolapse, the treatment can only be to gently reintroduce the rectum into the anus, generally with the help of a compress to push the mass inwards .

Sometimes treating the causes can solve the problem, at least in children. For example, laxatives can be applied in cases of constipation.

In adults or in severe cases a surgical intervention may be necessary to relocate and fix the matter of the digestive system and the muscles that hold it in place. This surgery can be at the abdominal or perineal level, and there are different types of intervention. However, this type of intervention has its risks.