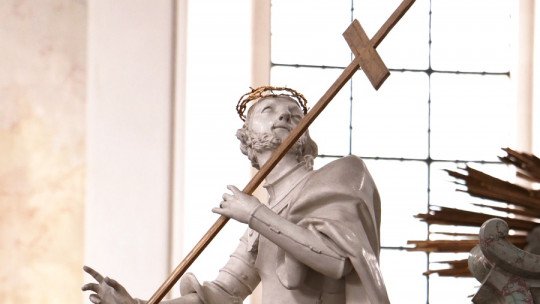 All religions have rules that define how their believers should behave properly. These are the religious rules, which are very varied depending on the creed and can imply various consequences at the social level.

Although there are many religions, almost as many as there are cultures, all of their norms have a number of common characteristics. If you want to discover what these characteristics are, we invite you to continue reading this article.

What are religious standards?

Religious norms are sets of rules that delimit a series of behaviors and habits that must be carried out by the believers of a religion . Normally, these rules are stipulated in some sacred text or are dictated by people who consider themselves the representatives of God’s will or deities.

Failure to follow these standards may be interpreted as an offense by other believers, a disobedience to God’s will, or a sin. That is why, through the use of these rules, an attempt is made to prevent believers from carrying out acts that violate the designs of religion. It may also be the case that not following these rules is not seen as such a bad thing by society, but it is for the individual, who acquires a deep sense of guilt.

Traditionally, religious rules have sought to regulate people’s behaviour , and have acquired key importance in the correct functioning of the societies of yesteryear.

Religious norms have a number of characteristics, which are present in most organized religions . Let us look at the most outstanding ones.

Traditionally, the emergence of religious norms preceded legal ones, and they have provided the basis for the configuration of the legal system

That is why in many cultures, even when there is a more or less secular legal system that legislates the correct behaviour of citizens, its laws are often based on old rules formulated from a religious perspective.

Religious norms are difficult to change over time. Unlike social and legislative norms, which admit a greater degree of change, religious norms can remain hundreds of years without any modification .

This is because, within the context of obedience to a particular divinity, changing that standard or admitting a certain freedom could be interpreted as not respecting God’s designs and acting on one’s own.

Compliance with these rules is not expressed openly and externally, but has more to do with agreeing to follow them or not, and consequently behaving according to how these rules are set.

Every norm must be internalized and accepted by the believer himself , doing so out of devotion to God or to the gods he believes in.

In most cases, religious rules do not allow them to be imposed on people by force. Each believer is free to follow the established norm or not.

No one forces the believer to follow the religious norm. Although each norm, according to the religion that marks them, implies a series of consequences in case they are not fulfilled, they cannot be followed outside the person’s will .

Unilateral refers to the fact that in religious rules there is no third person who has the capacity to decide whether or not that particular rule should be respected.

In other words, each person who believes in a religion has the obligation to follow the rules set by his or her creed, but this obligation is not determined by other people, but is a decision of the believer himself or herself with regard to his or her belief.

Religious norms are, in essence, those behaviors that God or the deities of a religion allow to be done and those that are not tolerated.

By heteronomous, we mean that a third party, such as a prophet, a priest or another religious figure, dictated these rules, ensuring that they were being indicated by the deity he claimed to represent.

The person who dictates the religious norms, but does not impose them or force their fulfillment, usually says that it has been through a divine revelation. The believer does not have the power to change the norms or add new ones, but must simply comply with them .

In most religions, in case of respecting all the rules that have been dictated from that belief, some kind of benefit or privilege is promised in life or in the beyond .

But it is not only promises of good things that are made if the heavenly designs are obeyed. In many cases, the promise of hell, of eternal suffering and unhappiness is also made in case of sinning or acting against the divine will.

Some examples and social implications

All religious norms aim at modifying the behavior of the population in such a way that it is appropriate and in accordance with the designs of what is interpreted as the will of God.

There are many, many more examples than existing religions. Below we will see a series of examples of real religious norms , followed by the believers of such influential religions as Islam, Judaism and Christianity, as well as explaining their social implications.

One of the most famous religious rules of Islam is that which concerns the wearing of a certain type of clothing if one is a woman. Whether in the form of a veil covering the hair of a burqa, a garment that covers the entire body, women in Islamic society must wear some kind of garment that hides their attributes and thus does not provoke lust in men, according to their religion.

Although there is a great deal of variety among Islamic countries in the degree to which this religious norm is followed, in those countries where Sharia or Islamic law is still in force this norm has legal consequences, such as imprisonment, flogging or stoning.

In Christianity, both nuns and priests must wear special garments according to their position in the religious hierarchy, besides being modest and not making them sin with pride .

Another example is the case of Christian women when they get married, who must wear white as a symbol of their purity and virginity.

Returning to Islam, during the month of Ramadan, it is forbidden to eat food during the hours when the sun is in the sky . At night, the consumption of food is allowed. This religious rule allows for exceptions: children, pregnant and menstruating women and the sick may eat and drink according to their needs at the time they require.

Another Islamic rule related to food, shared with Judaism, is the prohibition to consume pork , considered an impure animal. The consumption of alcohol is also frowned upon.

In Christianity, the wine of the Mass represents the blood of Christ, although this does not mean that the consumption of this drug in an abusive way is frowned upon.

During Easter week, in most Catholic countries, red meat is not eaten and is replaced by chicken or fish. This is done to coincide with the anniversary of Jesus’ death, representing the suffering he had to endure before his crucifixion.

3. Intervention on the body

Religions like Christianity do not accept to intervene on the body, since it is seen as a creation of God and, therefore, only he has the right to modify what he has created.

Thus, Christians generally frown upon tattoos and piercings, and in more radical cases, blood transfusions and vaccinations. This results in the association of individuals with these types of body marks with delinquency or belonging to areas not in keeping with the faith.

As for blood transfusions and vaccinations, not accepting them for religious reasons is not only a danger to the individual himself, but also to people close to him who may be affected by the disease from which they are not protected.

On the other hand, in religions such as Hinduism and in several Pacific religions body modification is a religious symbol . Hindu women wear nose piercings, and ceremonial tattoos are common in Polynesian religions.

In Judaism, a newborn baby is circumcised, while in Islam a similar procedure is performed, although it can be said that this was done before the emergence of the Islamic religion.

This type of procedure, in which surgery is basically performed on the penis with no medical purpose, can be perceived as a male version of female genital mutilation, something that in the West is considered as mistreatment of women.

As we were saying, there are religions like Judaism and Islam which flee from certain animals, in this case the pig.

Others, however, love certain animals . In India, cows are considered sacred animals, which cannot even be touched. As a result, on more than one occasion the cows, which roam around the cities at will, can paralyse the traffic by planting themselves in the middle of the street and no one does anything to stop them.

In Ancient Egypt, cats were practically seen as gods, and large sphinxes and statues were erected in their honor, as well as having certain privileges that citizens of lower statuses were not entitled to.

The worship of cats was such in Egypt that they were even honoured after the death of the miners, by building tombs and placing their mummies in them . In those same tombs they accompanied them with offerings to the gods, which were very expensive.

In certain Islamic countries, theft is punished by a law that is a re-adaptation of the ancient code of Hammurabi, which can be basically summarized with the principle of an eye for an eye. The thief, who has used his hand to commit a crime, will see his hand amputated as just punishment for his criminal act.

It should be noted that in most religions, both theft and murder are considered sins and are not accepted in any way.

In Islam, there is a religious norm of visiting Mecca, a sacred Arab city, at least once in a lifetime. Every year, millions of Muslims visit this city to gather in the square where the Kaaba is located and pray around it.

In the Christian world there is the Way of St. James, which also moves thousands of people every year to the north of Spain to honor Santiago el Mayor, who is buried in the Galician city of Santiago de Compostela.