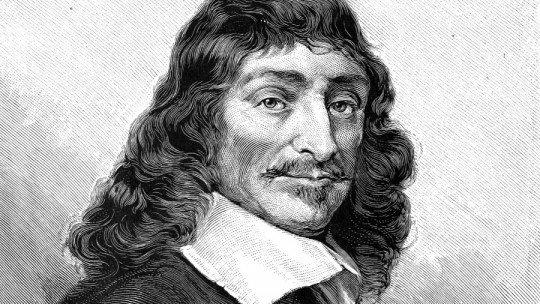 René Descartes has been one of the great thinkers of history . His influence on Western thought and philosophy is undeniable, especially if we consider his famous work “The Discourse of Method”

He was well ahead of his time, a time when Galileo Galilei, a contemporary of his, was being censured by the religious elites, making it difficult at first for Cartesian philosophy to even be published.

We will now look at the life and work of this philosopher through a biography of René Descartes , as well as understanding his philosophical thought in more detail.

Mathematician, physicist and, better known as a philosopher, Rene Descartes has been a multifaceted character. We will now look at his biography.

René Descartes was born in La Haye, France, on March 31, 1596 . His mother died when he was barely 13 months old, and his father, being busy with his work in the parliament of Brittany, barely had time for the young Descartes, so his education fell into the hands of his maternal grandmother.

Little René was educated in a Jesuit school in La Flèche , between 1604 and 1612, which at that time was one of the most famous Jesuit institutions in Europe. This school was of great importance for his intellectual development.

There he learned several things, although he focused on teaching traditional liberal education, theology and how to be a good gent. Years later, Descartes would become critical of the education he received in such a center. At La Flèche, Descartes obtained his bachelor’s degree and would later travel to Potiers to obtain his law degree.

In 1616, when he was only 22 years old, left for the Netherlands to serve in the ranks of the Mauritian army of Nassau , a Protestant prince in the Thirty Years’ War. Later, he would join the ranks of Maximilian I of Bavaria, who was a Catholic. This may seem paradoxical, given that in such a contest Catholics and Protestants were at odds. Descartes would admit that he had joined different armies to get to know new countries and to understand the reality of each side.

During the winter of 1619 Descartes was blocked in a small village on the Upper Danube near Ulm. He remained isolated from all social relations, beside a stove and with no company other than his own thoughts. Being there would reveal to him the basis that would lay his philosophical system: the mathematical method and the more than famous Cartesian principle, “I think, therefore I am” .

During the night of November 10-11, 1619, a victim of feverish excitement, Descartes would have three dreams in which the form of his method, and his vocation to consecrate his life to philosophy and science, would be revealed to him.

Renouncing military life, Descartes took the opportunity to travel through German and Dutch lands, returning to France in 1622. He would spend some time in Italy, between 1623 and 1625, and then return to France , settling in Paris and making contact with the most outstanding scientists of the time.

In 1628 he would return to the Netherlands, a country where science was advancing by leaps and bounds because of relative freedom of thought and the scientific was popular, residing in the Netherlands for 21 years. For the first five years he would work out his own system of the world, what he understood the human being to be and how our soul was encapsulated in our body.

In 1633 he was already well advanced in the drafting of Treatise on Light , a broad text in which he spoke about metaphysics and physics. However, he decided not to publish it, given the terrible condemnation of Galileo Galilei. Descartes defended in that work the Copernican heliocentrism . In the end the work would be published posthumously.

In 1637 his famous “Discourse on Method” would appear, presented as a prologue to three scientific essays. The book would gain wide popularity and many educated readers would dare to send letters to its author to discuss what they thought or possible errors in the Cartesian method.

He proposed the Cartesian method for all sciences and disciplines, and consists of breaking down the most complex problems into simpler parts, until their most basic elements are detected, simple ideas that can be presented as obvious reasons. Then it would come to relate these same ideas to understand the more complex postulates that they were constituting.

In his mechanistic physics he explained that extension was the main property of material bodies, a postulate set out in his Metaphysical Meditations of 1641. In this work, he tried to demonstrate the existence of God and his perfection, as well as the immortality of the soul, already noted in the fourth part of the Discourse on Method . As his popularity increased, criticism and threats of religious persecution became dark shadows that hung over Rene Descartes.

Flight to Sweden and end of life

Tired of struggles, criticism and threats from ecclesiastical and academic authorities, both French and Dutch, Descartes, in 1649, accepted the invitation of Queen Christina of Sweden, who invited him to reside in Stockholm as her preceptor of philosophy .

This was no accident. Descartes and the monarch had been in intense correspondence. But even though Rene Descartes enjoyed the company of Christine of Sweden, a cultured queen, the country he led was not so pleasant to him. He even described it as a land of bears, where the thoughts of men freeze, along with water.

In the Scandinavian country Descartes had to get up at four in the morning, in the middle of the night and with the winter cold eating away at his bones, to give the queen philosophy lessons , because the monarch only had that free hour due to her royal obligations. This would surely be what ended her life, since she died on February 11, 1650 from pneumonia, having been in Sweden for only five months.

René Descartes is considered the promoter of modern rationalist philosophy , one of the first philosophical currents after the end of the Middle Ages. His approach aims at solving philosophical and scientific problems by means of a knowledge that guarantees the certainty of the same postulates.

In his Discourse on the Method of 1637, he stated that he intended to develop a doctrine based entirely on new principles, breaking with the philosophical teachings he had received as a student at La Flèche. He was convinced that reality responded completely to a rational order . He wanted to create a method that would make it possible to reach the whole field of knowledge with the same certainty as provided by the exact sciences, such as geometry and arithmetic.

His method is composed of four procedures:

In order to fulfil the first step, the methodical doubt is raised , that is, to question all the knowledge acquired or inherited . All knowledge has a part that can be criticized, but at the same time there is a part that is impossible to question, and this is the very action of doubting.

That is, we doubt reality, we doubt knowledge, but what we cannot doubt is that we are doubting. In this way we arrive at an absolute and evident certainty: we doubt. Doubt is a thought, with which we are doing the action of thinking . One cannot think without existing, with which the fact of thinking, doubting and performing other cognitive actions implies the indisputable existence of the thinking “I”. It is here that his famous phrase arises, “cogito, ergo sum”, that is, the maxim “I think, therefore I am”.

It is on the basis of this simple phrase, although with absolute certainty, that Descartes sets out his entire philosophy. One cannot trust in the existence of things , because, even if we see them or touch them, how can we be sure that they are not deceiving us? How can we be sure that our senses give us true information?

On the other hand, thought is not a material thing, but it contains ideas of things, representations of reality. What arises from this is whether our thought contains any idea or representation that can be perceived with the same clarity and distinction, which he considers to be two criteria of certainty, with which we perceive reality.

Descartes reviews all the knowledge he had previously discarded at the beginning of his philosophical search. On reconsidering them he sees that the mental representations of our way of seeing reality can be encompassed in three categories:

Innate ideas are already, as their name suggests, in us at the moment of birth. They are ideas like beauty or justice. They are not something found in the external world, they are abstract aspects.

Adventitious ideas would be those that come from external things , such as the representation of what a horse, a table or a building is. They are the result of our experience, obtained through the senses. The problem is that, since our senses can fail, we cannot be sure that the adventitious ideas we possess are true.

Finally there are the fictional ideas that, as their name suggests, are those representations of things that do not exist , such as monsters in mythology, unicorns or any other. They are invented ideas, creativity. These fictitious ideas are the result of the addition or combination of other ideas that would be adventitious.

Our existence and God’s

When we examine innate ideas, which are not given to us through the senses since they have no external representation, we find a rather paradoxical fact. Human beings are not perfect, since we die and have our weaknesses, but we can conceive of ideas of perfection , such as that of God, an infinite, eternal and immutable being.

The idea of God, something perfect, cannot arise from a finite and imperfect individual, it has to come from before, by action of another being, from God himself. The fact that we believe in the existence of God as a perfect being when we are imperfect is the demonstration that God exists, because if it has not been he who has put his idea of perfection in our imperfect mind, who has it been?

Descartes defines the concept of substance, understood as that which exists in such a way that it only needs itself to exist . Substances manifest themselves through modes and attributes. Attributes are essential properties that reveal the determination of the substance, that is, those qualities without which a substance would cease to be that substance. Modes are not properties, but merely accidental, situations or temporal aspects.

The attribute of bodies is extension, since without it they cease to be bodies. All other properties, such as their shape, color, location, and movement are only modes, i.e., relatively temporary phenomena.

The attribute of the spirit is thought, since the spirit always has that property . Therefore, there exists a thinking substance, called “res cogitans”, but this is not a body, since it lacks extension, and its attribute is thought. Then there is a substance that is composed of physical bodies, called “res extensa”, whose attribute would be extension, understood as three-dimensionality. Both substances are irreducible to each other and totally separate, and this conception of these two substances is what is called Cartesian dualism.

The human being is composed of body, that is, extensive res, and soul, res cogitans . But this clashes with the idea that these two substances are totally separate. In the case of the human being, the soul resides in the pineal gland, directing the body. This is how our res cogitans and our res extensa establish contact, the soul being the one that influences the body.