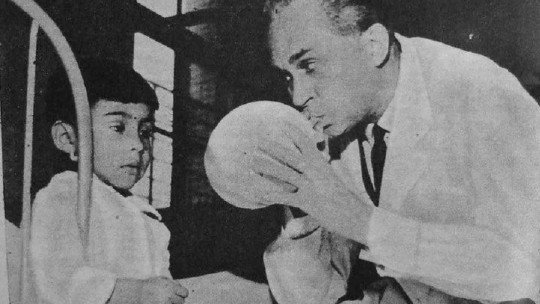 When we talk about a person with depression, we usually picture a man or woman suffering from a depressed mood episode and with little ability to perceive pleasure and joy in what he or she is doing, despair, and probably some passivity and lack of desire to do anything. The image that has come to our mind will probably be that of an adult or a teenager. But the truth is that there are also various types of childhood depression.

One of the first authors to investigate them, and creator of various concepts, was René Spitz. The life and work of this author is of great interest, which is why throughout this article we will see a short biography of René Spitz .

René Spitz, whose full name was René Árpád Spitz, came into the world on January 29, 1887. He was born in the city of Vienna , the eldest of two brothers, sons of Árpád Spitz and Ernestine Antoinette Spitz. He was part of an important and economically influential family from Hungary of Jewish origin. He also had a younger sister, Desirée Spitz (later Bródy).

Despite being born in Vienna, the family moved to Budapest, where the young Spitz would grow up and begin to develop and train academically.

Spitz would enter the University of that city, studying medicine. Besides Budapest, he studied in other cities such as Lausanne and Berlin. During these years he worked with professionals such as Sandor Ferenczi and began to become familiar with the work of Sigmund Freud . All this made something that appeared in Spitz a great interest with respect to the human psyche and psychoanalytic theory.

However, two years later, during 1932 he moved to the city of Paris, where he would teach psychoanalysis at the École Normale Supérieure . Likewise, little by little, his interest would focus on infantile neurosis, and he began to focus his research on the development of minors from 1935 onwards.

But there came a time when Nazism rose to power and a large number of people had to emigrate in order to avoid war, including Spitz.

Moving to America and working life in the continent

In 1939, during the Second World War, this important professional left Paris and went into exile in the United States because of the risk to his life due to his Jewish ancestry. There, he would serve as a professor at the City College of the City University of New York. He also made a film of his research that would be released in 1952 and will also hold a job as a professor of psychiatry at Lenox Hill Hospital.

He later moved to Denver, Colorado, where he was hired as a professor at the University of Colorado. Beyond his teaching duties, in this period of his life he would begin to focus increasingly on mother-child dyads and it was during this vital period that he would begin to work with orphaned children.

And it would be with them that he would discover one of his best known concepts: anaclytic depression. He would also analyze the effects of abandonment and emotional deprivation, as well as child development by analyzing object relations. During this period he would carry out numerous studies regarding child neurosis and development from a psychoanalytic and genetic psychology perspective (looking for the veracity of the data within his model). He also made numerous graphic reports, such as the one produced in 1952: “Psychogenic Disease in Early Childhood”.

In 1945 he would begin to publish in the magazine “The Psychoanalytic Study of the Child”, and a year later one of his great works would be published in which he explained the concept of anaclytic depression: the book Anaclitic Depression, The Psychoanalytic Study of the Child. Over the years he produced a large number of publications and works, in addition to continuing to teach at the university. Finally he was appointed president of the Denver Psychoanalytic Society in 1962 , a position he held until a year later.

Some of his best-known contributions

Among the author’s most representative works and concepts , the conception of analytical depression stands out , which is defined by the presence of irritability, asthenia, dependence, anguish, sleeping and eating problems, isolation and little attachment and problems on an intellectual, communicative and motor level. This symptomatology appears to be derived from the existence of a partial deprivation of affection during early childhood, and specifically during the first eighteen months, when the child has not been able to be close to the mother. His studies were carried out with children up to two years old.

Within this concept and further elaborating his theory he established the existence of three stages along this type of depression: the pre-objective phase, in which the smile appears as an organisational mechanism and there is no possibility of distinguishing between objects or of separating oneself from the rest, the phase of the precursor object in which it begins to be able to recognise the known and finally the phase of the real object in which a differentiation between mother and child and the anguish when it is gone begins to be understood , and in which anguish and the capacity to say no also appear.

We must also take into account the concept of hospitalism, which mainly refers to separation between mother and child for a prolonged period, in situations such as hospitalization.

His observations made him consider that the link with the mother is the origin and marks the whole of the social relations . He also worked on aspects such as the acquisition of identity. Another concept known to this author is that of marasmus, which refers to the emergence of pathology in children deprived of affection, which can generate a state of great loss of weight and appetite and which in many cases can lead to the death of the child.

Although he is not an author especially known by the majority of the population, his legacy still endures: he was the first to evaluate the existence of psychiatric-type psychic alterations in children , and specifically to show interest, analyze and assess the existence of clinical depression in minors. His works and those of Bowlby are complementary, helping to understand elements such as the attachment of minors. And the idea of anaclytic depression and reactions such as hospitalism and marasmus are an important contribution to science. In this sense, it also incorporates a certain rigour in the handling of information, obtained through processes that are more based on observation and less abstract than other psychoanalysts.