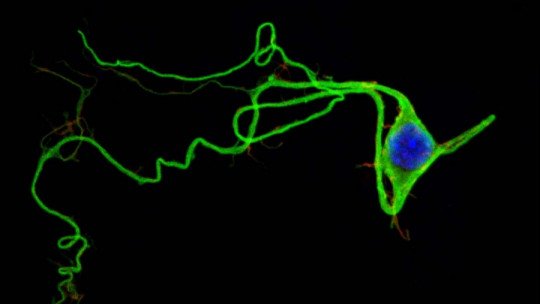 Neurons are the basic unit of our nervous system and, thanks to their work, it is possible to transmit the nerve impulse so that it reaches encephalic structures that allow us to think, remember, feel and much more.

But these neurons are not transmitting impulses all the time. There are times when they rest. It is during these moments that the resting membrane potential occurs, a phenomenon which we explain in more detail below.

What is membrane potential?

In order for two nerve cells to exchange information it is necessary for them to modify the voltage of their membranes , which will result in an action potential. In other words, the action potential is understood to be a series of changes in the membrane of the neuron axon, which is the elongated structure of the neurons that serves as a cable.

Changes in membrane voltage also imply changes in the physicochemical properties of this structure. This allows for changes in the permeability of the neuron, making it easier and more difficult for certain ions to enter and exit.

Membrane potential is defined as the electrical charge on the membrane of the nerve cells. It is the difference between the potential inside and outside the neuron .

What is resting membrane potential?

Resting membrane potential is a phenomenon that occurs when the nerve cell membrane is not altered by either excitatory or inhibitory action potentials. The neuron does not signal, i.e. it is not sending any signals to other nerve cells to which it is connected and is therefore in a resting state.

The resting potential is determined by the concentration gradients of the ions , both inside and outside the neuron, and by the permeability of the membrane when these same chemical elements are allowed to pass through or not.

When the neuron membrane is at rest, the inside of the cell has a more negative charge in relation to the outside. Normally, in this state, the membrane has a voltage close to -70 microvolts (mV). That is, the inside of the neuron is 70 mV less than the outside, although it should be mentioned that this voltage can vary between -30 mV and -90 mV. In addition, at this time there are more sodium (Na) ions outside the neuron and more potassium (K) ions inside it .

How does it occur in the neurons?

The nerve impulse is nothing more than the exchange of messages between neurons by electrochemical means. That is, when different chemicals enter and leave the neurons, altering the gradient of these ions in the environment inside and outside the nerve cells, electrical signals are produced . As ions are charged elements, changes in their concentration in these media also involve changes in the voltage of the neuronal membrane.

In the nervous system the main ions that can be found are Na and K, although calcium (Ca) and chlorine (Cl) are also highlighted. Na, K and Ca ions are positive, while Cl is negative. The nerve membrane is semi-permeable, allowing some ions to enter and exit selectively.

Both outside and inside the neuron, the ion concentrations try to balance out ; however, as mentioned above, the membrane makes it difficult, since it does not allow all the ions to go out or come in in the same way.

Although the main topic of this article is the concept of resting membrane potential, it is necessary to explain, very briefly, how changes in membrane potential occur while the neuron is resting. In order for the nerve impulse to be given, the resting potential must be altered. Two phenomena occur for the electrical signal to be transmitted: depolarization and hyperpolarization.

In the resting state, the inside of the neuron has an electrical charge with respect to the outside.

If in the resting state the cell is more negative than the outside and, when depolarized, it does not have a significant difference in load, in the case of hyperpolarization it happens that the cell has a more positive load than its outside.

When the neuron receives several stimuli that depolarize it, each of them causes the membrane potential to be changed progressively .

This phenomenon occurs for about two milliseconds . After this very short period of time, the membrane returns to its normal values. The rapid inversion in the membrane potential is, in itself, what is called action potential and is what causes the transmission of the nerve impulse, in the direction of the axon to the terminal button of the dendrites.