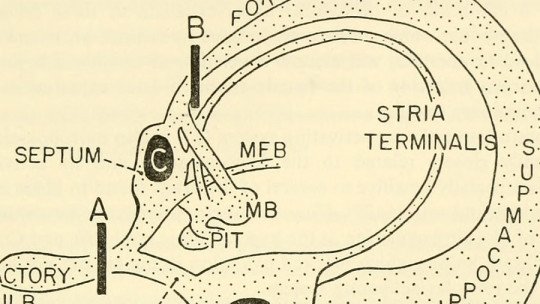 The functioning of the human brain is based on four main blocks: the neocortex, responsible for motor activity, planning or attention; the basal ganglia, responsible for controlling movement; the reticular formation, responsible for vital functions such as sleep, wakefulness or cardiovascular control; and the limbic system, formerly called the rhinencephalon , centre of emotional management and of the olfactory system.

Let’s see exactly what the rhinencephalon is, and what brain functions are attributed to it.

What is the rhinencephalon?

The rhinencephalon is currently known as the part of the brain related to smell and included within the limbic system or “emotional brain” .

With the increase in the differentiation of the other senses in the vertebrates, smell has been losing prominence. However, the fundamental connections of the olfactory mechanism with both visceral and somatic activities are as important in humans as in other mammals, even if the olfactory sensitivity is lower.

The rhinencephalon, being interconnected with the hypothalamus (centre in charge of homeostasis or organic balance) and with several areas of emotional control, helps us to concentrate all the information that comes from the outside and that we translate into processes through which we perceive, learn, act and remember.

We must not forget that the sense of smell is up to 10,000 times more sensitive than any other of our senses, and that the olfactory response is immediate and extends directly to the brain. It is also estimated that we have 100 million receptors for the olfactory sensation.

It is believed that **human beings can capture up to 7 primary odours: camphor, musk, flowers, mint, ether, pungent and rotten , odours that would correspond to the seven types of receptors existing in the olfactory mucosa. However, research data from recent years indicate that there are at least a hundred primary odour sensations.

Location in the brain

In humans, we can locate the rhinencephalon in the lower lateral part of the brain, just between the eyes, and above it is the frontal lobe .

In the upper portion of the nasal cavity there is a small area called the olfactory epithelium. This area contains between 10 and 100 million olfactory receptors, each of which is actually a neuron that possesses olfactory cilia sensitive to chemical stimuli from odorant substances.

These neurons emit extensions that meet in groups (called axons) and form two nerves known as olfactory nerves. These are directed towards the brain and end their journey in an area of grey substance called the olfactory bulb. The information will travel from the bulb, through the olfactory tract, to the primary olfactory area of the cerebral cortex .

It is in the cortex where we finally consciously perceive a certain smell, and from this brain area start the nerve pathways that communicate with other systems such as the limbic or hypothalamus, areas responsible for many of the emotional responses associated with odors or olfactory memories.

Parts of this nervous system structure

The bodies of these neurons emit extensions called axons that meet in groups and group together to form two nerves called olfactory nerves. These nerves approach the brain and end up in an accumulation of gray substance called the olfactory bulb.

The information captured passes through the bulb and reaches other structures in the limbic system, a network of structures connected to each other and located near the medial part of the brain. The main structures of this system, of which the rhinencephalon is a part, are the following :

This brain structure, located in the diencephalon, has a fundamental role in the regulation of vital functions such as body temperature, hunger and thirst, sexual impulses or the regulation of the state of mind.

It achieves this by acting as a bridge between the brain and the endocrine system , discharging torrents of hormones and playing a coordinating role for the autonomic nervous system.

It is a small curved and elongated structure, located in the inner part of the temporal lobe, very close to the thalamus and the tonsils. It is involved in the regulation of mental processes such as memory, memory retrieval, spatial location or orientation .

Although it was initially thought that this structure was directly involved in smell as a central component of the rhinencephalon, today its involvement in odour memory is more disputed.

The tonsils are located next to the hippocampus and therefore we have one in each brain hemisphere. Their function is related to the learned emotional response that elicits certain contexts and situations, and therefore also to emotional learning.

This structure is therefore one of the main nuclei of control of emotions such as fear or anger. Hence, it is an important structure to understand how smells can alter our mood , arousing emotions or evoking memories.

At the limits of the limbic system we can find the orbitofrontal cortex, the escape valve of the emotional orders towards frontal lobe areas in charge of strategy generation and planning.

Therefore, it has a very prominent role in placating the most primitive and “irrational” impulses that come directly from the limbic system and in filtering out some signals, letting only those that serve to achieve the objectives defined in the medium or long term goals pass through.

It is a small vesicular structure composed of a pair of protuberances located in the olfactory epithelium and below the frontal lobes . It is believed to be responsible for detecting, differentiating and amplifying odours and our sensitivity to them. This structure also stands out for being an area where adult neurogenesis exists, that is, the generation of new neurons throughout life.

In animals, it influences sexual behaviour, defensive and aggressive behaviour, as well as the care of offspring.

Our rhinencephalon converts chemical signals into perception and electrical impulses that travel through our brain in order to fulfill the following vital functions:

The olfactory system and memory

Another body structure to take into account when talking about the olfactory system, beyond the importance of the rhinencephalon, is one known by all of us: the nose, the olfactory organ par excellence. If it were not for it we would be unable to perceive the vast range of smells that our towns and cities emanate day and night. However, the processing of smells goes beyond this part of our body that is so visible .

The olfactory molecules that are dispersed in the environment come into contact with the nasal mucosa and reach the receptors of the olfactory epithelium. The receptor neurons send the information to the olfactory bulb by means of electrical impulses. And from there, to the limbic system, in charge of centrifuging our brain, stimulating our system of memories and associated emotions .

When we perceive a specific smell, we look for a relationship with a stored memory and if we don’t have it, we make it up. Depending on the type of memory evoked, the mood can be modified or remain the same . This is what happens when we evoke memories of our childhood, of nature, of the perfume of a person we met, etc.

All this, of course, occurs in our brain automatically and unconsciously, without the direct involvement of our conscious attention ; the rhinencephalon and other associated biological structures take care of it in a discreet way. In many cases, from that moment on, that particular smell or aroma will be the one that motivates our future actions and the one that generates our acceptance or rejection of the circumstances associated with it.