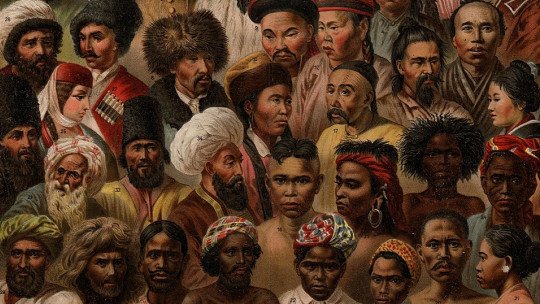 Since its beginnings, modern science has formulated different theories about the origin of human beings, as well as several explanations about what makes us different from each other. With the natural science paradigm dominating the production of scientific knowledge in the United States and Europe in the mid-19th century, such explanations were strongly focused on finding genetically and biologically predetermined differences within the same species.

This is how one of the theoretical models was generated that until recently dominated much of the scientific knowledge and had important repercussions in different spheres of social life: the polygenic theory of races . In this article we will see what this theory is about and what some of its consequences have been in everyday life.

What does the polygenic theory of race postulate?

The polygenist theory of races, also known as polygenism, postulates that since our origins, human beings have been genetically differentiated into different races (biologically determined subdivisions within our own species).

These subdivisions would have been created separately, so that each would have fixed differences from its origin. In this sense, is a theory opposed to monogenism , which postulates a unique origin or race for the human species.

The origins of polygenism and intellectual differences

The greatest exponent of polygenism was the American doctor Samuel George Morton (1799-1851), who postulated that, as was the case with the animal kingdom, the human race could be divided into subspecies which were later called “races” .

These races would have constituted humans from their origin, and as it is a differential condition biologically pre-established, also the study of the anatomical characteristics of each subspecies could give account of other intrinsic characteristics, for example, of the intellectual capacities.

Thus, on par with the rise of phrenology as an explanation of personality, Morton argued that the size of the skull could indicate different types or levels of intelligence for each race. He studied the skulls of different people around the world, including both native Americans, Africans and white Caucasians.

From monogenism to polygenic theory

After having analyzed these bone structures, Morton concluded that blacks and whites were already different from their origins , more than three centuries before these theories. This was a theory that was contrary to what was accepted at that time, and that lay between biologicism and Christianity, a theory based on the fact that the entire human species had derived from the same point: the sons of Noah who, according to the biblical account, had arrived only a thousand years before this time.

Morton, still reluctant to contradict this account, but later supported by other scientists of the time such as the surgeon Josiah C. Nott and the Egyptologist George Gliddon, concluded that there were racial differences intrinsic to human biology, and that these differences had been present from the beginning. The latter was called polygenism or polygenist theory of race.

After affirming that each race had a different origin, Morton postulated that intellectual capacities followed a descending order and differentiated according to the species. Thus, he placed Caucasian whites at the top of the hierarchy, and blacks at the bottom, including other groups in between.

This theory had its heyday a few years before the Civil War, which lasted from 1861 to 1865 and was partly the result of the history of slavery in the United States. The theory of intellectual differences by race, with Caucasian whites at the top and blacks at the bottom , was quickly used by those who justified and defended slavery .

The results of their research did not only allude to intellectual differences. They also referred to aesthetic characteristics and personality traits, which are more highly valued in Caucasian whites than in other groups. The latter impacted both the beginnings of the Civil War and the social imaginary of racial superiority/inferiority itself. It also had an impact on later scientific research, and on policies of access to different spaces of public life.

This is why Morton and his theories are recognized as the beginnings of scientific racism, which consists of using scientific theories to legitimize racist practices of discrimination ; which also includes that the scientific theories and research itself are often traversed by important racial biases; as occurred with the postulates of Samuel G. Morton and other doctors of the time.

In other words, the polygenic theory of race is proof of the two processes that make up scientific racism. On the one hand, it exemplifies how scientific research can easily be instrumentalized to legitimize and reproduce stereotypes and conditions of inequality, discrimination or violence towards minorities, in this case racialized. And on the other hand, they are an example of how scientific production is not necessarily neutral, but can hide racist biases that, for the same reason, make it easily instrumentalized.

From the concept of “race” to “racialized groups”

As a consequence of this, and also as a result of science constantly expanding and questioning both its paradigms and its criteria of validity and reliability, Morton’s theories are currently being discredited. Today the scientific community agrees that it is not possible to scientifically sustain the concept of “race” .

Genetics itself has rejected that possibility. Since the beginning of this century, research has shown that the concept of race has no genetic basis, and so its scientific basis has been denied.

In any case, it is more convenient to speak of racialized groups, since although races do not exist, what does exist is a constant process of racialization; which consists of legitimizing the structural and daily conditions of inequality towards groups that, due to their phenotypical and/or cultural characteristics, are attributed certain socially devalued abilities or values.