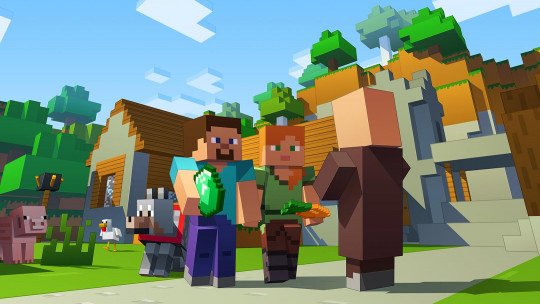 Video games sandboxes like the well-known Minecraft have not only been a real phenomenon in the world of youtubers : they also have an important educational potential.

In this article we will explore the wide range of pedagogical possibilities they present.

The precedents: games in real environments

It is known that play has been part of human civilisation since its most remote origins and in all cultures and societies (Gértrudix Barrio and Gértrudix Barrio, 2013), forming an element of interactivity between young people and adults, through which they have been educated and have learned.

Throughout the centuries, the game has been changing at the same time as all the diverse cultures and societies have been changing , adapting to the material and cultural characteristics of these and adopting very heterogeneous modalities and types among them.

To give an illustrative example, some decades ago, a large number of older people were raised in a rural environment where games involved grazing animals, such as cows or sheep, as they often had virtually no objects to play with other than common objects, animals and imagination. With the passing of the years and the arrival of industrialization and mass production, young people moved from playing with common objects to playing with dolls and toys, which later introduced small electronic elements that produced sounds or small movements.

Today, thanks to the strong development of new information and communication technologies (hereinafter referred to as ICT), the methods and tools of play have evolved to adapt to this new era, as they have done over the past centuries. This means that the human being evolves and all the elements that surround him also evolve ; therefore, we must understand that the young people of this new era are used to living and growing up habitually using ICT.

The arrival of the educational video game

A basic element of play for today’s young people is video games. Just as in traditional game modes, we can also educate them through this new tool (which is increasingly followed and used), as well as promoting the autonomous teaching of very varied and sometimes complex contents .

Within the wide range of video game genres, all of which can offer us different ways of learning and enhancing cognitive skills, there is one genre that stands out among all others due to the countless possibilities it can offer: video games of the sandbox type .

This genre of video games is known for offering its players an open world with great possibilities for modifying and creating the environment, as well as following a non-linear storyline, where the objectives are often set by the player himself, thus giving him the opportunity to boost his creativity, encouraging self-telling and the construction of stories and experiences. If we add to this cocktail the social part that they usually include, this type of video game becomes a great tool to promote learning , creativity and, of course, fun.

You set the limits yourself

Under this new perspective provided by this genre of video game where the limits are set by the user’s imagination, new possible applications of these games in education and teaching arise both outside and inside the classroom, thus giving rise to experiments carried out by communities of educators who use a video game of the sandbox genre, called Minecraft, in schools, to carry out and demonstrate the benefits generated by the use of these applications.

A good example of the use of Minecraft in the classroom is the one carried out by Sarah Kaviar, who in 2013 gave a conference at the Progressive Education Network where she showed a project she is carrying out with her students in the humanities. In it, she used this video game to recreate places of worship in the world and then made several games in which they demonstrate their knowledge of those places, giving very satisfactory results in terms of student learning.

The impact of this sandbox video game is such that there is a large community, both in Spain and abroad, that is dedicated to studying and implementing Minecraft in the classroom to encourage the involvement of students in learning certain content and in promoting creativity and autonomous learning.

As a result of the study of the use of video games for these purposes, the term edutainment (Gértrudix Barrio and Gértrudix Barrio, 2013) was born, the result of the union of the word “education” and “entertainment”, on which several investigations have emerged that have shown the great results obtained with the educational use of digital immersive environments, i.e. sandbox-type video games, which in the words of Sorathia and Servidio (2012): “offer a place for the empirical application of constructivist theory”.

Among the results of this research, the quality of the learning process stands out , since it allows students to acquire different perspectives of the phenomena and experience multiple situations in which they acquire knowledge easily transferable to real life (Aldrich, 2009), (Dede, 2009), (Kapp and O’Driscoll, 2010). These teaching applications are possible thanks to the non-linearity of this genre of video games, which makes it easier for the teacher or trainer to customize and shape the objectives of the game in order to produce a learning and fun experience for students.

Despite the possible uses that teachers can and are making in many areas of the world, the educational applications of sandbox-type video games like Minecraft are not limited solely to the classroom environment under adult supervision. In fact, the simple and apparent playful use of these video games has a strong educational potential in young people , since in most cases, the content of these video games and the possibilities they offer are usually very applicable to real life, so that what at first sight may seem like a simple game, can become a surprisingly educational experience.

Furthermore, both directly and indirectly, the player will be forced to use his imagination and therefore to train his capacity for creativity , which should be a top priority in compulsory education.

Another great advantage of using sandbox video games is that the vast majority of them are usually accompanied by a large community of online players who promote, through complex codes of conduct, prosocial activity and a sense of inclusion regardless of the socio-economic differences of the players; so that they end up being, to use the expression: “simulators of good citizenship”, providing an extra value to the educational experience resulting from their use.