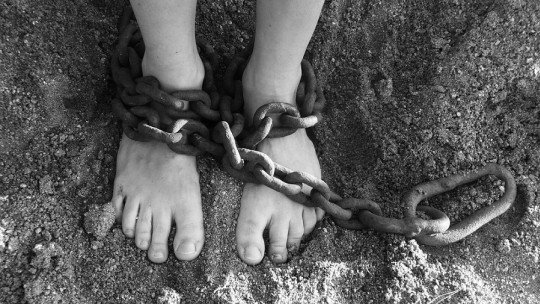 The main problem of the slave is not in itself the various calamities he has to endure day after day because of his condition as a slave (…) but rather it is the matrix of thought that does not allow him to question his slavery. […]

Satisfied slave syndrome is not a term included in the DSM or in any other psychiatric diagnostic manual.

By this new concept I mean the set of symptoms presented by some people who, despite living an objectively miserable life, seem not only resigned but grateful for their existence. In this article I will try to explain some assumptions in which this defense mechanism is produced, its causes and its social and cultural context.

In the yes of a given society, we could consider the following: what is the worst thing that can happen to a slave?

One could answer that, without a doubt, the worst thing about the life of a slave is, of course, the constant humiliation and degrading treatment that comes with being a slave. However, there would be another possible answer: the worst thing that can happen to a slave is to feel satisfied and even grateful for the life he has had to live and for the treatment he receives.

A society of adapted neurotics

This paradoxical satisfaction, typical of the adapted neurotic, does not reflect on the future and reduces the complexity of life to the immediate satisfaction of the daily routine. Although many see this philosophy of life of carpe diem as a laudable example of adaptation and optimism, the truth is that it is one more form of self-deception . The cognitive trap lies in the fact that the satisfied slave progressively increases his resigned acceptance of his slave condition ; a condition that, based on hic et nunc , ends up going unnoticed by the individual himself.

What defines a slave is not his physical ties and his lack of freedom of movement without the express authorization of his master. He is not even defined by the lashes he receives.

Assuming the ideology of power

The problem of the slave who is satisfied with the blows and lashes is not the physical pain they cause him, but the psychological predisposition to receive them and to naturalize the fierceness of the powerful over him.

Consequently, the misfortune of the slave is not so much the situational forms that he suffers in his daily life in terms of physical abuse, but rather the assumption of the thought of the powerful , which prevents him from considering and therefore questioning his state of submission. This implies that he accepts the conditions of life uncritically, with a resigned passivity and without a glimmer of determination to be able to reverse his life. If we also add a perception of satisfaction for the treatment offered to him as a slave, the individual is condemned to live a miserable life. In this case, the chains do not hold the body, but the mind .

The satisfied slave in today’s society

It is true that, in today’s societies, the struggles for social and civil rights have been cementing some laws that protect us from such blatant abuses as chain and whip slavery. However, we still carry some vestiges of the slave system.

The current socioeconomic and cultural system imposes certain values on us and exercises a continuous manipulation on the way we think , leading to the acceptance of some practices that clash with the basic right to think critically and autonomously.

Modern slavery consists of attending to a series of family, work and social routines without prior reflection. In this frenetic day-to-day life, our capacity to take the initiative in the face of extremely important questions such as consumption (what we buy and for what), fashion (very much related to the image of ourselves that we want to project to the world) and morality (those reflections that should guide our acts towards concrete ends) are cancelled out.

Between acriticism, passivity and carpe diem misunderstanding, our mind stops thinking about certain things, which in the end means a passive resignation to the vicissitudes of life. In this way, just as a slave would act, and because of the learned helplessness implied by the lack of confidence in our possibilities, we end up being mere spectators of a status quo that we believe to be ubiquitous and, therefore, by itself legitimate .

As Alvaro Saval wrote in his article “Depressed youth or anesthetized youth”, the manipulation of our thoughts is shaping a culture that is fertile for power: ties us to prejudices, slogans and stereotypes that paralyze young people in a present without hope .

Although the 15-M movement awakened a large part of these young people who were anaesthetised under the yoke of the uniform thinking of the technocracy and presentism, the other half still inhabit a scenario in which uniformity of thought, precarious jobs and moments of leisure follow an identical pattern.

Without critical thinking there is no freedom

In these circles, any hint of independent thought or criticism of certain customs is vilified and systematically excluded . Thus, the fear of thinking for oneself and self-censorship are the obstacles to escape from the chains and lashes in modern slavery. Of course, the system makes good use of this type of thinking, supporting highly obedient individuals: precarious but productive workers, consumers without criteria and, of course, not at all critical of society or the injustices they suffer even without realizing it.

Adolescence is not only the stage when our personality is consolidated, but also is the time when our thoughts are structured and certain guidelines are drawn for our perception of the world around us . The influence of the group on the adolescent is always a relevant factor when presuming the influence on uniform thinking or, on the contrary, on critical thinking.

Without a critical culture, individuals are unable to think about reality for themselves. In this sense, existence ceases to be a journey in search of good, truth and happiness , to become an unreasonable one of mirages and stereotypes whose appearance is based on the welfare provided by an imposed and assimilated thought: all because we do not have the courage to overcome the chains of the slave in time.