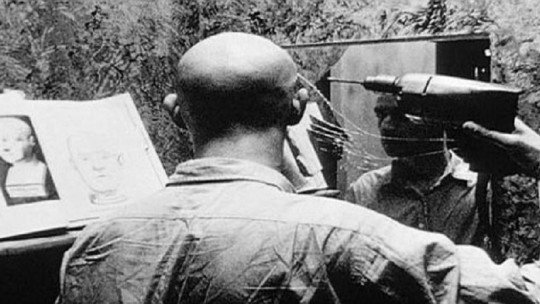 In 1967 Joe Mellen, a 30-year-old British citizen, tried to pierce his skull with a hand drill (similar to a corkscrew) while he was high on acid. After failing on his first attempt, he repeated the procedure the following year with the same result. Finally, in 1970 he managed to drill a hole in the upper forehead area with an electric drill. But the story does not end there.

In the same year, his wife, artist Amanda Feilding (27), also had her skull drilled, she did it with an electric dentist’s lathe. The procedure was recorded by Mellen, resulting in what is now considered a cult video. “Heartbeat in the brain,” as the tape is called, can be seen on Youtube and is not for the faint-hearted. The reason is the supposed potential that this absurd practice has to do with the will to “expand the mind” , in the same way that one usually experiments with certain types of drugs.

This story is one of many examples of the extent to which magical thinking, irrational experimentation and the desire to go through supposedly cathartic experiences can lead to defending a philosophy of life based on a mixture of suggestion and the risk of dying in strange circumstances.

The origin of the story: Bart Huges

Both were influenced by the Dutch doctor Bart Huges, an expert in psychoactive substances (mainly LSD), who in 1962 had stated that the volume of blood in the brain conditions a person’s state of consciousness. According to Huges’ theory, the adoption of the upright posture in the evolution of hominids had a negative impact at the cognitive and even physiological level : when walking upright, the human heart has to deal with the force of gravity to bring blood upwards, towards the brain, which eventually resulted in a reduction of blood flow in the brain mass. Or so Huges thought.

It is for this first reason that Huges advocated trepanation: drilling holes in the skull (without going through the meninges) to supposedly increase the amount of blood remaining in the brain. The second reason is the sealing of the skull that takes place in humans between the ages of 18 and 21. According to the author, before this period the infant skull is only partially closed, thus favouring a greater blood supply to the brain, and the greater irrigation would favour a greater awareness and creativity in the individual by making the brain work better.

What summarizes Huges’ theory is the concept of Ego, which for him was the system that distributed blood throughout the body. Blood is not sent in a uniform way , and from his point of view the fact that the part of the brain that receives more blood is the area of speech and abstract thought makes other regions of the brain receive less.

This has to do with the fact that evolutionarily speech is the part that has monopolized the most recent development of the brain in evolutionary terms. Always according to the author, making a hole in the skull would allow for a greater flow and a more balanced and homogeneous irrigation throughout the brain.

The cases of Mellen and Feilding

Back to our story: Joe Mellen met Bart Huges in 1965 in Ibiza, in the midst of the vortex of the Beat movement and the beginnings of acid consumption. At that time, Dr. Huges had already climbed his skull himself. When Mellen learned of his ideas, he was experimenting with LSD and other potent drugs .

When Amanda Feilding met Dr. Huges, she came from studying the religions of different countries and historical periods, as well as the mysticisms and initiation rites of various cultures. It was not until 5 years later that the members of the couple decided to practice trepanation, thus mixing the will to live new altered states of consciousness, and a fascination for ritual moments.

Both Amanda Feilding and Joe Mellen come from well-to-do English families. Feilding was born into a family of English aristocrats and Mellen studied at Oxford and left his postgraduate studies (and practically resolved life) to dedicate himself to living a life free of many of the responsibilities typical of Western adults .

When asked about their experience in interviews in 1970, they both agreed that it was a successful operation; Amanda reports that the whole process took no more than half an hour. When the work was done, she wrapped a scarf around her head, ate a steak to recover the lost iron, and went off to party. Literally.

It is precisely Amanda who describes in greater detail what one experiences when one’s skull is perforated: just as she finished having the hole made, she experienced it as “the arrival of a tide”. She said she noticed a feeling of growth, slow and smooth.

Joe’s experience was somewhat more accidental because during the procedure his drill wire broke and he had to go down to have it fixed with a towel on his head. In the course of a few hours, after having finished, he was overcome by a feeling, according to him, of lightness. He recounts it all in his book of memoirs, Bore Hole .

In several interviews, both agree that the final objective of trepanation is to open the brain “to the heartbeat” , heartbeat, which is what they say the brain is deprived of by the sealing of the skull in adolescence.

How do they live now?

Feilding currently runs an art gallery in London and is also director of the Beckley Foundation, a think tank dedicated to the study of consciousness and all those tools to alter it, both psychoactive substances and meditation, among others. The study of physical mechanisms to achieve altered states of consciousness, in short.

Joe Mellen gives conferences in which he provides the testimony of his youth, collected in Bore Hole , recently updated. This book is a true plea in favour of the use of psychoactives and the practice of trepanation . Despite the fact that both Feilding and Mellen are openly defenders of this practice, they strongly recommend that no one should perform this operation on their own. Feilding herself ran for election to the British Parliament with a promise to guarantee free trepanning for social security in her programme. This is no joke.

What we can learn from all this

Those who defend trepanation as something recommendable argue that it is a practice that has been done since the dawn of civilization and that therefore it must be beneficial. Experts on the subject place the beginnings of this operation in 5000 BC and even earlier, and there is archaeological evidence that it was a fairly common practice since the Neolithic period.
It goes without saying that this argument has little ground to make since there are much older traditions such as stoning, animal abuse or domestic violence that do not need to be maintained. The classic argument of “we must continue to do so because we have always done so” is dismissed out of hand.

With regard to the improvement of health that it may have, the liberation of the mind and consciousness, it should be remembered that not a single verifiable evidence has been found in any scientific study that supports this thesis and that modern neurology affirms that this operation has no medical basis, in addition to being evidently a very dangerous practice, and potentially painful or even fatal , especially taking into account that people who practice self-repanation do not do so for medical purposes.

Suggestion, the fact that thinking that climbing makes you change the way you experience things effectively makes you feel different (at best, just that), acts as a motor for a series of totally irrational beliefs. This is why it is important not to engage in practices that are contraindicated by medicine with regard to such an important set of organs as the brain.