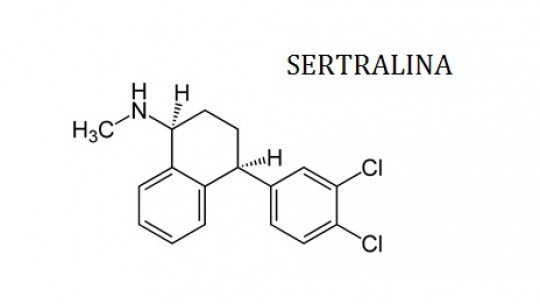 sertraline is one of the substances that can be used for the treatment of major depressive disorders, and belongs to the group of antidepressant psychodrugs.

It was first marketed in 1991 by Pfizer under the trade name “Zoloft”, and can also be purchased as Besitran , Ariale or Ertex , among other names. Let us see what the characteristics of this substance are and in which cases it is indicated .

The psychopharmaceutical known as sertraline is an antidepressant that belongs to the category of selective serotonin reuptake inhibitors (SSRIs), which means that once it has been introduced into the body and has begun to act on the nervous system, it selectively inhibits the reuptake of serotonin, thus increasing the availability of this neurotransmitter.

That is, since sertraline causes certain neurons to stop capturing the serotonin in the synaptic spaces, others can receive it, which is very useful in disorders associated with lower-than-normal serotonin levels in certain parts of the brain. Its use can make the little serotonin produced by the body better utilized, thus helping to correct an imbalance in the levels of this neurotransmitter and mitigate the symptoms of some mental disorders.

The half-life of sertraline within the body is 22 to 36 hours, so its effect is likely to be prolonged. However, the amount of serotonin available is not the same during that time, and the time when there is a greater amount of this psychotropic drug is between 4 and 8 hours after the dose has been consumed. Before that, sertraline remains in the digestive tract or metabolizing in order to pass into the blood.

What kind of disorders is it used for?

As mentioned, sertraline is widely used to treat depression. However, it is also used to intervene in cases of post-traumatic stress disorder (PTSD), obsessive-compulsive disorder (OCD), social phobia and panic attacks. It is believed that in all of them the lack of serotonin plays an important role, and that is why sertraline is used.

In turn, the amount of sertraline that should be consumed in each dose and the frequency of the latter depends on each case and it is the doctor who decides. The effects of this psychotropic drug depend largely on its amount and how often it is taken .

The positive effects of sertraline can be noticed from the first day or after a few weeks, depending on the characteristics of each person and the way in which it is consumed.

Side effects of sertraline

Sertraline does not generate dependency, but, as always happens with drugs, it has side effects . That is, sertraline produces reactions (more or less notable) in other processes that are not directly related to its objective. In the end, drugs are not intelligent agents that know where they have to act and where not; they simply circulate through the blood, making all those cells that can interact with them react.

In the case of sertraline, the side effects that it can produce include some of the most frequent in the intake of substances, such as nausea and headache, insomnia or drowsiness, or digestive problems , and others less frequent, such as episodes of anorexia and reduced libido.

It should be borne in mind that not all people need to manifest any of these side effects, but in any case the consumption of sertraline must always be indicated and supervised by doctors.

Sertraline is a psychotropic drug that must be taken after a doctor’s prescription and following his instructions.

It is not only necessary to be careful with its use because of the side effects it may have, but also because of the cases in which its ingestion is contraindicated, since it may create an adverse reaction due to its interaction with certain substances or with organs affected by alterations.

In addition, if the adverse effects are too severe, this has to be reported to the doctor so that he can prescribe another drug or look for alternative forms of intervention.