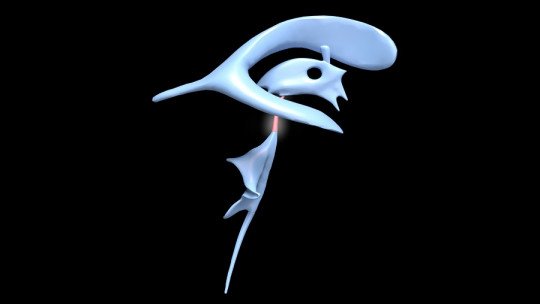 Silvio’s aqueduct is a conduit or channel located in a structure of our brain called the midbrain and whose function is to transport, from one ventricle to another, the cerebrospinal fluid, which acts as a shock absorber and protects us from blows to the head, among other relevant functions for our body.

In this article we explain what Silvio’s aqueduct is, what its characteristics are, where it is located, what functions it performs, how it develops and what are the main disorders associated with a malfunctioning of this brain structure.

What is Silvio’s aqueduct?

In neuroanatomy, it is known as the Silvio aqueduct, cerebral aqueduct or mesencephalic aqueduct to the duct located in the midbrain which is responsible for connecting the third and fourth ventricles of the brain, and through which the cerebrospinal fluid (CSF) permeates the brain and spinal cord.

The CSF is a liquid substance that fulfills basic functions in our nervous system, among which the following stand out: acting as a protector against cranioencephalic trauma; providing hydro-pneumatic support; eliminating residual metabolites from the nervous system; and acting as a homeostatic mechanism when certain hormonal imbalances occur in the body.

Silvio’s aqueduct is located within the midbrain, one of the parts that make up the brain stem. This brain structure is located over the protrusion or Varolio bridge and below the diencephalon (composed of the thalamus and hypothalamus, among other structures), and is integrated by the tectum (or roof), located in the dorsal part; and the tegmentum (or integument), located just below the tectum.

The midbrain or midbrain is made up of several neural nuclei : the periaqueductal gray substance, involved in the processing of pain or threatening stimuli; the red nucleus, which controls various motor processes; and the substantia nigra, a component of the basal nuclei whose functions are related to motor control, learning and reward mechanisms.

Silvio’s aqueduct, as we mentioned at the beginning of the article, is a channel that communicates the third and fourth ventricles, in a system of four cavities or ventricles. The two lateral ventricles are located along the cerebral hemispheres and connect to the third ventricle through the ventricular foramen or Monro.

As for the third ventricle, it should be noted that it is a cavity located in the midline of the brain and is bounded on each side by the thalamus and hypothalamus. In its frontal part it communicates, as we have mentioned, with the lateral ventricles and, in its posterior part, with the Silvio aqueduct.

On the other hand, the fourth ventricle is the one located at the lowest level of the four cerebral ventricles . It extends from Silvio’s aqueduct to the central channel at the upper end of the spinal cord, with which it communicates through several orifices: the Luschka holes, located on the sides; and the Magendie hole, located in the centre and between the two Luschka holes.

The Silvio Aqueduct, as its name indicates, is a channel or irrigation system of cerebrospinal fluid that connects the third and fourth ventricles , and that, together with the lateral ventricles, constitute the ventricular system that protects the brain, among other functions.

The development of the ventricular system occurs parallel to the rest of the central nervous system. The cerebral ventricles are derived from the embryonic neuroepithelium. The ventricles, Silvio’s aqueduct and the central spinal cord canal are all lined with an epithelial layer of cubic and cylindrical cells, called ependymaries.

From the fifth week of embryonic development, the brain vesicles are differentiated into: telencephalon, diencephalon, midbrain, metencephalon and myelinebrain. These vesicles are hollow inside and maintain their cavities until their development is complete in adulthood: what we know as cerebral ventricles.

In week six, the division of the brain vesicles is clearer; the prosencephalon has already been differentiated into telencephalon and diencephalon. The midbrain, on the other hand, has not been divided and its largest cavity progressively narrows in the first stages, while the Silvio’s aqueduct is formed, which communicates the third with the fourth ventricle.

The midbrain is the structure that undergoes the fewest changes during development, except for the most caudal part. Finally, the length of Silvio’s aqueduct is approximately 18 millimeters.

Hydrocephalias are a group of diseases caused by an increase in the cerebrospinal fluid (CSF) inside the cranial cavity. Its incidence is 1 or 2 cases per 1000 births and it occurs more frequently due to congenital than acquired causes. In cases where congenital hydrocephalus occurs, teratogenic factors, malnutrition, toxins, etc. may play a role.

There are three main types of hydrocephalus: communicating or non-obstructive, which originate when CSF absorption is inadequate; non-communicating or obstructive, which occur when CSF flow is blocked in one or more of the channels connecting the ventricles to each other; and normotensive, in which an increase in CSF in the ventricles is generated, with a slight increase in intracranial pressure.

One of the most common disorders related to the damage or obstruction of Silvio’s aqueduct is known as hydrocephalus due to congenital stenosis of the aqueduct (HSAS) . This disease, associated with a phenotype that is part of the clinical spectrum of X-linked L1 syndrome, causes severe obstructive hydrocephalus, usually beginning in the womb, which produces signs of intracranial hypertension, thumb abduction, symptoms of spasticity and severe intellectual deficit.

In children, one of the most typical symptoms involves a rapid increase in the circumference or size of the head. Other autonomic or somatic symptoms may also occur and may include vomiting, irritability, sleepiness, and seizures.

Although the consequences of hydrocephalus vary from patient to patient depending on age, disease progression and individual differences in CSF tolerance, it should be noted that hydrocephalus due to Silvio’s aqueduct stenosis represents the most severe end of the spectrum and has a poor prognosis.