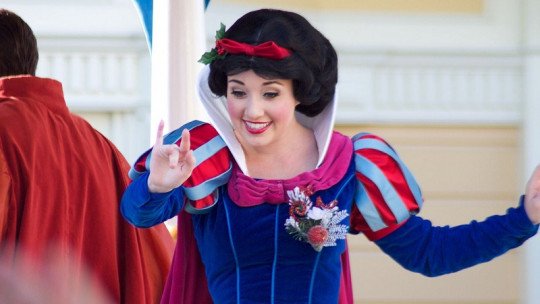 We live in a society where one of the most valued attributes is physical appearance . Many women (and also some men) are not able to accept the appearance of the first wrinkles, and try to hide their age.

With the passing of time, age leaves its mark , and unhappiness becomes greater and greater for them, as they cannot bear to see their physical appearance change. After 40, they leave behind the beauty characteristic of their youth and frustration and anxiety appear.

The Blancanienves Syndrome: what is it?

In our article “The Peter Pan and Wendy Syndrome: Caught in Neverland” we talk about two disorders that have their origin in two characters from Disney . In this article, we will discuss the characteristics of Snow White Syndrome .

Snow White Syndrome refers to the distortion of the image a person has of himself or herself with respect to his or her youth, beauty or qualities characteristic of this stage of life, and the envy the person feels towards younger people and considers them to be more attractive.

Betsy Cohen, an American psychotherapist, coined the term in one of her books. Although this disorder is not part of the DSM-5 ( Diagnostic and Statistical Manual of Mental Disorders ), psychologists are increasingly paying attention to its symptoms, which often appear in many women over the age of 40.

Although this syndrome is more common in women, some cases have also been reported in men.

The name of this syndrome is inspired by Queen Grimhilde , the evil stepmother of Snow White. She can’t stand that there is anyone else prettier than her, and she is very envious of the young and beautiful Snow White. The wicked and vain stepmother asks Humbert, a hunter, to end the life of her stepdaughter and bring her heart to him.

Since Humbert refuses to kill her, Queen Grimhilde disguises herself as an old woman and goes in search of Snow White, to kill her herself with a poisoned apple. The envy that Queen Grimahalde feels, makes her not only want to kill an enemy, but her goal is to end the life of a relative.

The person who suffers from this disorder, just like the Disney character, feels insecure about his own image and is afraid of old age, of not being looked at as before, and does not accept the physical consequences of the passing of the years. This insecurity causes him to feel envious of young and attractive people and can go so far as to attack emotionally (in some cases physically), with constant humiliation, the person who is the object of his envy.

Some consequences of the low tolerance to aging, make you a person obsessed with your physical image, may come to cosmetic surgery to continue looking young. Despite her age, wants to continue being a “twenty year old” and dresses as if she were still in her early twenties . In addition, she tries to have many relationships with men to feel young, beautiful and desired.

The following are the most common symptoms of a person suffering from Snow White Syndrome:

How to overcome Snow White Syndrome?

The irrational beliefs due to the social pressure these people feel may cause these women (and some men) to need psychological help. To get out of this situation, it is necessary to work on self-knowledge, self-acceptance and improvement of self-concept in order to reduce anxious symptoms . Changing dysfunctional beliefs is necessary to recover well-being and reduce frustration.

Cognitive Behavioral Therapy, Acceptance and Commitment Therapy, Mindfulness, or Emotional Intelligence can be effective forms of therapy for the treatment of this syndrome.