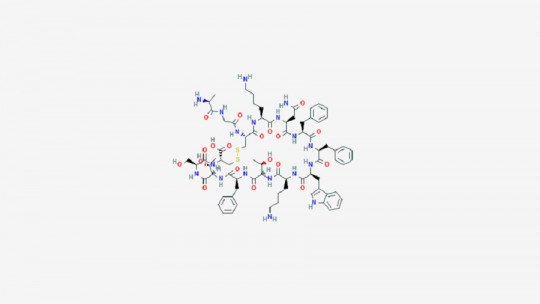 Within the human body we can find a great amount and variety of structures and organs that have different properties and functions. The main system in charge of this is the nervous system, but we must also highlight the important role of the endocrine system .

In this sense, a large part of our body’s functions depend on certain hormones altering or regulating the functioning of the organs, glands and tissues that are part of it. And one of them is somatostatin , which we will talk about throughout this article.

Somatostatin: what is it?

Somatostatin is one of the different hormones that our body secretes naturally, which like the rest of the hormones acts as a messenger that generates some kind of alteration in the functioning or structure of other body systems.

This is a protein type substance that can be synthesized in two different forms, one of twenty-eight amino acids (with a greater presence in the digestive tract) and another (the most common in the nervous system and pancreas, and the best known) formed by a total of fourteen amino acids, and which has an effect on different body systems such as the nervous, endocrine or even the digestive or excretory systems. It also acts as a neurotransmitter .

Somatostatin is a fundamentally inhibitory hormone, and its synthesis takes place in the pancreas. It is produced mainly in the islets of Langerhans as well as insulin and glucagon, specifically by the delta cells of these structures. However, we can also find other areas that synthesize and use it, among which the hypothalamus and other brain nuclei or even the walls of the gastrointestinal tract stand out.

Main functions of this hormone

Somatostatin is a hormone that can be found in most systems of our body, and has different effects on it. As we have seen above, plays a mainly inhibitory role in most target organs .

One of the functions or properties for which it is best known is its role as an inhibitor of growth hormone, something that allows it to slow down to a great extent in adulthood and contribute to the regeneration capacity of our body by reducing the energy expenditure dedicated to growth. To do this, it acts on the pituitary gland in such a way that it reduces the production of growth hormone or somatotropin. In fact, this function has earned it the name of somatotropin release inhibiting hormone.

It also affects the release of other hormones, such as ACTH, which allows our adrenal glands to produce steroids. It also affects and inhibits the functioning and synthesis of thyroid hormones , suppressing their releasing factor in the pituitary gland. In addition, at the pancreatic level, somatostatin generates the inhibition of the release of insulin and glucagon, something which allows the control of the emission of these hormones and which can lead to an increase in blood glucose.

In the digestive tract it inhibits and reduces intestinal motility and enzyme secretion, as well as the absorption of glucose and other nutrients. It also has an effect on the excretory system, reducing urination. Another effect is to reduce blood flow at the splenic or visceral level, as well as salivation or intestinal mucous.

It also has an effect on the immune system , as well as the cardiovascular system. In the nervous system it inhibits the functioning of part of the central system, as well as the autonomic system (in fact it reduces and makes movement difficult, as it has an effect on the extrapyramidal system). It also inhibits the release of monoamines such as noradrenaline and dopamine.

Somatostatin is, as we have said, a hormone present in our body, which originates mainly in the pancreas. However, some people may have some kind of deficit in its synthesis or find themselves in a medical situation that may benefit from its external administration. Because of its effects on the body, somatostatin has also been synthesized in the laboratory to treat various conditions.

The synthetic somatostatin used as a medicine is analogous to and has the same chemical composition as that made by our body, and is applicable by infusion into the blood, by perfusion. It usually comes in the form of vials with lyophilized powder and ampoules with a solvent (usually sodium chloride) that allows its dissolution. The dose in question will depend on various factors such as age or the presence of pathologies.

The use of this hormone is indicated for the treatment of internal bleeding , especially with regard to injuries or ruptures of varicose veins and fistulas in areas such as the esophagus or pancreas, or in the digestive tract.

The reason for this is that as we mentioned above somatostatin inhibits not only hormones but also decreases secretions from the digestive organs, intestinal motility and blood flow in the viscera. However, its use is only to complement other treatments, and other types of interventions are needed to achieve clinical improvement.

In addition, is the treatment of choice for acromegaly or gigantism due to its inhibition of growth hormone and pituitary activity. Another clinical application of this hormone is in pancreatic or gastric tumors, although in this case it acts more as a marker and as a vehicle for radioactive molecules that can fight the neoplasm, as well as in some of the pituitary gland being an inhibitor of its activity.

Risks and side effects of medical use

Somatostatin is a very useful hormone both naturally and in clinical application. However, in the second case we may find that its use as a drug involves some risks. Sometimes it is contraindicated or, it is necessary to use smaller doses than usual.

Possible side effects include hyperglycemia, dizziness and hot flushes, abdominal pain and nausea . Episodes of diarrhoea, hypoglycaemia, bradycardia and both hiccups and hypertension may also occur. Finally, there is a risk of arrhythmias, blockages and heart problems.

It also decreases urine flow and blood sodium, as well as glomerular filtration , which can be negative in people with severe kidney problems. Special attention should be paid to the presence of cardiac alterations in the first moments of the treatment, including monitoring of vital signs.

As for populations that should not take this drug, somatostatin is contraindicated in pregnant women or during childbirth or breastfeeding (which should be discontinued if treatment with this drug is essential) because it affects growth hormone and this can cause alterations in the fetus or baby. Its use is not recommended for children or adolescents.

It should also not be mixed with other drugs unless your doctor tells you to, especially in the case of anti-anxiety drugs (which are potent). Obviously, this drug should not be taken by those who are allergic to somatostatin or any of the components of its preparation.

People with severe kidney failure , although they can be treated with this drug, should do so with lower doses. Since it blocks the release of insulin and glucagon and the risk of it generating hyperglycemia, its pharmacological use should be especially controlled in people with diabetes, especially if they are insulin-dependent or type 1 (insulin may need to be administered).