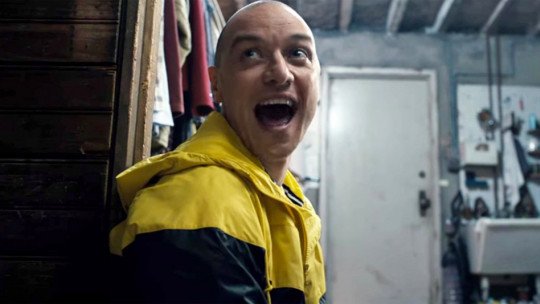 Multiple personality or dissociative identity disorder (DID) has been treated in fiction on a recurring basis. The novel “The Strange Case of Dr. Jekyll and Mr. Hyde” by Robert Louis Stevenson and the film “Psycho” by Alfred Hitchcock influenced a large number of later works, especially American films.

Multiple (Split), the latest film by M. Night Shyamalan , screenwriter and director of “The Sixth Sense” and “The Visit”, is the most recent example of the use of multiple personality in fiction. However, there is a great deal of controversy regarding films that use DID to tell stories about violence and madness, and about the very existence of the disorder.

According to the DSM-IV-TR, in dissociative identity disorder two or more identities coexist in one person . These personalities control thought and movement alternately and may have different memories and thoughts, so each alter ego does not necessarily have the same information as the others.

The multiple personality would be due to disturbances that would prevent the normal development of identity , rather than the rupture of a formed personality. While the primary identity of people with DID is usually passive and depressive, the rest tend to be dominant and hostile.

Fine attributes dissociative identity disorder to a suggestion process similar to hypnosis that causes selective amnesia. However, personalities may be hierarchical so that some control the rest and can access their memories and thoughts. The change from one identity to another is usually attributed to varying degrees of stress.

Likewise, different identities can interact with each other, enter into conflict and manifest themselves to others as visual or auditory hallucinations ; references to alter egos as voices are typical. This may suggest certain similarities between multiple personality and psychotic disorders such as schizophrenia.

Dissociative identity disorder is diagnosed more often in women than in men. Women also tend to have more personalities. In general, persons diagnosed with multiple personalities have between 2 and 10 different identities.

The TID and dissociation controversy

Dissociative identity disorder is considered an extreme manifestation of post-traumatic stress disorder. In these cases there is usually a trauma in childhood, usually parental abuse or neglect . The symptoms occur as a defence against emotions and feelings that the child is not able to consciously handle. It also frequently occurs in conjunction with depressive disorders, borderline personality disorder and addictions.

In general the symptoms of TID are attributed to either dissociation or simulation . A fact that seems to reinforce the perspective that multiple personality is feigned is the fact that it is diagnosed much more frequently in the United States, where the majority of films revolving around this phenomenon have been produced.

There are those who claim that dissociative identity disorder is a chimerical diagnosis used only by Psychoanalysis, which in many cases is condemned from other orientations arguing that it generates false beliefs in patients.

The term “dissociation” refers to the disintegration of mental life : consciousness, perception, memory, movement or identity. Dissociation, proposed at the end of the 19th century by Pierre Janet, was used by the classical theorists of psychoanalysis to explain hysteria.

Even today, dissociation is often used as an explanatory construct. Cognitive-oriented authors such as Hilgard and Kihlstrom claim that the human mind is perfectly capable of provoking dissociative phenomena such as multiple personality through a brain process similar to hypnosis focused on consciousness or memory .

Multiple is a psychological thriller in which a man named Kevin kidnaps three teenage girls , apparently with the intention of using them to feed an imaginary or real being known as “the Beast”. In Kevin 23 personalities coexist, but those we see during most of the film are the most hostile and dangerous ones, who have managed to take control of their bodies by replacing the most adapted identities.

The leading actor, James McAvoy , puts himself in the shoes of 9 different characters during the film. The ones who interact most with the kidnapped girls are Dennis, an obsessive-compulsive man who enjoys watching naked girls dance, Patricia, a disturbingly friendly woman, and Hedwig, a nine-year-old boy who has a lisp – and who is a big fan of Kanye West’s music. These three rejected identities are known to others as “the Horde.

Much of the tension in the film, especially during the first few minutes, lies in the fact that, like the three girls, the viewer never knows which identity will take over next, or when.

As Kevin’s identities are described, they all wait sitting in a dark room until Barry, an outgoing and sensitive man who is the dominant personality, “gives them the light”, that is, he allows them to control the body they share. Patricia and Dennis, the “undesirable personalities”, are forbidden to have the light because of the danger they pose.

On the other hand, the little Hedwig, who is also rejected by most identities, has the capacity to be “in the light” whenever he wishes. Hedwig represents a regression to childhood that occurs at times when Kevin cannot face the reality of his actions; it is interesting that, in the protagonist’s personality structure, these regressions take priority not only over “healthy” personalities, but also over violent desires.

Among the personalities accepted by Kevin’s conscience, the ones we get to know during the film are Barry, already mentioned, Orwell, a man obsessed with the story and who speaks in a grand manner, and Jade, the only one of all identities who has diabetes. These alter egos maintain a kind of alliance with the ones that don’t show up; together they have managed to keep “the Horde” out of the conscious experience, or at least out of Kevin’s control, until shortly before the plot of Multiple begins.

Barry and his allies regularly visit a psychiatrist, Dr. Fletcher. She supports the hypothesis that people with multiple personalities can alter their body chemistry through autosuggestion, due to the beliefs that each identity holds about its own nature. For the psychiatrist, people with DID can develop “human potential” to a much greater degree than those without the disorder.

Is the plot realistic?

Many of the characteristics of Kevin’s disorder are based on the diagnostic criteria and clinical course usually described for dissociative identity disorder. Alternative identities begin to develop because of the physical abuse the protagonist receives as a child from his mother, particularly the more hostile ones, which bear a grudge against the others because it was they who endured the suffering during those moments.

Both in post-traumatic stress disorder and in DID it is common to refer to experiences of dissociation that took place in traumatic moments ; this would establish the habit of using dissociative mechanisms to escape from reality in moments of intense stress. The well-known pianist James Rhodes, author of the autobiographical book “Instrumental”, refers to similar dissociative experiences but without the presence of multiple personalities.

Kevin’s personality structure is quite consistent with those of cases diagnosed as multiple personalities. The different identities are hierarchical so that some of them (or at least Barry, the dominant personality) can access the memories of the rest, while, for example, the child Hedwig is completely unaware of the thoughts of others. These differences in access to mental contents generate the memory gaps of each of the identities.

A priori, the possibility of altering neurobiology according to personality status is one of the least credible aspects of the film. However, many times people with multiple personalities not only claim that their different identities have different mental disorders, as in the case of Kevin’s selective OCD, but also that some may be right-handed and others left-handed, some need glasses and others don’t, and so on.

As we said at the beginning of the article, a large number of professionals question the testimonies and studies that support these possibilities. In any case, in Multiple Shyamalan he uses the disorder as an excuse to play with the limits between reality and fiction , as he has done throughout his filmography.

The film Multiple has been criticized by groups working for mental health, such as the Australian association SANE, and online petitions for signatures have been registered against it. These platforms warn that Multiple and other similar fictional products, particularly from Hollywood, are harmful to people with complex mental disorders . They argue that people who have no more information about the disorders than they get from movies are led to believe that the people who suffer from them are dangerous and aggressive in nature.

While it is important to know how to separate reality from fiction and to understand that movies are still entertainment, it is true that the repeated use of multiple personality disorder in horror movies has transmitted a biased image of it – in case such a diagnostic entity really exists.