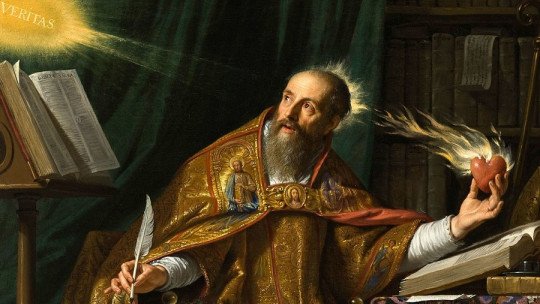 St. Augustine of Hippo (354-430) was a priest and philosopher of the Catholic Church, known as the “Doctor of Grace”. He dedicated his life to deep reflection on theology and politics, which laid the foundation for an important part of medieval and modern philosophy.

Next we will see a biography of Saint Augustine of Hippo , as well as a brief description of his main works.

Biography of St. Augustine of Hippo: Priest, Theologian and Philosopher

Augustine of Hippo, originally called Aurelius Augustinus Hipponensis, was born on November 13, 354, in a Roman province in North Africa called Tagaste (now Algeria). He was the son of Monica, of Berber origin and devoted to the Catholic Church; and Patrick, a descendant of pagan beliefs. Both were a respectable couple in Roman society.

At age 11 Augustine was sent to a school south of Tagaste where he remained until age 17 when he began his formation in rhetoric. After this, and despite having been raised Catholic, Augustine left the church to follow Manichaeism , a religion formed by the Persian prophet Mani, from whom he was disappointed years later. Shortly thereafter, he formed a family with the woman who was his companion for 15 years. With her he had his only son, named Adeodatus, who would die at an early age.

In 383, Augustine moved to Rome, where he continued to study rhetoric, philosophy, persuasion and public speaking skills. He soon became one of the most representative intellectuals of the Latin world , which also allowed him to carry out political activities.

Later he moved to Milan, where he finished his detachment from Manichaeism and concluded that it was a form of heresy to be combated. In philosophical matters he became interested in scepticism and neo-Platonism .

In the summer of 386, and after having gone through a deep personal crisis, detailed in his famous work Confessions ; Augustine of Hippo finally converted to Christianity. He abandons rhetoric and academia, renounces his marital commitment, and thus dedicates himself to the practice of the priesthood.

After this he returns to North Africa and founds a monastery. In the year 391 he was ordained priest in the city of Hippo , which is now Annaba, Algeria. From then on he was known as Augustine of Hippo, and soon he was recognized as a great preacher.

Augustine of Hippo died in 430, probably on August 28, at the age of 75, after being appointed bishop and “patron of the regular clergy”. Although the exact causes of his death are not known, it is known that it was in the context of the invasion of the Roman province of Africa by the Vandals of Genserico.

Augustine of Hippo was recognized not only in Italy and Africa, but also in Spain and in the Middle East. His works Confessions , City of God and Reconsiderations are especially well known, although there are many others. Below is a brief description of their main ideas.

This work is composed of 13 books, most of which are autobiographical stories . St. Augustine decided to name his work Confessions not only because of this, but also because of the religious meaning of the act of going to confession. The work is composed of Augustine’s reflections on his own life, taking as a reference the biblical book of Genesis.

He addresses issues such as the contradictions between his past and later positions of authority as a bishop. He also talks about the nature of sin and redemption , which shows the influence of Bishop St. Ambrose in Augustine’s thought, as well as Plato’s doctrines. He also discusses the renunciation of sexuality after priestly ordination, the search for divine wisdom, and the mystical experience that happened to him in Milan and that led him to finally decide for Catholic life.

In the context of the war and political conflicts between Africa and Italy, as well as in a religious environment that constantly faced paganism, St. Augustine spent 15 years working on a new way of understanding human society.

For the philosopher, it was necessary to establish a City of God capable of opposing the City of Man. The latter was condemned to disorder, so it was important that wise men advocated a city based on divinity .

The work is divided into 22 books, ranging from the questioning of pagan communities claiming different forms of divine power; to the biblical history of humanity (from Genesis to the Last Judgment). Thus, it sought to present a “true story” of the City of God. This is considered one of the fundamental works for understanding the political order that characterized the Middle Ages.

Reconsiderations was written in his last years of life, and offers a retrospective view of the career of St. Augustine . It is composed of several of his previous writings and includes comments on the circumstances in which they were written, as well as corrections or ratifications of what was said.

It is a work that expresses in a profound way the thought and life of this philosopher. It owes its title precisely to the exercise of self-analysis carried out by St. Augustine.