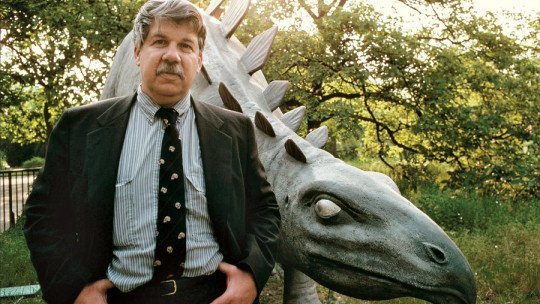 Stephen Jay Gould (1941-2002) was an American geologist, paleontologist and science historian who has been very influential in the theory of evolution, as well as in the dissemination of scientific knowledge in different areas.

It is recognized to this day as one of the legends of 20th century science. We will now take a brief look at the life and work of this scientist through a short biography of Stephen Jay Gould .

Stephen Jay Gould was born on September 10, 1941 in the Queens neighborhood of New York City. He was the son of a World War II veteran stenographer, and an artist who was the daughter of immigrant Jews living and working in Manhattan, New York.

Both Stephen Jay Gould and his younger brother grew up in northeast Queens, a middle-class neighborhood where Jay had the opportunity to attend school. At the age of 19 he attended Antioch High School, where he participated in several student movements for civil rights and social justice , especially against segregationist policies of racialization.

In fact, much of his later work focused on denouncing different forms of oppression due to cultural differences, and he strongly criticized the scientific racism that permeated research production at the time. For Gould, scientific theories that had racist biases were nothing more than pseudoscience used in the service of racism.

However, Stephen Jay Gould is best known for his work in paleontology, whose interest began at a young age after visiting the dinosaur exhibit at the American Museum of Natural History in New York.

During his time at Antioch College, Stephen Jay specialized as a geologist and philosopher , and later took some courses at Leed University in England. He continued his training at Columbia University under the tutelage of geologist and paleontologist Norman Newell, and was finally hired by Harvard University, where he served as professor and curator at the Museum of Comparative Zoology.

Gould has been a very important researcher for the evolutionary theory , becoming one of the three most cited authors in the journal Palaeobiology (it is found only after Darwin and Simpson). But not only that, he is also recognized as an important historian of science and as one of the best science popularizers. Especially after having worked for a long time for the magazine Natural History.

Stephen Jay Gould died in New York City on May 20, 2002 from lung cancer that had spread to other parts of the body.

As we have seen, Stephen Jay Gould worked not only as a paleontologist but also as a biologist and historian of science . He is recognized for having developed theories on evolutionary biology that were in strong opposition to the emerging sociobiology, since he considered it a deterministic view of society. On the other hand, his theories were also in opposition to evolutionary psychology, because he considered it a deterministic perspective of individual human action.

However, it also recognized several of the contributions of both branches, and at the same time remained outside of Darwinian determinism . He also defended the hierarchical theory of evolution as a way of extending Darwin’s classical theories. In line with this, Gould took a firm position against the thesis of creationism and against the collaboration between science and religion.

Perhaps the most recognized theory of Stephen Jay Gould is the Theory of Punctuated Equilibrium, developed with another American paleontologist named Niles Eldredge. In this theory, based on fossil records, he proposes that evolution has occurred at a certain rate .

This rhythm has the main characteristic of having occurred in a ramified way, that is to say that, from a first species, many others gradually emerged. The genetic changes in this process have occurred during periods of stability with minor modifications, interspersed with changes that occur relatively quickly.

Unlike previous theories which proposed that a vanished species was followed by a more evolved one, and so on; punctuated equilibrium suggests that the same ancient species could give rise to many different species in a branched (or punctuated) way. This theory represented a very important neo-Darwinian revolution for understanding evolution.

In 1982, Gould received the Alexander Agassiz Award (Professor of Zoology), from Harvard University. The following year he was granted membership in the American Association for the Advancement of Sciences and six years later, he was appointed president of the Association .

He also served as president of the Paleontological Society and the Society for the Study of Evolution. Finally he was named in 1989 member of the National Academy of Sciences , and in 2001, a year before his death, he was named the Humanist of the Year by the American Humanist Association.

His most renowned popular texts are La false medida del hombre from 1980, La vida maravillosa , from 1999 and Desde Darwin , from 1977, which was his first published book. Also very influential has been his last published book, where summarized the theory of modern evolution according to his own research . It is the book The structure of the theory of evolution , from the year 2002.

Other of his works, where he tackled the differences between science and religion, are Once upon a time there was a hedgehog and a fox , from 2003, and Science versus religion, a false conflict , from 1999.