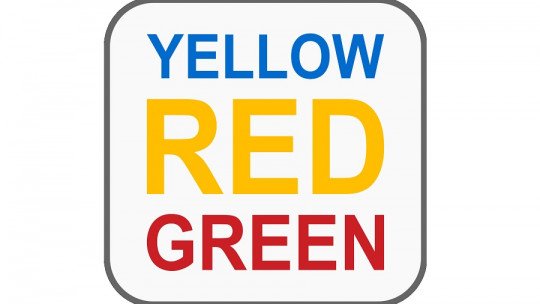 Many people, in their visit to the virtual world, find a very shared post, in which they can read colored names but that come written in different colors.

Below the picture is the typical question of can you say the color without reading the word? What may seem like just another Internet challenge is really a cognitive test, with its own associated effect.

The Stroop effect is what is tested in this type of post, and has been addressed experimentally. We’ll take a closer look at what it is below.

What is the Stroop effect?

The Stroop effect, also called Jaensch effect, is a semantic interference that occurs because of having automated the reading , making us give priority, unconsciously, to those stimuli that come in the form of written words before other modalities, such as shape or color. This phenomenon is named after the person who first described it, John Ridley Stroop.

While we will go into more detail in the next section, we will try to explain very quickly how the effect happens. Let us imagine that we have a list of words, each one painted in a different color and that, coincidentally, each word refers to the color in which they are written. For example, the word ‘BLUE’ is painted blue, the word ‘RED’ is painted red, and so on.

If we were asked to say the color of the ink of each word, it would be a very simple thing to do. We may simply read the words, knowing that each word does not ‘lie’ or ‘deceive’, since it refers to the color in which it is written. The problem comes when the written colour and its ink do not correspond , for example, ‘GREEN’ written in yellow. We can’t read anymore, we have to look carefully at the color of each word, and we will be slower and possibly make some mistakes.

The reading is something we have very automated. This is something that the vast majority of people who have the great gift of being literate do not notice. Reading every word, for every person without problems such as dyslexia or very late literacy, is a very fast process. It is seeing the word and ‘clicking’, we have already read it and, depending on how abstract or concrete the concept is that it refers to, we have made a mental image of its meaning.

How was it discovered?

This phenomenon is named after the person who first described it, John Ridley Stroop , who published his research in 1935 in his article Studies of Interference in Serial Verbal Reaction.

In this article, published in the Journal of Experimental Psychology, Stroop applied two tests. One, called Reading Color Names or RCN, in which the subject had to read the written meaning of the words, which were written in different colors, while the other, called Naming Colored Words or NCW, the reader had to say the color of the ink in which the words were written.

Specifically in the NCW tests, the subject, who had to say the color of the ink for each of the words on the sheet, Stroop obtained very interesting results. At first, the words shown to the participants were the same color as the ink in which they were written, that is, the word “BLUE” was blue, the word “RED” was red, “GREEN” was green…

When the subject was in this condition, he did not have much difficulty in saying the color of the ink, since it corresponded to what was written. The problem came when they had to say the color of the ink of the word but the name of the color to which the word referred did not match. That is, the word “RED” but written in blue ink, “BLUE” in yellow, etc.

He saw that, in addition to more errors in this second condition, the participants took longer to answer, since they had to “neutralize” their reading process , which is automated, and try to say only the color of the word they were seeing. It is this interference that is known as the Stroop effect in experimental psychology.

Attention is selective, that is, we focus it on what interests us. However, if we try to focus on something by trying to inhibit such an automated response as reading words, this becomes especially complicated. The Stroop effect results from an interference between what we want to focus on and the reading that we can hardly ignore .

Do you always use colors?

This same test has been replicated in other ways, without the need to resort to colours alone.

An alternative way is to present animal names within animal silhouettes as well , which may or may not correspond to the animal written inside. For example, present the word “PIG” inside the figure of an elephant, or the word “DOG” inside that of a fish. Other versions include geometric figures (e.g. “TRIANGLE” inside a circle), country names, flags, fruits and a host of alternatives.

One of the reasons why these Stroop tests exist is, above all, the existence of people who have some kind of colour blindness , either colour blind for one or two colours or blindness for any colour. In the latter case, people see the world in white and gray, which makes it impossible to test their ability to see the color of the ink of words since, basically, color does not exist for them.

Importance of the Stroop effect in the diagnosis of ADHD

The Stroop effect occurs as a consequence of having automated the reading, and is a phenomenon that tests the selective attention of the person , trying to avoid reading the word and saying some characteristic of that word, either the color, the way it is presented or any other aspect.

Given this, the effect of Stroop and, in particular, the tests based on it have been very useful in studying the cases of people who have been diagnosed with attention-deficit hyperactivity disorder (ADHD), in addition to clarifying their diagnosis.

ADHD, according to the DSM, is characterised by a sustained pattern of inattention , with or without the presence of hyperactive and impulsive behaviours. This pattern is more frequent and becomes more severe when compared to people who do not have any disorder and are in the same state of development. These behaviors must occur in more than two different environments.

ADHD, although criticized for its diagnosis, is, according to health authorities, one of the most important clinical problems in terms of dysfunction, from childhood to adulthood, leading to problems in multiple areas of a person’s life.

According to Barkley (2006), the central problem of this disorder is difficulty in inhibitory control, shown in the form of impulsivity and difficult control of cognitive interference . This has repercussions on executive functions such as working memory, both verbal and non-verbal, self-regulation and the capacity for synthesis and analysis.

The Stroop Effect serves as a measure of a person’s executive functioning, especially their ability to pay attention and concentrate. It allows us to measure selective attention and to see how flexible or rigid a person is cognitively. It allows us to see if he is able to inhibit and control his dominant responses, in this case, reading words.

Cognitive flexibility refers to the ability to quickly and appropriately change one thought or behavior for another, according to what the person is being asked to do in the task at hand.

On the other hand, cognitive rigidity is understood as the degree of difficulty a person may have in ignoring distractions, or the inability to control his or her incorrect responses, in this case, saying the name of the written word instead of the color of the ink in which it is written.

The Stroop effect is considered a reflection of problems in the prefrontal area , which takes care of the executive functions. This test is of great importance in the field of neuropsychological assessment due to its quick application and easy interpretation.

People with ADHD have a fairly rigid cognitive style, with difficulty in inhibiting their behaviours compared to people without any developmental pathology. They show a greater interference when it comes to saying the color of the words in the Stroop test without saying what is written.