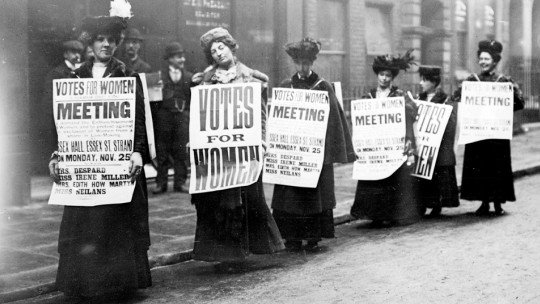 In order to understand the present, we need to delve into the past and the first movements that initiated the shift from despotism to a time when there is much more equality. In the case of gender equality, the first people to promote change were the suffragettes , representatives of one of the first forms of feminism.

But… who exactly were the suffragettes and what did they stand for?

What are the suffragettes?

The suffragettes were a political and social group that emerged at the end of the 19th century and was consolidated at the beginning of the 20th century. In its beginnings it was headed by the famous Emmeline Pankhurst (1858 – 1928), an atypical figure from its beginnings, fleeing from the traditionalist female laminate (that is, in part, because she did not receive a “little princess” education, as historians point out, but was raised and educated within a family that defended civil rights).

This is therefore a political and social movement of organized women who, during the 19th century, maintained a political struggle with the authorities in male-dominated England, in a context where women were regularly sexually abused in their jobs by their masters, were denied the right to study and the husband had the power to punish his wife as he saw fit.

Broadly speaking, the suffragettes dissociate themselves from conventional peaceful demands or from words by taking action: “Deeds, not words”.

This slogan was led by this movement on a permanent basis, suggesting acts that would attract the attention of the British authorities. Well, this guideline was taken to the letter, and so the pressure exerted by this political group became impossible to ignore.

Like any great important and influential character in history, Emmeline Pankhurst received from her childhood a vindictive education and conscience with social progress. These values were evident in the movement she led.

The suffragettes were motivated by the feminist magazine “Women’s Suffrage Journal”, founded in 1870 by Lydia Becker and Jessie Boucherett. Considered the first women’s rights activists, Emmeline and her mother Sophia Jane met Lydia Becker at a meeting on women’s suffrage . “I came out of that meeting convinced that I was a committed suffragette,” Pankhurst said.

Another turning point for the suffragette movement was the fact that seized the values of the French Revolution with a little nuance : equality. Any claim for civil and human rights, protests or other similar demands, were intended exclusively for man, denounced the movement.

Modus operandi of the suffragettes

Women’s suffrage rights date back to the early 19th century, but it was not until the middle of this period that the suffrage movement took hold in England (around 1855). Imitating any other type of claiming politics, the movement was articulated at first in a peaceful and democratic way, introducing amendments in the English Parliament to extend women’s rights .

It was at the end of the 19th century that the Suffragettes decided to take another path. When a petition in the House of Commons by John Stuart Mill and Henry Fawcett, the famous “Ladies Petition” to change the word “man” to “person” when referring to suffrage, was rejected, the National Society for Women’s Suffrage was created by the aforementioned Lydia Becker.

The revolution in the streets

After unfulfilled promises, misleading laws and institutional contempt for everything that had been claimed to date, the first public incidents were recorded by the suffragettes: rioting, disturbance of the peace, urban violence, material damage and even the odd terrorist act against the finance minister, David Lloyd George, in his own mansion.

One of the victims belonging to the suffragette movement, Emily Wilding Davison, was martyred in 1913 when she assaulted King George V’s horse to show him the flag of her organization and give voice to his discontent. “A tragedy would prevent thousands from coming,” Emily defended until her death.

The legacy of the first feminist struggle

Thanks to the busy but successful track record of the women suffragettes, several of the greatest achievements for women’s rights have been made . Everything changed in 1928, when the right to vote for women was approved. Later on, it would be accepted the admission of female students to Universities such as Oxford or Harvard, the inclusion of female members of parliament in European parliaments, a leading role in the world of cinema with films that remind us of the struggle of the female suffragettes.

Another major achievement of the movement is the union it achieved at the class level, thus absorbing another issue worthy of claim. Women workers in factories, servants of the nobility and women of that same nobility, fought side by side for a common goal: “freedom or death,” as another of the slogans of suffragism would have it.