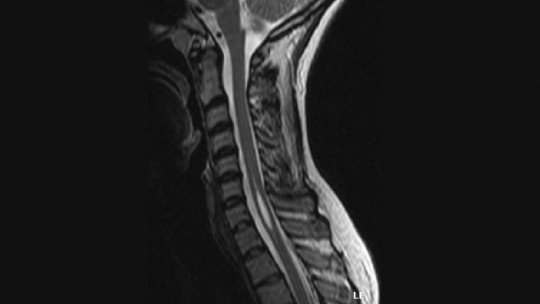 Many conditions or disorders are related to abnormalities in the flow of spinal fluid and the appearance of cysts or malformations in the spinal cord. In addition, on many occasions these are asymptomatic and imperceptible, which means that they continue to develop without the person being aware of it.

One of these disorders affecting the spine is syringomyelia , a disorder that, although at the beginning it does not show any clinical picture, can cause major motor and sensory complications.

The disease known as syringomyelia is an organic condition that causes the appearance of a cyst located inside the spinal cord . This lump which is filled with a watery fluid is known as a syrinx.

In addition, people who suffer from it also often suffer from other symptoms such as severe headaches or sensory symptoms such as impaired thermal perception. However, the symptoms can be very varied and affect patients in many different ways, even not generating any kind of symptom.

The incidence of syringomyelia has traditionally been quite difficult to estimate because it shares many symptoms with other diseases, making it difficult to diagnose. However, thanks to the advance of diagnostic tests using neuroimaging, its detection has been improved.

As mentioned above, syringomyelia is a gradually developing disease in which symptoms tend to appear after adulthood. In cases where it is due to a Chiari malformation, these begin to manifest themselves between the ages of 25 and 40 .

At other times, symptoms may appear suddenly or abruptly when the patient experiences severe coughing spells or after intense physical exertion. However, this does not mean that these are the causes of the illness.

The clinical picture of syringomyelia mainly affects the neck, shoulders, arms and hands , but over time it eventually extends to the lower extremities as well.

Among the main symptoms of syringomyelia are

Although in many cases it may not cause any symptoms, due to its gradual progression, syringomyelia can become a disease with very serious complications for the health of the person. These complications have their origin in an excessive growth of the syrinx.

This growth tends to injure certain groups of nerves in the spinal cord, causing the following symptoms:

Although syringomyelia may be caused by traumatic, infectious or tumour agents, the truth is that in most cases it is practically impossible to determine the specific origin of this disease .

When the disorder is caused by some other disease or condition, the lesions they cause may obstruct the flow of spinal fluid. As a result, it moves towards the spinal cord, forming the syrinx.

The diseases that can cause these cysts include

Because syringomyelia has no early symptoms, it is likely to be detected accidentally when a person is evaluated for another disease.

However, because the symptoms are the same as those of many other conditions of a similar nature, the doctor makes a thorough assessment that allows him to rule out other diseases.

A good diagnosis of syringomyelia implies that the professional takes a complete and detailed medical history, accompanied by a physical examination . To do this, he may use magnetic resonance images of the spinal cord and the marrow, as well as an exploration by means of a computerised axial tomography which provides a detailed image of the affected area.

Intervention guidelines for the treatment of syringomyelia are subject to both the severity of the symptoms and the condition or disease causing it.

In those cases in which it is not related to any other disease and, in addition, the patient does not manifest serious signs or symptoms, it will only be necessary to carry out periodic controls by means of resonances and neurological evaluations .

However, when syringomyelia causes great discomfort or occasions interference in the patient’s daily life, surgery is recommended. By means of a small surgical operation , the pressure exerted by the cyst on the spinal cord is reduced, thus mitigating the severity of the symptoms.

The type of intervention may depend on the main cause of the cyst formation so it can go from draining the cyst, removing the tumor mass that forms the obstruction or correcting and treating the abnormality that forms the syringomyelia.