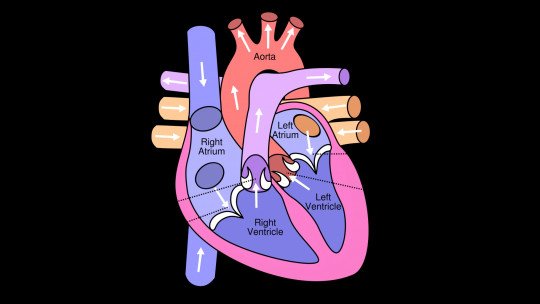 One of the earliest developing organs and along with the brain one of the most important for our survival is the heart.

This organ, the main nucleus of the cardiovascular system, allows the blood to travel and irrigate the different organs of our body. But the heart is not a uniform mass, but is made up of different elements. In this article we will talk about the different parts of the heart.

The Heart as the Core of the Cardiovascular System

The heart is the main organ of the cardiovascular system . It is an organ made up of hollow muscle tissue whose contractions and dilations cause blood to be pumped out to the rest of the body. Its contraction or systole is the movement by which blood is allowed to leave and be propelled into the arteries, while diastole or dilatation allows blood to enter from the veins.

The pumping of blood causes nutrients and oxygen obtained from other body functions such as breathing and digestion to reach the various organs of our body, as well as being released from the waste products of their operation (as occurs with carbon dioxide, which travels to the heart and then goes to the lungs and is excreted with the breath).

Although its functioning may seem simple, the truth is that its beating involves the coordination of the movement of the heart muscle and the correct functioning of its different parts . Its importance is such that the cessation of its functions causes our death (unless artificial mechanisms are used to perform the same function).

Although the heart is connected to and influenced by the nervous system, it actually acts largely autonomously.

Parts of the heart and their functions

The human heart is made up of different parts whose coordinated action allows blood to be pumped. It is widely known that we can find four chambers inside the heart: two atria and two ventricles.

But we must also take into account that there are other elements such as the valves that communicate between them and allow both blood to pass and not return or the partitions that separate them. In general we can find the following parts of the heart .

One of the four main chambers of the heart in which blood is received and pumped . The left atrium is characterised by its connection to the pulmonary veins, from which it receives highly oxygenated blood and then sends it to the left ventricle. One of the parts of the heart, separates and communicates the left atrium from the left ventricle . Its opening (generated by the atrial systole) causes blood to travel between the two regions.

Another major part of the heart. The left ventricle receives oxygen-rich blood from the left atrium and sends it to the rest of the body through the aortic artery.

This valve separates the aorta from the left ventricle and allows blood with oxygen to reach the rest of the body through the artery when it opens . It opens upon contraction or systole and closes upon dilation/relaxation or diastole.

The right atrium receives the blood from the cavernous veins, already deoxygenated, to send it to the right ventricle .

Located between the atrium and the right ventricle, the tricuspid valve separates both cavities and allows blood to pass between them through its opening . It also prevents the blood from flowing backwards once it is closed (which occurs when the ventricle contracts).

It is a valve that separates the right ventricle from the pulmonary arteries. The contraction of the ventricle causes it to open, allowing blood to pass into the respiratory system .

This is the muscle wall that separates both atria .

This element located in the upper part of the right atrium may not be particularly well known, but it is one of the most important parts of the heart as it allows it to function.

This is because this nodule is the structure that allows the heart to beat the general electrical impulses that cause it to contract (similar to neurons, the heart beats because this element generates action potentials based on the chemical balance between sodium and potassium). Its functioning is regulated by the autonomic nervous system, although it can function on its own.

This node is another part of the heart whose functioning allows the heart to beat . It conducts and helps coordinate the electrical impulse initiated in the sinus node. It allows the ventricles to stop contracting before the blood in the atria passes into them.

13. His fascicles and Purkinje fibers

These are the elements through which the electrical impulse initiated in the previous modules is transferred through the entire heart , allowing for example the discharge to reach the ventricles.

Although they are not properly part of the heart, the following veins and arteries maintain direct contact with it.

These are the veins that carry the blood from the lungs to the heart, being its content rich in oxygen (it is the only type of vein whose content is abundant in oxygen).

This artery carries oxygen-rich blood to the rest of the body.

The cavernous veins are the blood vessels that bring back the deoxygenated blood that has been running through the body to the heart.

These are the blood vessels that will carry blood without oxygen to the lungs for oxygenation. This is the only type of artery that carries blood without nutrients or oxygen.