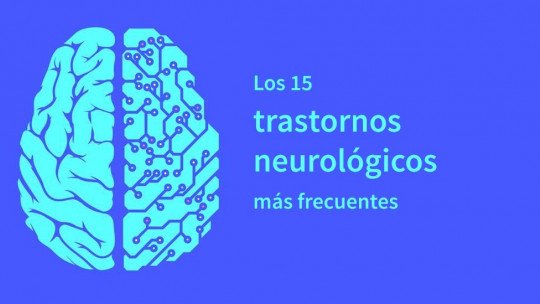 Understanding, feeling, perceiving, reasoning, planning, inferring, relating … All these processes are carried out and/or mediated by the brain.

This body organizes and supervises all the functions of the human organism. However, the health of this body is not always optimal, and accidents or illnesses can occur that affect its proper functioning. This causes a series of serious effects in the whole organism, which can lead to its death. This is the case of neurological disorders .

What are neurological diseases?

Neurological disorders are those pathologies located in any point of the nervous system , either in the brain, spinal cord or other nerves and nerve extensions, altering its correct functioning. The symptoms of these disorders can be very varied, producing both a deficit and an excess of neuronal activity in any system of the body. The causes depend on the disorder, and may even be unknown at present.

The most common neurological disorders

These are the fifteen most common neurological disorders.

Although it is not a single disorder as it encompasses a range of potential problems, cardiovascular accidents are currently one of the three leading causes of death in the world . These accidents can have a very diverse cause, course and effects depending on the area affected.

Basically they can be classified as cerebral haemorrhage, that is to say the rupture of a blood vessel in the brain that produces a flood in the brain that kills the surrounding neurons by compression, and ischaemia or ictus that are produced when the blood supply to a part of the brain ceases, generally due to a thrombus or access that prevents irrigation in the area.

In any case, causes neuronal death that will produce serious effects on the person’s functions and domains , which may lead to death, vascular dementia, acquired disorders due to brain injury or even a temporary loss of some function with complete recovery in the case of a transitory stroke.

The best known dementia is also one of the most common neurological disorders in the population. This disorder, Alzheimer’s, is an insidious and progressive dementia that starts with recent memory loss and anomie (difficulty in finding the name of things). This disorder evolves through three phases, producing a progressive deterioration in all intellectual functions and autonomy.

Thus, as the disorder progresses, difficulties appear in the second phase in speech, praxis or sequenced movements and in the recognition of people and objects (this set of symptoms being the so-called aphaso-apraxo-agnostic syndrome) and with time in the third phase these conditions worsen, culminating in the patient’s bedding and mutism. Although a specific cause is not yet known, at a neurological level the presence of neurofibrillary tangles and beta-amyloid plaques has been observed, especially in the temporal and parietal lobes.

This disease is also one of the most common neurological disorders. At the neurological level, the existence of a degeneration of the nigrostriatal system has been observed, which leads to a deficit of the neurotransmitters dopamine and GABA in this system. The best known and most characteristic symptom of this disorder is parkinsonian or rest tremors, which are manifested by spasmodic shaking of the distal limbs (especially the hands) which occur in the resting state. In addition to this, other outstanding symptoms of this disease are the presence of high demotivation, gait disturbances, lack of blinking and facial expression and poor movement.

A subcortical type of dementia may develop over the years, although it does not occur in all cases. If it does occur, mental and physical slowing down, failure to recover memory and difficulties in executive and visuospatial tasks stand out.

Headache is understood as one of the most common disorders of the nervous system worldwide, headache . Within the group of headaches, among which we find subtypes such as tension headache and cluster headache, migraine and tension headache stand out especially

As far as tension headache is concerned, its appearance is usually related to stress or muscle problems.

There are two basic subtypes of headache, the episodic and the chronic . The first appears in attacks of short duration, being the most frequent type of headache. The second causes much greater disability as it persists over a much longer period of time. The pain is mild or moderate.

Migraine, mostly genetically based, is caused by the release of inflammatory substances around nerves and blood vessels in the head. It is usually a recurrent condition throughout life. Moderate to severe headache, nausea, and intolerance to light and sound are common, with the pain becoming more severe with activity.

A brain disorder that occurs when brain cells send wrong signals . Within this disorder there are the crises of great evil and those of small evil. The former are the best known, characterized by the presence of loss of consciousness followed by convulsions, incontinence, tongue biting and hallucinations. In the latter, there are no convulsions, and they are characterized by a mental absence.

Normally, the comic attacks are preceded by an aura, some initial sensations that the affected person can detect such as a previous tingling, hallucinations or obnubilation (confusion). The aetiology of this disorder can be very diverse, and can be due, among other things, to the presence of brain tumours, head trauma, atypical development of the nervous system or other alterations and diseases.

Chronic progressive disorder of the central nervous system caused by insufficient production of myelin in the neurons of the white substance. Progressive demyelination of neurons occurs. Although there are several possible courses for this disease, in general multiple sclerosis occurs in a fluctuating manner, i.e. in the form of outbreaks that disappear and improve, with a progressive worsening.

Although the specific symptomatology of each moment will depend on the affected areas, with frequent visual and sensory alterations, motor weakness, pain and fatigue, spasticity or perceived muscular tension and hemiparesis, among others. Although there is no cure so far, some promising drugs are being tried.

Brain tumors are also among the most common neurological disorders . They are produced by the uncontrolled and abnormal growth of some type of brain material, and may appear in neurons, glia or meninges. Although there is a wide classification of brain tumours according to the type of cell that produces them and their behaviour, all of them are highly dangerous for the life of the patient, even those with benign behaviour.

This is because the progressive growth of matter causes a great deal of pressure from the rest of the brain against the skull, displacing structures, deforming them and crushing them. The specific symptoms depend, as in the case of strokes, on the location of the tumor and the areas that are directly or indirectly affected.

This is the most frequent muscular dystrophy in humans, especially in males . This neuromuscular disorder, usually of infantile onset, has as its main symptom a generalized muscular weakness that develops in a progressive and chronic manner. Over time it produces difficulties in walking and even breathing, with death being common in young adulthood due to problems such as heart failure.

A bacterial or viral infection affecting the meninges or membranes that protect the nervous system , producing inflammation of these and affecting the nervous system as a whole. It is common to have febrile symptoms, nausea, photophobia, intense headaches, alterations in consciousness or mental state. Although immediate intervention is required, this is a medical condition that can be reversed, although its consequences may remain chronic.

This disease, popularized in recent times by the well-known Ice Bucket Challenge campaign, is a progressive neurological disorder that attacks motor cells, degenerating them to cell death .

In this disease, the neurons stop sending messages to the voluntary muscles, which end up atrophying, preventing movement and speech. Over time, this affects the thoracic muscles and the diaphragm, requiring artificial respiration and making respiratory arrest a probable cause of death. The damage affects only the motor neurons, so cognitive abilities are preserved.

ADHD is a disorder that is diagnosed very often in childhood, yet is very controversial. The reason for this is that the diagnostic criteria to identify it are very ambiguous, and it is estimated that many times it is detected in children who do not really present it; that is, false positives appear and it is overmedicated .

In fact, little is known about this neurological disorder, beyond that it causes the brain to function abnormally, judging by what has been seen by neuroimaging methods, and that this fits the descriptions of young people who experience serious concentration problems even taking into account their age.

This concept groups together a set of symptoms related to the problems in understanding non-literal aspects of language, socializing and showing prosocial behavior. Moreover, in more than half of the cases these problems appear together with the intellectual disability.

Dyslexia is one of the most common learning disorders, and consists of abnormal brain functioning that makes the task of reading, i.e. extracting meanings and vocalizations from a series of symbols, very complicated.

People with this condition are unable to control a series of repetitive movements similar to very elaborate tics. This affects both their social life and their general quality of life, as it is an intrusive element that generates stress and prevents them from concentrating.

Similar to dyslexia, this neurological disorder is not in itself a health threat , but rather an impairment of the ability to learn. In this case, what it costs is to perform mathematical operations and manipulate numbers in general.