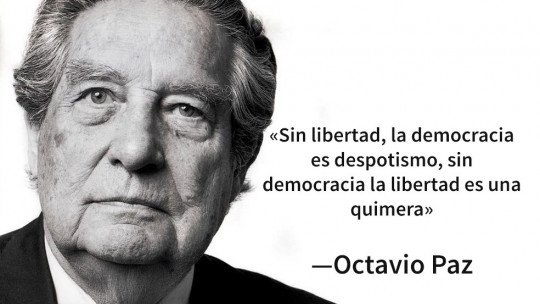 A Mexican who transported us to new worlds. The great Octavio Paz (Mexico City 1914 – 1998) was a remarkable poet , writer and thinker who is recognized as one of the best authors of the twentieth century.

Born in the middle of the Mexican Revolution, he lived in the United States during his childhood, only to return to his native Mexico as a child. He wrote throughout his career, combining works of poetry, prose and translations.

Nonconformist and owner of an incomparable style, Octavio Paz influenced a whole generation of artists and thinkers. This led him to win the Nobel Prize for Literature in 1990.

In today’s article we will know the best thoughts, statements and famous phrases of Octavio Paz.

1. The unreality of the gaze gives reality to the gaze.

Everything is based on the point of view, and on knowing how to interpret what we see.

2. Light is the time that you think.

From one of his most beautiful poems.

3. A society possessed by the frenzy of producing more to consume more tends to turn ideas, feelings, art, love, friendship and people themselves into objects of consumption.

A criticism of the consumer society and the poverty of art that emanates from it.

4. To love is to strip away the names.

Octavio Paz’s thought always forces us to revise our vision of existence.

One of Octavio Paz’s most famous and remembered verses.

7. The protection afforded to marriage could be justified if society truly allowed for choice. Since it does not, it must be accepted that marriage does not constitute the highest realization of love, but is a legal, social and economic form that has purposes other than those of love.

Reflecting on the love and culture behind marriage.

One of Octavio Paz’s phrases in which he investigates human sexuality.

9. Love is a feeling that can only be born before a free being, who can give us or withdraw his presence.

Certainly, if love is not in full freedom, it cannot be love.

10. Poetry makes us touch the impalpable and listen to the tide of silence covering a landscape devastated by insomnia.

Another of his literary pearls, in this case with a metaphor only worthy of his magnificent pen.

A nice line about love.

12. To love is to fight, to open doors, to stop being a ghost with a perpetual number condemned by a faceless master.

The transgression linked to love in a society of fools and corrupt.

13. Pride is the vice of the powerful.

What are proud people like? We tell you in this article.

14. We love a mortal being as if he were immortal.

Feelings can lead us into a realm of unreason, especially in the field of love.

15. Without freedom, democracy is despotism, without democracy freedom is a chimera.

On how to govern society.

16. In female relationships, pecking, envy, gossip, jealousy and petty perfidy are common. All this is almost certainly due not to women’s innate incapacity but to their social situation.

17. The revolutions of the 20th century were and are, precisely, the seedbed of democracies. They have been a cruel response from the history of Marx’s predictions: the revolution that would end the state has not only strengthened it but has created a social group that is, at the same time, its creature and its owner.

A personal view on the historical events of the last century.

18. Once, facing myself, my face broke in front of the mirror: was it my own face, that icy reflection of nothingness?

Who am I? A question Octavio Paz has asked himself repeatedly.

19. Love is an attraction to a unique person: to a body and a soul. Love is choice; eroticism is acceptance.

On eroticism and its conditioning.

20. For the Mexican, life is a chance to fuck or be fucked.

An irreverent phrase to describe the class society in Mexico.

Another excerpt from his best poems.

22. Sacrifices and offerings soothe or purchase the gods and patron saints; gifts and feasts, the people.

23. The profound meaning of social protest consists in having opposed the implacable ghost of the future to the spontaneous reality of the now.

A revolutionary phrase that confronts desires and realities.

24. Living well requires dying well. We have to learn to face death.

About facing death with determination and humanity.

25. More difficult than despising money is resisting the temptation to do works or to transform oneself into a work.

Reflections on the crematory and on art.

26. None is the absence of our gaze, the pause of our conversation, the reticence of our silence.

27. Love is born from a crush; friendship from frequent and prolonged exchange. Love is instantaneous; friendship requires time.

An excellent reflection on the psychological mechanisms that facilitate different types of relationships between human beings.

28. Our instruments can measure time but we can no longer think about it: it has become too big and too small.

A sentence about time and our battered perception of the course of time.

29. In a world made in the image of men, woman is only a reflection of the masculine will and desire.

A sentence about the prevailing sexism in the West.

30. Waking up to history means becoming aware of our uniqueness, a moment of reflective rest before giving ourselves over to doing.

The reflection that precedes the action, to integrate us towards an uncertain future.