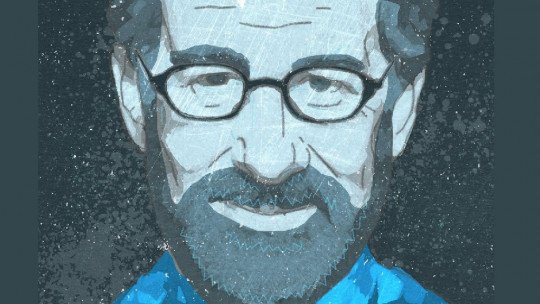 Steven Spielberg (Cincinnati, 1946) is an American-born film director, screenwriter and producer. His film work is absolutely essential to understanding cinema in the 20th and 21st centuries.

Mass idol in Hollywood, popular culture has a privileged place for Spielberg. Films such as E.T. the Alien, the Indiana Jones saga or Schindler’s List are part of the cultural heritage of any film buff.

To review the career and thinking of this phenomenal director, we have set out to compile the best phrases of Steven Spielberg . He will talk to us about life, about friendship and, above all, about the seventh art.

1. I love the smell of the movies.

A peculiar way of approaching the emotions that come out of the cinema.

2. Every time I see a movie in the theater it’s magic, no matter what the plot is.

In this sentence, Spielberg talks about his unconditional love for everything surrounding the seventh art.

3. I don’t think any person in any war in the world sees himself as a hero.

An avowed pacifist, Spielberg has opposed all U.S. imperialist wars.

4. We are all a different person every year. I don’t think we will remain the same person all our lives.

Change is the only thing that is permanent, as Heraclitus himself could say.

5. People have forgotten how to tell a story. Stories no longer have a knot and an ending, but a beginning that never ends.

6. We have a lot of time to create the dreams we haven’t even dreamed of yet.

The phrase of a hopeless dreamer; absolutely necessary to build science fiction films with Spielberg’s clairvoyance.

7. In desperate times, desperate measures must be taken.

A phrase that is often used in political contexts.

8. People have to look beyond the television or the press. And consider whether a leader speaks from the heart and fights for his own beliefs or merely conveys the ideas of others.

About the ability to perceive true leadership.

9. Nothing I do as a filmmaker is motivated by awards. (…) It may seem that awards are the icing on the cake, but for most of us the icing is simply doing the work.

A self-respecting filmmaker should not have any kind of recognition in mind.

10. It makes no sense for my country to trade with North Korea and China and not Cuba.

On the double standards in the economic and trade policy of his native country, the United States.

11. War destroys the intellect. When that happens, everything comes down to reaction, and the person discovers more quickly who he really is.

12. Humor is important in politics, as in all aspects of life.

In fact, in almost all his films, humour plays a major role.

13. You know, I don’t really look at myself much when I’m working on a project. Everything I am becomes what the film is. But I can change; you change.

The mutability through the needs of each argument.

14. Many of my films are about the way I wish the world were, and that’s part of my art, which in the end is an interpretive art.

Utopia and how to move towards it with a firm step.

One of Steven Spielberg’s most beautiful and memorable phrases.

16. We have a lot of time to create the dreams we haven’t even dreamed of yet.

Time, infinite and impassive, waits for us to take sides in the realization of our dreams.

17. Hope for the best. There would be no progress if we thought the glass was half empty and feared the worst. That has always been my philosophy: I am an optimist.

Optimistic phrase where there are any.

18. I was making a lot of 8mm home movies since I was twelve, doing little dramas and comedies with the neighborhood kids.

About his intrepid beginnings in the world of cinema.

19. So I try to reinvent my own eye every time I face a new subject. But it’s hard, because everyone has style. I can’t help it.

The vices and aesthetic hobbies always remain there.

20. Most of my assumptions about a production are usually wrong.

When approaching a new project, most preconceived ideas end up turning against reality.

21. People’s movements are very important because they give voice to problems, and the people want representatives who express their problems. In fact, America was created through a popular movement, coming from the bottom up.

A reflection by Steven Spielberg on social and political movements.

Despite this statement, Spielberg is one of the directors who have made the most money in his career.

23. One of my daughters is a competitive horse jumper, we live with the horses, we have stables on our property. But I don’t ride. I watch, and I worry.

A lovely phrase about loving your daughters.

24. I did not take any poetic license with ‘Schindler’s List’, because that was a historical document, in fact.

About the rawness of the film.

With this nice phrase, Steven Spielberg gives us to understand that his passion is cinema.

26. I interviewed the survivors, went to Poland, saw the cities and spent time with the people and talked to the Jews who had returned to Poland after the war and talked about why they had returned.

Another film of his with a great dramatic component.

28. There is a fine line between censorship and good taste and moral responsibility.

In turbulent times, it is difficult to distinguish between freedom of expression and responsibility in one’s words or actions.

29. Many of the films I’ve made probably would have worked just as well 50 years ago, and for this very reason, I have a lot of old-school values.

His work is certainly timeless and imperishable.

30. My father took me to my first movie.

Recalling his tender childhood with whom he discovered his passion.

31. When war comes, two things happen – profits rise far above all perishable goods. This becomes a market for them.

On the real cause of most war conflicts.