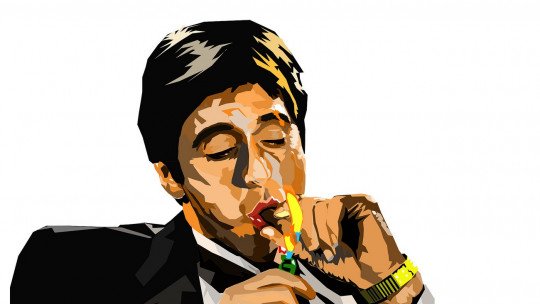 Al Pacino (New York, 1940) is a famous American actor and film director, one of the most acclaimed in recent decades.

His professional career is now more than 50 years old and he has obtained all possible awards and merits. He made a tremendous leap to fame with his role as Michael Corleone in The Godfather (1972), directed by Francis Ford Coppola.

For this method actor, life has not been easy. Born in East Harlem, he had to fight against all odds to become a film legend.

Through this article we will know the best phrases of Al Pacino to get a little closer to the human side of this unique actor who has starred in so many great films.

1. I always tell the truth, even when I lie.

Great line from the character of Tony Montana, a mafia magnate with delusions of grandeur.

2. Vanity is my favorite sin.

From his movie, The Devil’s Advocate.

3. Keep your friends close, but closer to your enemies.

Better to keep them close and watch them carefully.

4. I don’t think vanity has anything to do with being an actor. Acting is less about yourself and more about what you are trying to communicate.

A great reflection by Al Pacino about the profession of actor, commonly associated with people with a certain narcissistic trait.

5. I wasn’t ready for fame. It hit me hard and I didn’t have the capacity to face it.

About its beginnings, when it became tremendously popular overnight.

6. I don’t need a bodyguard. I’m from the South Bronx.

A tough guy raised in one of the most dangerous neighborhoods in New York.

7. There is no happiness, only concentration.

Curious conception about happiness, according to Al Pacino.

8. There have been a lot of doubts and unwanted events in my life.

Several circumstances in Pacino’s life have been cruel.

9. My weaknesses are… I wish I could say something. I’d probably pause just as long if you asked me what my strengths are.

Between humility and boasting, Pacino doesn’t know exactly how to define himself.

10. I have often said that there are two types of actors. The most gregarious and the most shy.

A brief reflection on the personality of the performers.

11. The problem with me is, I guess, the way I express myself. You’d have to be with me 50 years earlier to understand anything I’m talking about.

About their somewhat unique forms and manners.

12. My mother was very important to me. I still miss her.

Here he shows us his most sincere side, missing the one who gave him life.

13. If you come from another planet and ask what an actor is, the answer is Marlon Brando.

An absolute reference in interpretative art.

About the way you act in front of the camera.

His passion is acting, and he makes that clear with this famous phrase.

16. Everyone wanted me to get kicked out of The Godfather, except Francis [Ford Coppola].

In his opinion, all his fellow filmmakers were against him, except the director, who kept him in the role.

Logically, after playing Corleone it was difficult to shed that public image. But he did it.

About money and its usefulness.

19. You will never be alone if you have a book.

Reading is the best of passions, according to this beautiful phrase by Al Pacino.

20. I used to wear costumes, such as hats and false beards just to be able to walk around and avoid attention.

About the time when I was truly terrified of being recognized.

A romantic phrase that the American actor does not seem to have been able to pronounce.

22. For me it is not a question of who you love – a man, a woman – it is the fact that you love. That’s what really matters.

23. Sometimes it is better to be with the devil you know than with the angel you do not know.

24. I have never liked recognition, questions, publicity. I’ve often felt like running away and hiding.

Another phrase from Pacino in which he shows us that he does not enjoy being known.

25. The hardest thing about being famous is that people are always nice to you. You’re in a conversation and everyone agrees with what you say, even if you say something totally crazy. You need people who can tell you what you don’t want to hear.

One of the drawbacks of being Al Pacino: no one disagrees with you.

26. Power exhausts the powerless. (The Godfather)

Only the victims curse it.

27. Try to always think as those around you think, with that basis everything is possible. (The Godfather)

Anticipating the movements of others is the key to a good strategist.

28. I’ll tell you something about God: he’s the worst landlord in the world.

Ironic phrase that makes us intuit his atheism.

29. Now I’m very shy. I wear sunglasses wherever I go.

About his unwillingness to be recognized in public places.

Three maxims for a life without shocks or unfulfilled expectations.

31. I’m an actor, not a star. Stars are people who live in Hollywood and have heart-shaped pools.

His vision of fame.

It exudes a certain nostalgia for the noble art of the theatre.

A brutal comparison with the British writer.

34. Embodying a character is an illusion and I feel that when you know a lot about a person, possibly part of that illusion is broken.

In love with his craft, he draws this parallel with real life.

35. The actor becomes an emotional athlete. The process is painful: my personal life suffers.

About the suffering associated with playing certain characters.

36. Living in the Bronx teaches you that life is hard, but you must be hardened to face it.

Extracted from an interview, she talks about her origins.