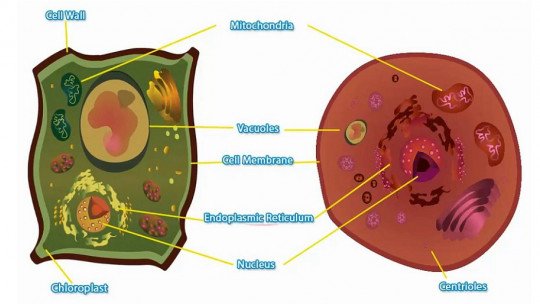 All living beings share the same basic unit, which is none other than the cell. From the smallest unicellular microorganisms to the most complex multi-cellular organisms, the cell is always present. But just because everything has the same unity, it doesn’t mean it’s the same for everyone.

Animals and plants are the living things that have the most complex type of interactions between cells; these microscopic bodies organize themselves to form specialized tissues and organs. But a plant is very different from an animal, and these differences can already be seen at the cellular level. In this article we will review the differences between animal and plant cells .

Both animal and plant cells are eukaryotic, i.e. their genetic content is isolated in a nucleus , which separates it from the rest and has membranous organelles (complexes that carry out vital functions for this microscopic element). Despite this, specific characteristics are observed that allow us to distinguish between plant and animal cells.

Some of these differences are so striking that in the field of histology (tissue study), with a look at a tissue sample under a microscope it is possible to know whether it comes from a plant or an animal . Let’s see what they are

All the cells have a membrane formed by two rows that separate the interior from the exterior . Having a second layer covering the cell is no longer so common, and here lies a difference between animal and plant cells. While the former have no secondary layer, plant cells do have, the so-called cell wall of cellulose. This rigid structure provides protection (as in bacteria) and offers sustainability to tissues, because the wall acts as the foundation for cell organisation.

Animal tissues are also made up of networks of cells, although they lack the cell wall. But instead, they have the extracellular matrix, which is not seen in plant tissues. This space is formed by structural proteins, such as collagen, which provides a means of connecting the cells to each other and giving shape to the tissues. Despite their differences, the cell wall and the extracellular matrix share functions (structure support).

A related issue that offers differences between animal and plant cells is the process of cell division, whether it is mitosis or meiosis. When the cell is split in two , the mechanism used is different.

The main characteristic of plants is their ability to obtain energy from sunlight, in other words, they can perform photosynthesis. This is possible due to the presence in the plant cells of an exclusive organelle, known as chloroplast , which is in charge of the process of photosynthesis with the use of the chlorophyll pigment, the one responsible for the green colour of the plant’s leaves and some algae.

Having the cell wall has its advantages as well as disadvantages. As they are isolated, the transit of particles in the cells is limited, although it is not so necessary because they carry out the photosynthesis , that is to say, it does not need an external power source. On the other hand, animal cells have no other way to obtain energy than the capture of external substances by their membrane.

In order to assimilate products, the cells carry out phagocytosis, a process that leads to the cell membrane generating a vacuole or vesicle with the particle inside and then transporting this “package” inside to be digested. In a similar way to the stomach, it is necessary for the captured particle to break down into smaller components to absorb them, and for this it is necessary to add enzymes (proteins with catalytic capacity) that digest the substance. These enzymes are transported in vesicles known as lysosomes , and so far their presence has not been observed in plant cells.

The cytoskeleton is an important element of the cells. It is a network of structural filamentous proteins that maintain the shape of the cell, transport organelles and vesicles through the cytosol (internal medium of the cell) and play an important role in cell division.

Although it is a common element, differences are found between animal and plant cells. In the former, forming part of the cytoskeleton is an organelle known as the centriolus . This cylinder-shaped structure is responsible for cell movement by means of cilia and flagella (filamentous structures of the membrane that allow it to move). It appears that no centrioles have been found in plant cells, just as there are no mobile cells (the cell wall prevents movement).